« Did You See That Sunset? 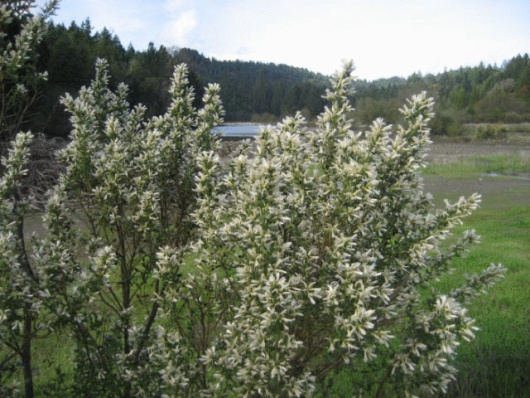 It is Wildflower Wednesday. Wildflowers tuck themselves into shadows and throw themselves in brightly colored blankets over the meadows of Humboldt. Cheryl Lisin of the Lost Coast Interpretive Association (see the beautiful Facebook page here) has offered to do a series to help us learn to identify some of them.

Cheryl Lisin described this plant below:

Coyote brush, Baccharis pilularis, blooms in late fall and early winter. This time of year it is one of the few sources of nectar for small butterflies, predatory wasps and flies. It is dioecous, that is, plants have either only male flowers or female flowers. Male plants have yellowish ray flowers and are not showy. Plants with female flowers can be showy, covered in fluffy white flowers. The fluff, called pappus, is similar to that of the dandylion and helps disperse the seeds in the wind. Both male and female flowers are in heads that have bracts, called phyllaries, at their base, which look somewhat like minature artichokes. Like dandylion and artichoke, coyote brush is in the aster family, Asteraceae.

Coyote brush grows from right along the coast, where it is sometimes a dwarf form, to the Sierras, and from Oregon into Northern Mexico. It grows in many habitats, coastal, chapparal, prairie, woodland, but does not do well in shade. It is a pioneer plant, being one of the first to grow after fire, clearcutting or other disturbance.