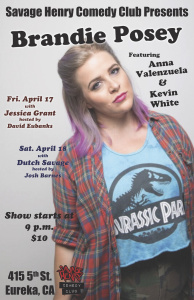 Originally from Annapolis, Maryland, Brandie Posey is a stand up comedian, writer and producer who now calls LA’s comedy scene home. She has been featured as a performer at the Bentzen Ball, New York Comedy Festival, RIOT Comedy Festival, San Francisco Sketchfest, FEST in Gainesville, Bridgetown Comedy Festival, High Plains in Denver, among many others. She has opened for all of your favorite comics, including Kyle Kinane, Maria Bamford and the legendary punk band Against Me! Brandie has appeared on MTV, E! and Comedy Central. She made her feature film debut in the indie dark comedy, “The Worst Year Of My Life” directed by Jonathan Smith and her first stand up record Opinion Cave debuted at #1 on iTunes & #12 on Billboard.com. Brandie’s comedic style has been described as a “Riot Grrl on acid”. Brandie tours the country, headlining every dark corner with a microphone that will have her - from a basement in Whitesburg, KY to the stages of the Kennedy Center (twice!). She is the co-creator & host of Picture This!, the popular comedy-animation show with consistently sold out shows in Los Angeles & New York. In 2018 Picture This! shot a pilot for TruTV in partnership with Page Hurwitz & Wanda Sykes’ Push It Productions. At the Upright Citizens Brigade Theatre & The Hollywood Improv, Brandie co-hosts Lady to Lady alongside Barbara Gray & Tess Barker. Lady to Lady is also a celebrated weekly podcast with over 7 million downloads & loyal fans around the world. Featuring Anna Vanenzuela and Kevin White. Dutch Savage opens. Josh Barnes hosts. $10