The First Feed of Weed: 'Soil Bae' is the Face of a Changing Industry 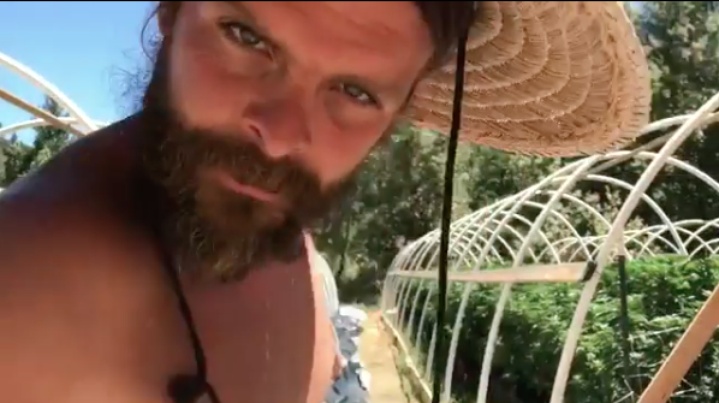 After decades of cannabis growers living underground, only popping their heads up at town meetings long enough to tout the industry’s unofficial company line of “victimized farmers,” and “weepy medicine givers,” a video surfaced on Facebook last month that made me feel something for weed that I hadn’t since I was a teenager. Enthusiasm.

I’ll get to the video in a minute, but before you all take offense to my opening statement and run me out of town with scissor pitchforks and blunt torches, let me say this: Yes, cannabis has many medical purposes and is a blessing for people all over the world suffering from serious disease. There’s plenty of research to back you up on that subject, and a huge majority of the country would not argue that producing medical marijuana can be a noble endeavor.

With that said, it’s time to face the facts, farmers: In less than six months, selling recreational marijuana will be legal in California and when I go to the store to buy my first pack of wacky tabacky I don’t want a carton with a self-righteous sob story printed on the back.

Weed, like most legalized drugs people seek out, is cool. A million arguments can be made that drugs are bad, and we probably all know someone who’s life was ruined by one or all of them. But like them or not, there’s no arguing that drugs have a strong track record of being cool. Alcohol and tobacco companies figured this out a long time ago and promoted themselves accordingly.

We all remember Joe Camel, the Budweiser Frogs and the Most Interesting Man in the World — who’s now friends with Obama, by the way. For reals, Google it!

So with recreational weed looming over the Emerald Triangle, maybe it’s time for the local industry to undergo a public image facelift. Open up, have fun, and get us excited about pot!

At this point, you’ve probably seen the Facebook video of Mendo grower Sean Whaling dancing to “Pull Up the Roots,” by the Talking Heads, as he sprinkles handfuls of soil into pots and rubs it across his bare chest.

After being shared by the popular local Facebook page “Only in Humboldt,” the video became an internet sensation, and as of Sunday, it has more than 10 million views on Facebook — MILLION! (LoCO is jelly).

But what struck me most about the video wasn’t the amount of clicks. It was its bold counter-culture attitude. Traditionally speaking, it goes against the age-old grower tradition of keeping it secret, keeping it safe.

Many local growers are still freaked out by helicopters, let alone the fact that anyone with internet access can zoom right into their backyards on Google Maps and see exactly how many hoop houses they’ve erected this season.

For many years there’s been two Humboldts — Those in the weed industry, and those who aren’t. And if you’re an “aren’t,” the “are” would have thanked you kindly to mind your own business. But now that growers can head to the county office and file a permit, the secrets of the hills have become a matter of public record.

In short, the video is a summation of California’s changing marijuana industry. It represents a new legal era where growers are no different than tobacco farmers or those people with roadside fruit stands. The ones that always lure you in with colorful hand-painted signs.

In an effort to figure out the intentions behind the video, I reached out to Whaling through  Facebook Messenger and asked him how it all started.

“I kinda wanted to show the hard work I’ve been doing, just making fun of what a really hard job it is,” Whaling wrote. “People up here know that. So I knew it would get mixed reactions, didn’t know it would go so far as to be shared over 100,000 times and viewed 10 million!! I’ve gotten a lot of [Instagram] followers in the last few weeks.”

Through his internet fame, Whaling earned the nickname “Soil Bae,” a parody of the viral video legend, Salt Bae. And he’s ran with it. Since the first popular video, Whaling’s produced roughly 10 others, all of him grooving to music while tending to his grow.

“I guess the industry was looking for a new celeb,” he laughed. “I love it. I want to help promote positive, hardworking vibes in the community and company I’m working with, show people we can have fun doing this — plus the ladies like the shirtless dancing guy.”

When asked if these videos were a sign of the industry relaxing now that it’s going legit, Whaling agreed.

“I think so,” he said. “My boss is happy to see people laugh when it has always been a serious business … Definitely changing times.”

An employee of Emerald Cup Genetics, the Bae is now trying to use his character to promote his work’s upcoming event, encouraging growers to submit their own Soil Bae videos on social media using the hashtag #SoilBaeChallenge. The makers of the best video will win tickets to the Cannabis Country Fair, happening July 21-23 at Black Oak Ranch in Laytonville.

Take note farmers. That’s how you get people interested in your product.

In a digital age, being fun and interesting is the best way to reach people. The days of having your grow busted, as long as you’re not doing shady shit, are probably over.

No one wants to read PR messages about how brave and amazing you all are for growing weed. That might have fit the industry’s agenda before Prop. 64, but let’s be honest, it’s incredibly boring and most people don’t care.

We’ve heard your constant, sometimes warranted whining. And for the most part, we’ve listened. California has been a trailblazer for marijuana since my parents were smoking jazz cigarettes, and now your battle is almost over.

So loosen up, let your hair buns down, and figure out a way to sell Americans like me on your product … The dumber the better. Is smoking marijuana the key to happiness? Behold, the best pot brownie recipe on the internet