Booking Photo of the Day » 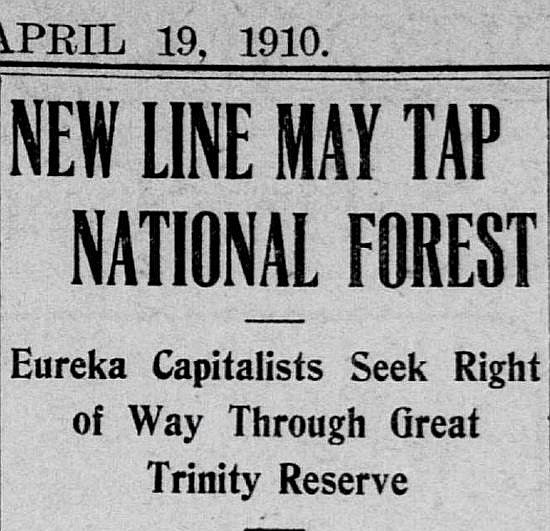 The crazy train pulls into Eureka City Hall tonight, where a curious amalgam of choo-choo fans will seek some kind of boost for its new feverish dream of someone, somewhere, building a whole new railroad line from Eureka to the Central Valley, across the Trinity goddamn Alps. They’re seriously fired up about this!

Earlier in the month, the action was at the Humboldt Bay Harbor, Recreation and Conservation District. The People of the Train wanted the district — nay, demanded the district — to drop a cool $250,000 on this eccentric dream, in the name of jobs and all that is holy. The trainies needed this cash for various feasibility studies and such, since all they’ve got now is map of a possible route that a dude named Jess Lentell drew up 100 years ago. That and a quarter of a million dollars buys you … what?

Not a railroad line itself. Even if Six Rivers National Forest and dozens or hundreds of private landholders forked over right-of-way out of the goodness of their hearts, even if the thing were legally unchallengeable on all conceivable environmental grounds, you’d still be looking at, what — a billion dollars? Billions of dollars? Even Alaska’s famous Bridge to Nowhere was gonna cost as much as $400 million.

So let’s go ahead and provisionally say billions for a train to, uh, Eureka. Who’s forking out that kind of cash for so little these days, and where do I sign up?

In a sign o’ the times, the once train-mad Bay District shot this down unanimously. Even the Fortuna City Council, asked to sign a letter of support for a new west-east rail line a couple of months ago, ended up watering the proposed resolution down to a series a vagaries, removing all mention of this hypothetical new line. Will the Eureka City Council go where Fortuna dared not tread? Stay tuned!

Also on the agenda: You’ve got the medical marijuana dispensary moratorium, of course. Probably more importantly, the city is going to be laying out and probably approving its 2011 Strategic Visioning document, laying out goals and etc. for the coming year. These include the never-ending discussion over Cutten Annexation, the development of the McKay Tract, boosting revenues, booting out the homeless, “keeping families here,” developing the waterfront, updating the city’s general plan, hiring more cops and — I’ll be goddamned! — the never-say-die Waterfront Drive Extension Project, which the Coastal Commission and the Coastal Conservancy have both long promised to torpedo.