Why Do Fortuna Doctors Perform So Many Optional Surgeries?

Compared to the rest of the state, Humboldt County medical patients undergo a whole lot more not-strictly-necessary slicing and dicing at the hands of their medical professionals, according to a study released today by the California Healthcare Foundation. And nowhere is this more true than in the area served by Fortuna’s Redwood Memorial Hospital. 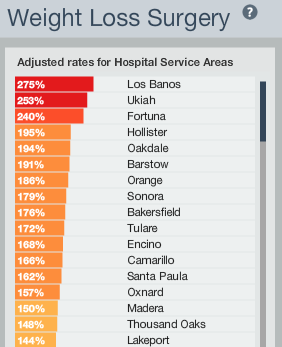 A few moments with the foundation’s handy interactive map shows that Fortuna-area patients get more elective procedures than the state at large in 11 of the 13 categories studied. Sometimes much more. Fortunans are two and a half times more likely to undergo weight loss treatment surgery than Californians generally. They are 2.6 times more likely to undergo an optional coronary artery bypass. They are twice as likely to get knee replacement surgery.

In each case, the study was adjusted for demographic factors such as age, wealth and prevailing rates of particular illnesses. So what does it mean that Fortuna ranks so high? Maribeth Shannon, the director of the California Healthcare Foundation’s Market and Policy Program, told the Lost Coast Outpost this morning that she believed that the variation in these rates across communities is at least partly due to a failure in doctor-patient communication: It has been shown, she said, that when patients fully understand their options they are less likely to opt for elective medical procedures. (See the introduction to the foundation’s study for more on this point.)

It’s often difficult to tell whether a higher rate of elective surgery is “good” or “bad,” Shannon said. Elective weight loss surgery is often a “good” thing, in that it can help prevent serious conditions such as diabetes or heart disease. However, a procedure such as carotid endarterectomy – a rooting-out of the carotid artery, often seen as a stroke-prevention measure – often carries a high degree of risk to the patient. When patients are undergoing the procedure at very high rates – as is the case in both Fortuna and Arcata – it could be that they do not fully understand the options available to them.

Of course, there is a financial element to all of this. In America, doctors are paid according to the number of procedures they perform. While Shannon acknowledged this concern, she said that she doesn’t believe doctors are opening up their patients just to fill their bank accounts: “I chalk it up more to physicians just believing that high interventions are the right thing to do,” she said. But at the macroeconomic level, reducing the number of elective procedures that are not strictly necessary should be a high priority.

“If we really are concerned about the high cost of health care in this country, getting these rates to the right level could have a very beneficial effect,” Shannon said.

Incidentally, Fortuna rated lower than the California average on only two procedures studied, and both of them involved childbirth. Like each of the four Humboldt County hospital service areas studied – Eureka, Arcata, Fortuna and Garberville – the Eel River Valley had fewer childbirths by cesarean section than the state as a whole, and fewer births by C-section following a previous C-section. Fortuna’s healthy ranking in this latter indicator received some ink in this morning’s San Francisco Chronicle.