Grandfather of McClymonds Student, Ferndale Superfan Challenge One Another Over Racism Allegations

For the last couple of weeks, we’ve been talking about a confrontation between Ferndale High football fans and a player for McClymonds High School that happened at a Ferndale home game on Sept. 3. The player — a demure and humble kid, by all accounts — said that he was subjected to racial taunts from the sidelines after being beaten on a play. Mike Martin, one of the Ferndale boosters who regularly roam the sidelines during games, later said that no racial insults were spoken by his fellow fans.

This morning, KSLG’s John Matthews spoke again with Martin and Stephen Walters, the McClymonds player’s grandfather. More on that in a moment.

Some background: The whole incident has been a subject of a great deal of controversy in Ferndale — a town whose high school had an assembly to discuss the display of Confederate flags on campus just a few years ago. The Sept. 3 game was the second straight game in which there were allegations of racial slurs delivered by Ferndale fans to opposing players; the 2010/11 season-ending away game at Salesian High School in Richmond was the first.

As reported in the Ferndale Enterprise last week, Ferndale Unified School District Superintendent Jack Lakin has ordered that, in future, all fans must be kept five feet further away from the sidelines during game play. This may still be somewhat at odds with California Interscholastic Federation rules or recommendations surrounding football.

“What should happen is that people should be a safe distance away, and at a distance where they don’t interfere with the game,” Gil Lemon, commissioner of the CIF Northcoast Section, told the Lost Coast Outpost today. However, Lemon said, that the Northcoast Section had no specific rules mandating fan behavior.

That would appear to contrast with the CIF’s Central Section, apparently the only of the CIF sections to publish its own rules for public perusal:

Last week, the Lost Coast Outpost and other local media outlets came into possession of a videotape of the play that preceded the confrontation between the players and the fans. (The tape cuts off before the confrontation itself takes place.) According to the Ferndale Enterprise, Mike Martin — the fan who insists that no racist taunting happened at that game — has identified himself as the person indicated in the photograph below.

But the tape shows that he appears to be quite a distance from the end zone at the moment the play ends. He doesn’t even appear in the frame: 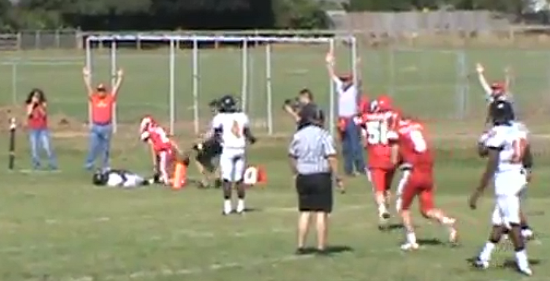 This morning on KSLG, Walters and Martin spoke directly to each other. Walters asked Martin if he would publicly issue a statement that Ferndale boosters would not tolerate the taunting of kids from opposing teams, whether racial or not. Martin declined to do that, but did say that he would write a letter protesting the “black eye” that the town’s reputation has received due to these purportedly unfounded allegations. Martin further revealed that last week he paid an Orange County firm to conduct a “voice stress test” of him over the telephone. The results, he said, proved that he was telling the truth.

Audio of this morning’s interview follows: