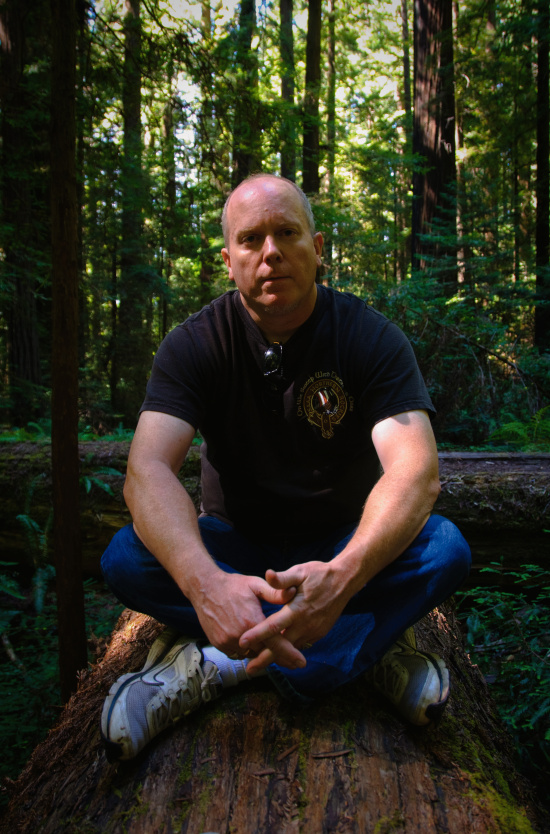 Stewart Kirby grew up in Humboldt in the tiny town of Miranda. He and his brothers as well as his sister Ruthie roamed through the park that rings the town with giant redwood towers. Like hobbits among the Ents, they found a different world than the mundane reality of school and chores. To Kirby, that town, that park, and the Humboldt County of his childhood have permeated his imagination and been spun into his third print novel, The Avenue of the Giants. There, among other colorful characters in his fantastical “Humbaba County,” a robotic Jim Morrison escapes from his makers and another man seeks financial salvation in a huge Woodstock like concert.

Kirby explained, “My overall experience here in Humboldt is distilled in a pretty surreal way. I think of it as Edgar A Poe meets Hunter S. Thompson…. There’s the creepy twisted aspect of the macabre but a political element as well…The surreal aspects are maybe …like the candy coating around the bitter political pill in the middle.  For me a reanimated corpse on a mission of revenge isn’t just about good times, it is also about misguided political shenanigans.”  Kirby’s writing is infused with the land he grew up in. “You write what you know,” he says.  Then adds with a sly grin, “And I know Bigfeet.” The myths, legends and realities of Humboldt Co. intertwine so completely in his work that it is hard to separate them.

Kirby’s liberal politics flavor his writing.  “For me,” he says, “everything is politicized… I see dehumanization happening all the time…I don’t like the corporatized, globalized world and I have something to say about that. But I don’t really feel that I’m preaching. I feel that these are characters and stories that come through me.”

He’s coming to Garberville this Friday,the 10th at 5 P.M. at King Range Books near Ray’s and Woodrose Cafe

“If you can’t make it in Humboldt when you are writing about Humboldt, then you probably won’t make it anywhere….It is a natural fit for me to try to market the stuff that takes place in Humbaba Co. in it’s obvious parallel to Humboldt Co.”