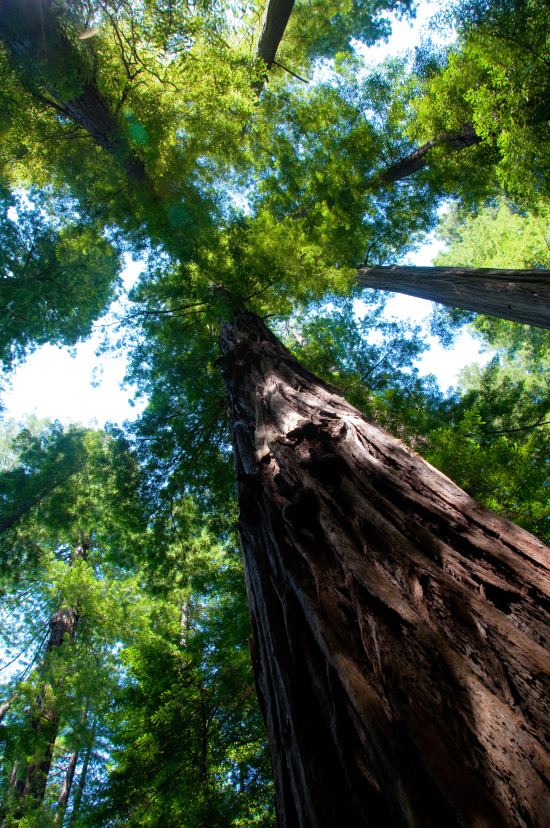 A decision in the Richardson Grove project case has been handed down.  The Superior Court judge, Dale A. Reinholtsen has offered what, in my opinion, appears to be a stinging slap* to EPIC and the other petitioners. The decision begins with the following disclaimer:

Caltrans is  not going to cut down or otherwise remove any old-growth redwoods from Richardson Grove State Park.  There is absolutely no basis in reality for believing that Caltrans “Wants” to “destroy” old-growth redwoods.  The evidence is quite obviously and overwhelmingly to the contrary. There is also no evidence that the project was undertaken to satisfy the needs of “big-box” retailers or “corporate giants.”

One of the first aspects the court spoke to was the safety issue:

The Court is a bit frustrated by Petítioners’ suggestion that safety was Caltrans’s pretextual justification—With the necessary inference being that Caltrans is dishonest or corrupt—­When the safety issue is only muddled because of Caltrans’s respect for the very old-growth redwoods Petitioners so dearly defend. As Petitioners Well know, a true “safety project” on Highway 101 through the Park would require Caltrans to cut down old- growth redwoods….

But Caltrans has not dared to suggest that any redwoods be removed. Indeed, as explained above, Caltrans summarily rejected the idea of building a four-lane road through the Park in 2001 precisely because it would require the removal of old-growth redwoods adjacent to the highway.

Accordingly, Caltrans has candidly disclosed that the Project would require “mandatory design exceptions,” including exceptions to California’s standards for shoulder width, distance to fixed objects, and corner sight distance.., precisely to accommodate the old-growth redwoods that are adjacent to the highway…Human safety yielded to the trees from the outset, as perhaps it should have.

Meanwhile, Caltrans is in the difficult position of attempting to explain that safety requires that the road be broadened and realigned for STAÀ trucks (inasmuch as two STAA trucks currently may collide when traveling in opposite directions…) but, simultaneously, that the Project Will not result in a roadway that meets the state’s minimum design standards. In short, the Court rejects Petitioners’ attempts at capitalizing on the confusion that has necessarily resulted from a project that both promotes safety and, because of the old-growth redwoods, cannot improve the road to meet minimum design standards.

The Court goes on to title an entire section “Substantial Evidence Supports Caltrans Findings of No Significant Effects.” It then follows this up with pointed language saying that it “agrees with much of Caltrans’s analysis of this issue.” According to the Court, “Substantial evidence supports the conclusion that the Project will not actually, and will not potentially, ruin the profound aesthetic experience provided by the old-growth redwoods…”

In only one aspect was the Court concerned about the CEQA (California Environmental Quality Act)—the Court required Caltrans to adopt a recording and monitoring program designed to “ensure compliance during project implementation.” Both sides of the law suit are directed to come to an agreement about what this constitutes.

Natalynne DeLapp the Development Director and Richardson Grove Coordinator of EPIC reacted today to the ruling. “We are disappointed that the State Court did not find the legal errors which we believe are well-documented. Our attorneys are reviewing the decision and will comply with the court’s order.” Still, this ruling isn’t the only one in the case. The ruling earlier this spring by Federal Judge William Alsop keeps them from being dismayed.  “However,” DeLapp explained, “we are comforted by the fact the the Federal Court ruled in favor of the Grove when it found the Caltrans’ analysis was ‘based off false data,’ and ordered them to redo critical aspects of its environmental analysis.”

So what does this mean for the Caltrans’ project? Both sides are working to understand how the State and Federal Courts’ rulings interplay. Caltrans (see press release below) says that they “will be finalizing the re-survey of nearly 1,500 trees ordered by the federal court in its April 2012 decision. Caltrans will be able to provide an estimated completion date of both these aspects later this summer.”

This whole process can be frustratingly slow for the public anxious to understand what the final outcome will be. DeLapp describes it this way.  “It is like a chess game and it is probably boring to watch…  It has been going on for 2 1/2 to 3 years.  One side makes a move and the other counters that… .”

In this State Court ruling, in my opinion, EPIC’s Queen got taken but the “game” isn’t over.

*As always, keep in mind that my husband is, and my father and grandfather were, employed by Caltrans.  I am in favor of the Richardson Grove project.

Note: Also photo of redwoods was taken by Weott.

Eureka – Caltrans announced today that Judge Dale Reinholtsen of the Humboldt County Superior Court has issued a favorable decision for Caltrans in the case of Lotus v. Department of Transportation.  In this case, the Petitioners, a group of individuals and organizations, challenged Caltrans’ Environmental Impact Statement for the Richardson Grove Improvement Project.  The Court stated at the beginning of today’s decision:

“Caltrans is not going to cut down or otherwise remove any old-growth redwoods from Richardson Grove State Park…  There is absolutely no basis in reality for believing that Caltrans ‘wants’ to ‘destroy’ old-growth redwoods. The evidence is quite obviously and overwhelmingly to the contrary.”

The decision concludes that “[t]he Court has not found a violation of CEQA [California Environmental Quality Act] at this time.”  In its 30 page opinion, the Court addressed and rejected the allegations in the Petitioners’ challenge to Caltrans’ analysis in its Environmental Impact Report.  The Court decided that it needed additional information regarding only one aspect of the project: it asked Caltrans to show that it has adopted a reporting or monitoring program that is designed to ensure that it will employ the impact minimization measures discussed in its environmental study.  The parties were requested to meet and agree on the timing for Caltrans to present this additional information to the Court.

Today’s ruling brings the challenges to the project a major step closer to resolution.  Route 101 at Richardson Grove has been under study for more than ten years and Richardson Grove Improvement Project has been actively in development since 2006. Minor changes to the existing alignment will be made without removal of any old growth redwood trees in order to allow industry-standard sized truck access along this portion of Route 101.  As the court emphasized in its decision, the project was planned and designed to avoid removing any old-growth trees, and many measures are in place to protect the surrounding trees throughout the area.

In light of the Court’s ruling substantially rejecting the Petitioner’s arguments, Caltrans will proceed as soon as possible to comply with the State Court’s remaining request.  In addition, Caltrans will be finalizing the re-survey of nearly 1,500 trees ordered by the federal court in its April 2012 decision.  Caltrans will be able to provide an estimated completion date of both these aspects later this summer.

Caltrans’ mission is to improve mobility across California, including the North Coast. Route 101 through Richardson Grove is a beautiful area that Caltrans has a long history of maintaining.  The Court’s decision confirms the importance of that need. Caltrans is committed to delivering the least impactful alternative to accomplishing transportation goals that balance environmental protection and the economic needs of the entire region.

Caltrans maintains a web page with more information about the project at: www.dot.ca.gov/dist1/d1projects/richardson_grove/