« Field Trip! Whimsy in the Dunes

Norman Solomon Moves Closer, Yet Still So Far Away; Only 596 Votes Behind Roberts »

The Times-Standard Salutes the Youth of Today

On and on it sounds: The mainstream media death knell, forever announcing the end of the family newspaper. But if you know anyone who celebrates its imminent demise, go and throw a copy of Saturday’s Times-Standard in their face. Was the Lost Coast Outpost or any other so-called “blog” on hand to toast the Eureka High Graduating Class of 2012? It was not. They were not.

The Times-Standard was. And that’s important.

Your Lost Coast Outpost hears a lot from the county’s conservative establishment about how we are losing our children. They move to the city and, whether for want of a job at Home Depot or the crucial lack of an East-West rail line, we never ever see them again.

Maybe Father’s Day has left us a little maudlin, but these days it seems to the LoCO that maybe the conservatives have a point. Leave aside the decimation of our medical establishment — where will our hometown newspaper be 10 or 20 years from now, if the Marina Center and a rail corridor to Redding are not built? Who will celebrate the Class of 2022 in the ghost town left behind?

So let us salute the Times-Standard and Eureka High’s Class of 2012, and one special member of that class in particular, with a close-up of Saturday’s front page. Step forward, graduating senior Jared West! 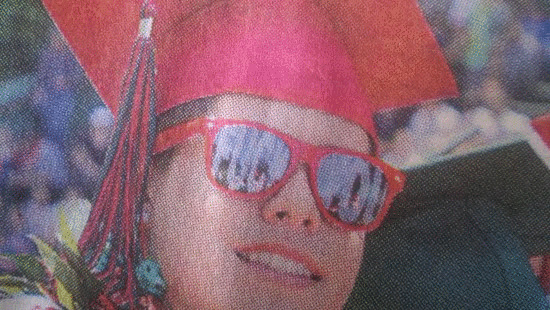 *SNIFF*! The world is your oyster, Jared! Don’t forget your roots!