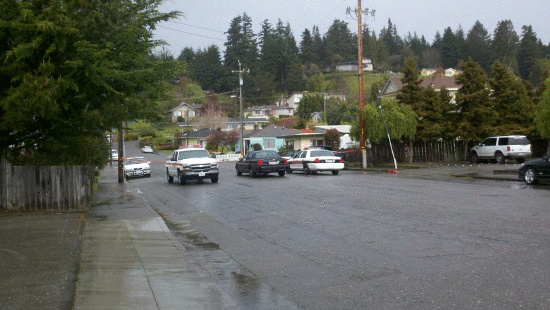 We’ve been trying to get information from the Fortuna Police Department on the Coroner’s Office, but so far we haven’t received calls back. So far the Times-Standard and KIEM have the best coverage of the strange incident early this morning, in which a man apparently ran amok in a quiet Fortuna neighborhood, screaming and pounding on doors, before fighting with responding Fortuna police officers, who ended up shooting him dead.

The above photo was taken by KHUM’s Larry Trask within the last hour. The Critical Incident Response Team — the inter-agency force that investigates all officer shootings in Humboldt County — is still investigating the case, and has several blocks of Eleventh Street around O and P streets blocked off.