In Defense of Stacey Lawson » 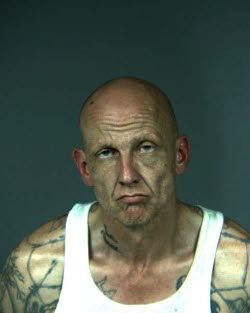 On 12/20/11, Eureka Police Department officers received a tip there was a subject with methamphetamine and guns staying at a motel on 4th Street in Eureka. Three patrol officers responded to the motel and upon further investigation identified the suspect’s room number. The officers subsequently entered the room to conduct a parole compliance check and search. They found the room momentarily unoccupied.

The officers observed a small quantity of methamphetamine and drug packaging materials in the room. They also located a loaded Hi-Point .40 caliber semi-automatic handgun in the room’s safe along with an unloaded Bryco .380 auto pistol.

While the officers were still inside, a male and two females returned to the room. The subjects were detained. The male, Brian Christopher Fleming, was identified as one of the room’s guests. Officers located a taser/stun gun and nearly 6 grams of methamphetamine on his person. Fleming was arrested and transported to the Humboldt County Correctional Facility where he was booked for possession of methamphetamine for sale, unlawful possession of a firearm by a convicted felon, and unlawful possession of a stun gun by a convicted felon. Fleming later posted bail and was released from jail.

During the ensuing months, EPD’s Problem Oriented Policing Unit (POP) received information Fleming was selling methamphetamine from his residence located near Myrtle and Hall Avenues. POP subsequently sought and obtained a search warrant from a Humboldt County Superior Court Judge for Fleming and three associated residences. The residences, which were on adjacent parcels, were all owned by Fleming’s mother. (2700 block of Myrtle Ave., 2500 and 2600 blocks of Hall Ave.). 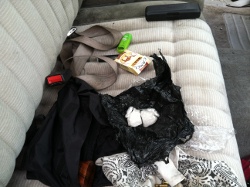 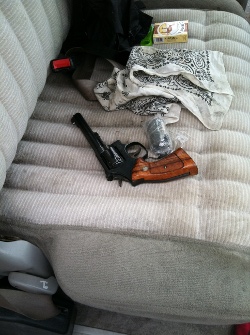 On 05/24/12, at about 11:19 AM, POP investigators observed Fleming leave his residence traveling westbound on Myrtle Avenue in a white Chevrolet pick-up truck. Officers initiated a traffic stop on Fleming on the 2700 block of Hubbard Lane, Eureka. Fleming was detained. During a subsequent search of his vehicle pursuant to the warrant, investigators located a loaded .22 caliber revolver on the seat next to where Fleming had been seated. Investigators also found over one ounce (33.8 grams gross weight) of crystal methamphetamine packaged for sale in 4 baggies inside the truck.

POP investigators, assisted by Special Agents with the Humboldt County Drug Task Force, then responded to Fleming’s residence to execute the search warrant on three houses and several outbuildings there. They were also accompanied by one of the officers involved in Fleming’s December arrest.

Fleming (age 49) was arrested and transported to the Humboldt County Correctional Facility where he was booked for possession of methamphetamine for sale, transportation of a controlled substance, possession of a controlled substance while armed, and unlawful possession of a firearm by a convicted felon. Additionally, a penalty enhancement was added to Fleming’s charges due to his arrest on a new felony offense while still out on bail from his previous felony arrest. Fleming’s bail was set at $75,000.00.