« 3.2 Trembler Near Willow Creek—Dozens of Earthquakes in Calif. This Week

Man and Woman Kidnapped and Assaulted » 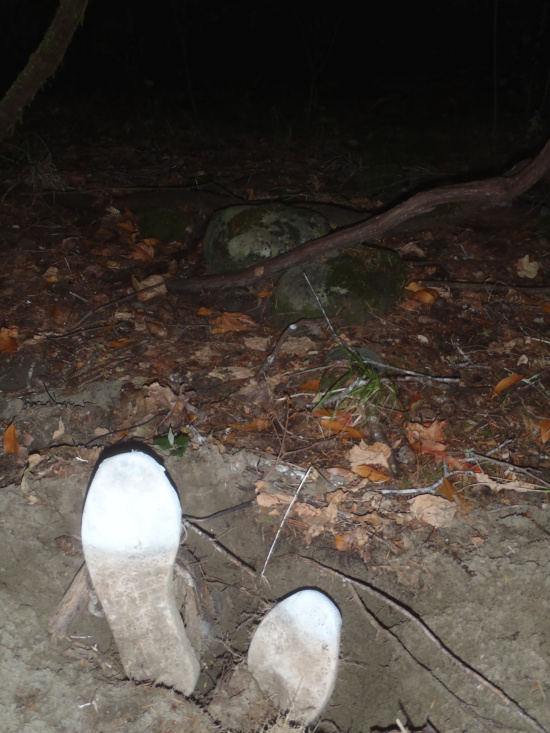 Photo taken after the shoe had first been removed and the bones discovered.  The shoe was set upright in the approximate original position in order to show how the scene originally appeared.

(Photos in this article provided by anonymous witness)

The bleached white tips of the skeleton’s sneakers poked up through the ground as if they had kicked through the soil around them.  The first sneaker protruded through the leaves for several years.  The second had only thrust into the air sometime recently.

A local family who lived nearby kayaked frequently to the beautiful little flat, exploring, and mushroom hunting. (See here for yesterday’s full story) The family dismissed the sight of the first shoe as nothing more than “river trash” and even made casual jokes about there being a “body attached.” But when the man and the 8 year old girl discovered a second slightly lower white tip sticking out two days ago, on October 29th, the man dug into the ground with a stick and then his hands exposing two entire shoes.

Could this be a prank, he wondered, or was this really a body?  Barely able to believe what he was seeing, he struggled to dislodge one shoe from its resting place. The daughter, explained the wife, “was climbing on some vines and trees nearby. She was aware that he was digging up the shoe we had seen for years. They believed they were removing trash that had been too buried to dig up previously. But I think they both knew, in a very unbelieving sort of way – it could have been attached to something…”

“When my husband pulled the shoe out,” explained the wife who prefers the family remain anonymous, “he thought it had roots grown into it and had to really pull. At that point the foot came off the leg-bone…The husband dumped out the shoe discovering both a sock and foot bones. “…[He] was just freaked out and full of disbelief. He was focused on the bones in the shoe, the sock, could they really be from a skeleton. There was still dirt in the hole around.”  This hid the leg-bone from his sight.  He and his wife discovered that fact when they returned later.

“Once he found the bones, they were put in an empty bag he had with him,” explained the wife. “…When I went back with him to confirm [around dusk,] we brought a little shovel and dug out a little more until we could see the [leg-bone. It was only a round little end…but it was obviously a bone leading up the leg …[and we] could see there was a leg-bone going up inside what looked like denim pants. That is what confirmed to us we really were seeing a human body and it was time to call the police about it.”

First, the couple tried to reconstruct the scene a bit for a photo to show what they had seen to the police. “We placed the sneaker back in place to take that first picture. I turned it sideways to show the type of sneaker to take the 2nd one [see below],” described the wife.

After spending a restless night, early on the day before Halloween, the wife phoned law enforcement. “I called in to the sheriff switchboard at 6:59 but they never called back and only showed up a few hours later. He seemed suspicious that it might be a Halloween joke….first thing we did was give him the bones….and show him the pictures. He totally believed us at that point… .”

Yesterday, a Mendocino Co. deputy sheriff and a detective secured the scene and made arrangements for an anthropologist to come from Chico State University and bring students to assist in excavating the grave site.

This morning, during the day on Halloween, about 8:30 A.M., the wife took a photo of the crime scene where the investigators were already beginning work. 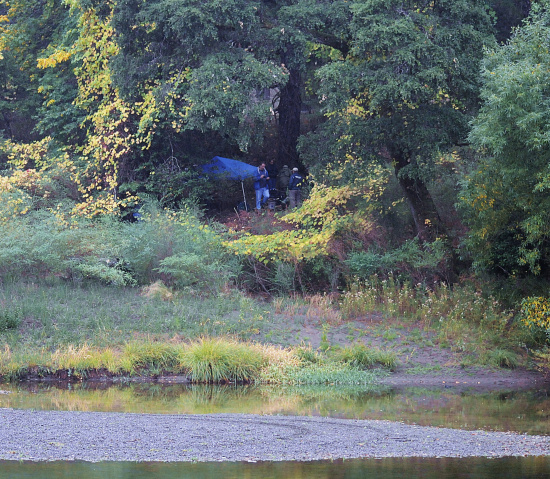 Investigation of the burial site not far from Hwy 271

According to the wife, a friend told her, “Being Halloween - the veil has thinned enough for him to be found…’ and I like that thought……he was ready to be found and the veil got thin enough.” She hopes the photos will provide information that will help some family put to rest their questions. “I am a documentor,” she says. “That’s what I do in this life. Part of my life was documented through words and photos but right now I mostly document with photos. That photo tells far more than any words can. A good documentor does not judge but just documents unbiased. Mostly I do nature but right now that skeleton is part of the nature in my backyard.” 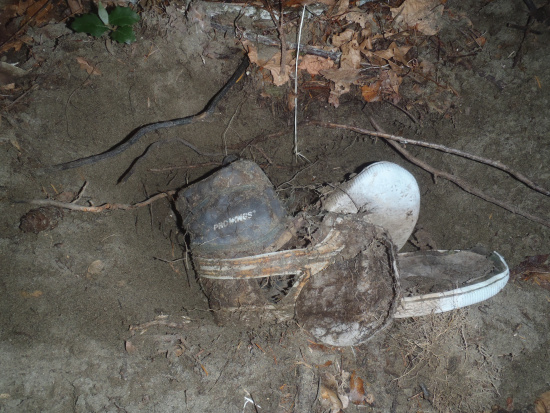 Closeup of the shoes.  The brand is Pro Wings and they are shown as men’s in one internet site.

If you believe you may have information about this story please contact the Mendocino Sheriff’s Dept at 707-234-2100 or you may contact me (mskymkemp@gmail.com .)