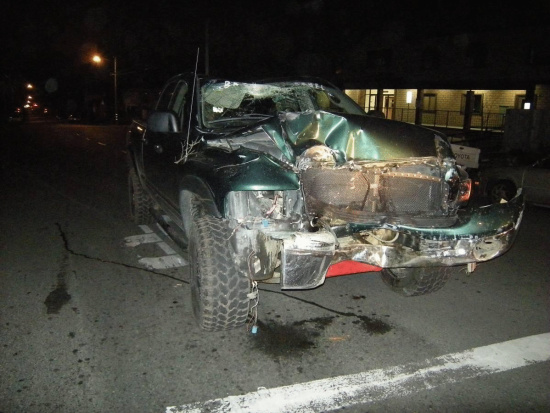 On 3-10-13 at about 5:09am Officers were dispatched to the intersection of Buhne and “I” streets on the report of a hit and run that just occurred. Upon arrival Officers located a tremendous amount of property damage including: signal light pole down in the road, damaged fencing to a residence, damage to the chain link fence at Carson Park, and a large tree nearly pushed over, and misc. vehicle debris belonging to a Dodge truck.

The registered owner of the truck, Chelsea Eisenberg was contacted at Wabash and “E” streets where the Dodge finally stopped running. She explained to investigating Officers that she was driving the Dodge when the collision occurred and was attempting to follow a car that “came out of nowhere” that caused her to crash. After speaking with her for a while Officers suspected that she was providing false information due to numerous inconsistencies with her statement.

Eisenberg then told Officers that her fiancé, Julio Gonzalez was driving the truck when he crashed at Buhne and “I” streets. She said that Gonzalez was at their home a few blocks away. Officers were unsuccessful in contacting Gonzalez that night. Gonzalez was determined to have a suspended driver’s license.

Officers spoke with Gonzalez a couple days later. He told the Officers that he was driving home when he fell asleep and crashed the truck. He said he left the scene because he has a suspended driver’s license.

The investigating Officer will submit a report to the District Attorney’s Office requesting the following charges: