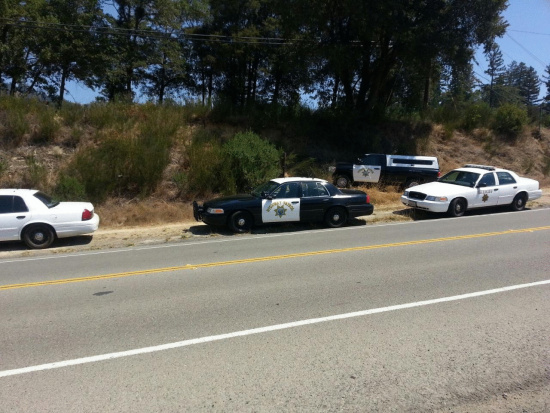 According to a CHP spokesperson, yesterday afternoon, CHP officers noted a driver in a vehicle with expired registration tags. They attempted to stop the vehicle.  The driver fled up a dirt road into a brushy area just to the north of Garberville where some of the homeless community has been camping. The driver, Matthew Lazar Merritt, with an unidentified male passenger began to flee on foot. The unidentified passenger escaped.  Mr. Merrit was arrested for driving without a license and resisting arrest.

Sgt. Kenny Swithenbank of the Humboldt County Sheriff’s Office said that he and several of his officers also went to the encampment. (See yesterday’s piece here.) They notified the inhabitants that the Sheriff’s Office had been in contact with the owners of the property and the campers were trespassing. The officers informed the campers they needed to leave. According to Swithenbank, he again contacted the owners of the property who he said were “very adamant that no permission has ever been given, or will ever be given to allow anyone to camp on his property.”

The suspect’s vehicle was towed.