« Apparently Most of You Did Drive Safely—DUI Checkpoint Nets One

Fires and Smoke across Northern California

Screenshot of fires currently burning in Northern California. To the left is the Dance Fire which is fully contained. It is near the town of Orleans.  The middle area is the Butler Fire with a spot fire in the northeast area.  To the right is the Salmon River Complex which started at the same time as the Butler Fire. The latter two complexes started on the 29th and detected within hours of each other.

Three areas burn within a relatively few short miles of each other in northern Humboldt and southern Siskiyou. The fires have consumed about 3000 acres and are spewing smoke across the region. (See image produced by the US National Weather Service in Medford below.) The Dance Fire, which is now contained but not out, and the Butler Fire are in Humboldt--the Salmon River Complex in Siskiyou. The Dance and Butler Fires have been combined for purposes of fire management into what is called the Orleans Complex. 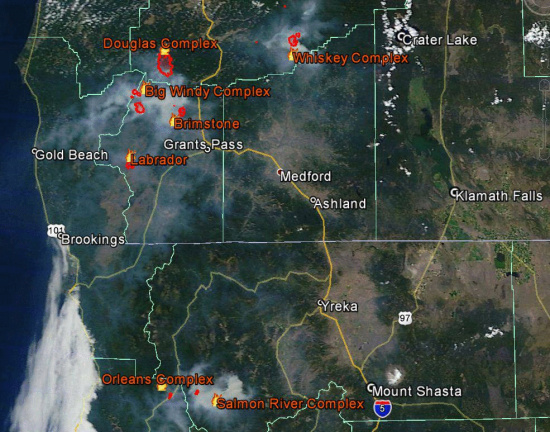 Smoke from Oregon fires and from the Orleans Complex as well as the Salmon River Complex drifts across Northern California. (The white area along the coast is clouds not smoke.)

The terrain there is extremely steep and remote. Firefighters are struggling to contain the fires that started in these areas. The Butler Fire is 0% contained and the Salmon River Complex is only 5 % contained.

There are huge columns of fire burning on the Salmon River Complex.  In fact, the Medford branch of the US National Weather Service put out the graphic below showing what they called “an impressive double pyrocumulus on the Salmon River Complex” that showed up on satellite photos yesterday evening. “Pyrocumulus,” they wrote, “are cumulus cloud generated by the heat of the fire and can grow into thunderstorms under the right conditions. Using radar we can estimate that these pyrocumulus peaked at a height of around 30,000 feet this evening!” 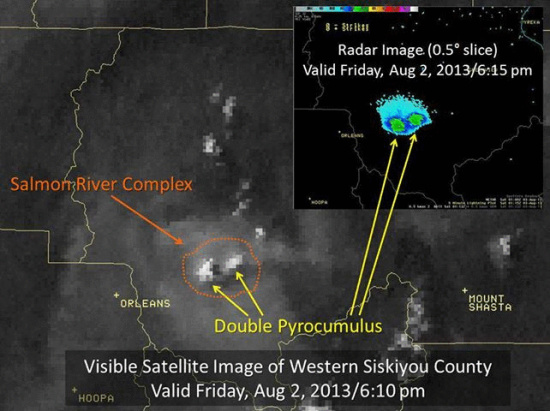 Satellite Image of the Salmon River Complex that shows clouds forming from the heat of the fire.  These clouds can generate lightning when conditions are right.

A resident near the Butler fire, Creek Hanauer explained the impact of fire on the community. While traffic is moving normally in some areas, he said, in others “we are blocked off.” The smoke envelops the town in a dark cover.  Many in the community use solar to generate their electricity and are having difficulty getting much power. Even though Hanauer lives seven miles from the fire, he says, “I’ve got a lot of ash at my house.”

“If it stays this smokey, in a week or two the maples will start to turn,” he explained. “It is so dark it is like a nuclear winter,” he said and noted that several years ago researchers actually came to the area during thick smoke cover from another fire to study how a nuclear winter would affect plant life, etc.

But most troubling of all, he said, is that the Forks of the Salmon’s teacher lives in the house most in danger. “We have one house exposed,” he explained, “Our teacher lives there. Our hearts are thumping for her. Local folks have been working their bums off trying to get [the house] as prepared as possible.  …Fire can come at her from the bottom or the top. They are doing things like weedeating and laying hose and cutting brush…. Taking leaves off her roof.”

Hanauer expressed some frustration with the professional forestry firefighting teams. He says that after the initial push where local fighters are invaluable before the teams come in, the local guys are pushed aside. People are even having trouble getting to areas like the local teacher’s home to help her prepare. They are stopped by the forest service. “Those guys are doing a hell of a fine job,” he admits, “but not to be have a real clear active participation is hard.  Bitterly unsatisfactory.”

Nonetheless, locals are still finding ways to take a supporting position and trying to be ready to defend their homes. Says, Hanauer, “People are staying in contact, making sandwiches for the crews, doing what thy can, until the other shoe drops.” 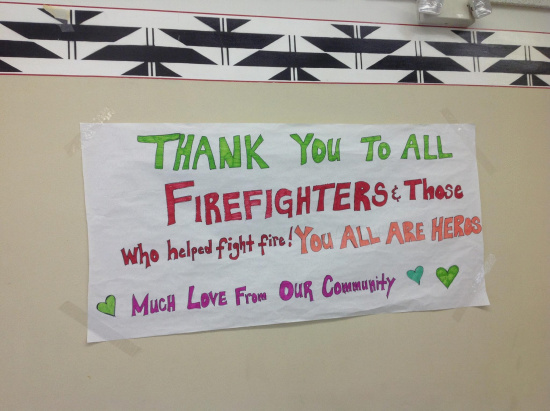 Karuk youth in Orleans thank the both the local and the forestry firefighters. (Photo courtesy of Angela McLaughlin.)

Additional information which may be of interest including information on air quality concerns and a press release from the Salmon River Complex is included below. Also there is a list of previous stories on these fires which contain photos and information that could be helpful. 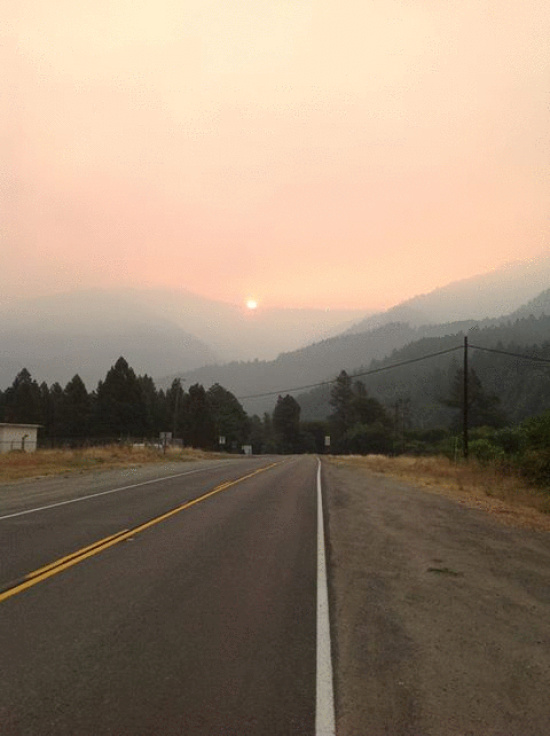 Recent lightning storms have started wildfires all over the region. Though most of these fires are in Southern Oregon, smoke is impacting residents and visitors in Northern California.

People with respiratory issues should be especially cautious, but everybody is susceptible to effects from unhealthy air quality. There are a number of services and resources to help cope with the situation.

To help people plan outdoor activities, the Forest Service is working with Siskiyou County Air Quality Management District, Public Health and Office of Emergency Services to deploy additional air quality monitors in the area. There are now monitors in Yreka, Happy Camp, Weed, McCloud and Orleans, CA providing real-time data via satellite to anyone interested. This information is available athttp://app.airsis.com/usfs/fleet.aspx. Another Forest Service monitor is scheduled for deployment in the Butte Valley over the weekend to come online early next week.

Siskiyou County offers a number of resources to support residents and visitors. The county Website athttp://www.co.siskiyou.ca.us/default.aspx has a number of useful links and other information. People without Web access can call Air Pollution Specialist, Eric Olson at 530-841-4029 or Assistant Air Pollution Control Officer, Eldon Beck at 530-841-4029 for updates and advice.

The Karuk tribe has been operating a clean air shelter when conditions dictate at their Department of Natural Resources building in Orleans. Call 530-627-3446 to see if the center is open.

Due to more accurate mapping, the ‪#‎ButlerFire‬ is now mapped at 851 acres. This increased the total acres for the Orleans Complex to 1,428 acres. The fire is backing into Grant and Lewis Creek drainages and has reached the bottom of Lewis Creek drainage on the lower half. It has also started to back into Butler Creek. Last night saw moderate fire activity as heavy fuels burned throughout the night with isolated tree torching.

The following closures are in effect:

A primary focus for the Butler Fire continues to be structure protection along the Salmon River, from Oak Bottom to Nordheimer Flat. Fire continues to burn mostly on the south side of the Salmon River in the remote area east of Butler Flat. The spot fire on the north side of the river remains at approximately ¼ acre. The fire has progressed slowly to the mouth of Lewis Creek and along the ridge of Butler Mountain.  Crews are continuing to assess potential fire containment lines and to begin work clearing those lines. Challenges to fire fighters include extremely rugged, steep terrain and limited access to the fire area. Rolling rocks, large boulders and debris continue to pose safety concerns.

This will be the last update from Norcal Team 2 on the Dance Fire.
Summary:Crews continue mop-up and patrol. Visitors and residents will continue to see smoke within the fire perimeter. The Six Rivers National Forest will assume command of the Dance Fire at 6:00 a.m. on August 4, 2013.

Note: There was a new fire start in Willow Creek last night, which was held to approximately 2 acres.


Please see http://www.inciweb.org/incident/3577/# for updates and a map of the Orleans Complex.