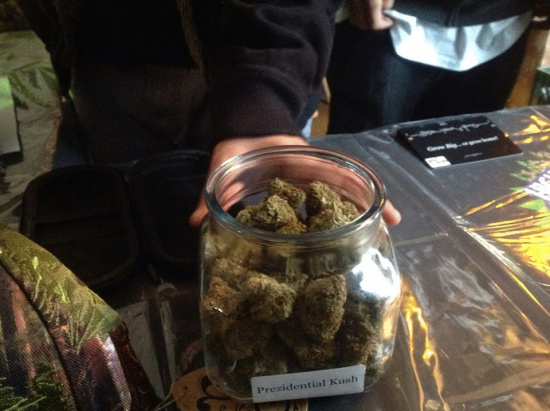 Another new year is upon us. At this point in our grand human experience, legalizing weed in California is pretty much a no-brainer. As of this blog post, we’ve got four, count ‘em four legalization initiatives that might just qualify for our state’s 2014 ballot. It’s game on, people. Let’s get our shit together on this. (Seriously, can you imagine how EPIC a Humboldt County cannabis farmers’ market will be?)

Already, many, many thousands of people in California take advantage of Prop 215. Note: When I say “take advantage of,” I use the phrase in the second sense provided by my computer’s handy Oxford English Dictionary: “make good use of the opportunities offered by (something).” People may think medicinal use of cannabis is legitimate only for those who are devastatingly ill. But here’s the deal: Laughter is medicinal, expanded consciousness is medicinal and gardening is medicinal. All of these things are in the realm of that which is cannabis.

If Humboldt County growers can grow bomb weed in sustainable, out-and-proud ways and if they can supply marijuana lovers across the state, let them grow pot. If people can find steady, legitimate work in the marijuana industry, let us have an above-board marijuana market. If Californians can once again demonstrate to the world that we are passionate about our freedoms, that we don’t calibrate our moral compasses by the standards set by the federal government, then let us legalize pot.

This is the United States of America and we, the people, have the power to change laws that the majority of us believe to be unjust. So let’s legalize nationwide, and in the meantime, let’s take care of business in Cali.

Getting through the text of these initiatives is no small task, and I’m not totally clear on how each one proposes to integrate our existing medi-pot system. But I’m providing a brief rundown on each, as best as I can understand what I’ve read.

Ed Rosenthal, the cannabis mega-celebrity, is behind this one. He supposedly sent the initiative off to the Secretary of State on Dec. 19 to get it cleared for circulation. For non-medical gardens, the initiative allows for 2600 watts of light for indoor and 100 square feet of canopy for outdoor. Adults 21 and up are allowed up to three pounds of bud or as much as their personal gardens produce. There is no change to medi-pot grow limits. It protects parents that grow. Commercial producers and retailers would be regulated by the Department of Alcohol and Beverage Control.

Option 2: The Marijuana Control, Legalization and Revenue Act (MCLR) of 2014.

This initiative comes from a group called “Americans for Policy Reform.” According to their website, the text of the initiative comes from “a year-long ‘open source’ effort to include thousands of Californians in the law’s drafting.” MCLR 2014 legalizes the non-medical use of cannabis for adults 21 and over. It legalizes the farming of industrial and nutritional hemp, and it is supposed to repair and strengthen existing medi-pot laws to insure safe access anywhere in the state. It allows for 12 plants (6 flowering) per person/legal residence, with no change to medi-pot grow limits.

This initiative would establish “The Independent Cannabis Control Commission” to regulate marijuana, as opposed to leaving regulation up to the ABC or to the state legislature. I just spoke briefly with Proponent Dave Hodges about this aspect of the initiative, and he says cannabis is “such a dynamic” plant, so a regulatory body that is specifically oriented toward cannabis is in order.

An earlier version of the initiative did qualify to circulate, but Hodges says they are waiting for a more recent, amended version to qualify. The proponents expect to start circulating the initiative for signatures at the start of February.

Option 3: The Control, Regulate and Tax Marijuana Act of 2014.

The Drug Policy Alliance is behind this one. The initiative legalizes one ounce of bud and 1/8th of concentrates for adults over 21, the growth of six plants for medicinal users and four plants for recreational users, and it would have the ABC regulate commercial producers and retailers. It stipulates a 25 percent sales.

The initiative is not yet cleared for circulation.

I covered this one back in October here on LoCO - OTP. Remember the verbose, kooky older hippie, cannabis-will-save-the-world types that I quoted? Yeah, dawggs. This is the Jack Herer Initiative. Free the weed!

Among other things, this initiative legalizes 99 flowering female plants and 12 pounds of flowers per person for personal use and caps the excise tax on commercial sales at 10% of retail price, with no tax on medicinal marijuana. CCHI is already circulating for signatures. The proponents have until Feb. 14th to gather just over half a million signatures to qualify for the 2014 ballot.

Tammy Newcomb, the Northern California Regional Coordinator for the campaign, tells me this in a Dec. 24 email that the recent numbers on signatures for CCHI 2014 are 200,000 confirmed registered voters. She also says that the Humboldt Libertarian Party is supporting the initiative and that they have over 1,000 volunteers gathering signatures with another 300 paid “volunteers” and 3 signature gathering groups workin’ it too.

There’s a lot more to each of initiatives than what I highlighted here. Please, check them out for yourselves.

And here’s hoping at least one of them is up to snuff, because when/if any of these initiatives qualifies for the ballot, it’s gonna be a big deal. Get ready. Happy New Year, LoCOs!