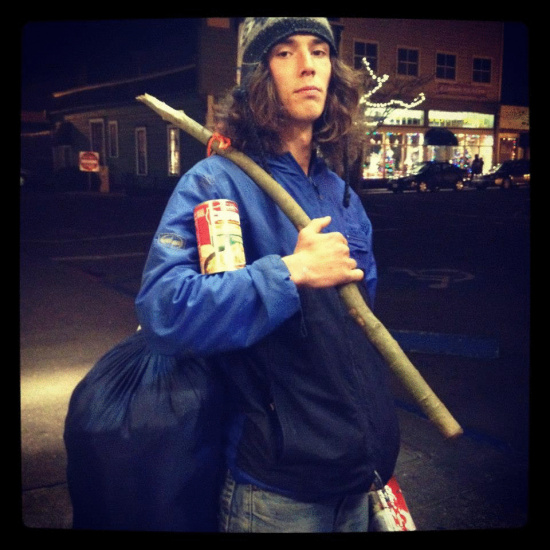 On Friday, February 1st, a man whose Facebook page identifies him as living in Eureka wielded a hatchet (smash, smash, su-mash) to stop a man in Fresno from hurting a woman.  According to witnesses, a man identifying himself as Jesus deliberately drove his car into a black utility worker then began attacking a woman who was trying to help.  The man’s passenger, a hitchhiker who was identified originally only as Kai, whacked the driver with a hatchet. The subsequent interview (see KMPH video above—they also have an extended version) became an internet sensation featured on The Colbert Report as well as many other sites.  In fact, Kai now has several songs and other online tributes dedicated to him.

Though he has no known address, Kai not only identifies himself as having lived in Eureka, he has also posted at least one photo of himself in the area. He prefers the term homefree but, who knows, with his new found celebrity, he might provide a new heroic model and humanize the often vilified image of the homeless in this county.

The full interview of Kai at the scene of the crime: