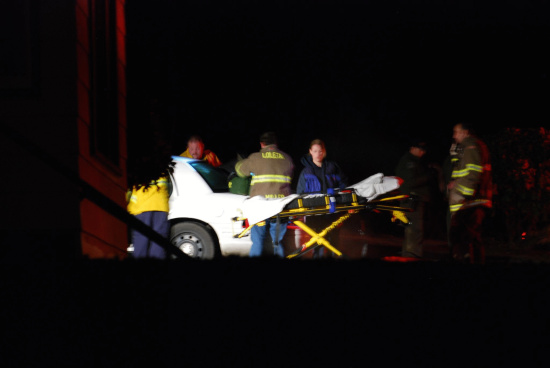 On 01-19-2013, approximately 4:15 a.m., a Humboldt County Sheriff’s Office deputy driving a marked patrol car was southbound on Thompkins Hill road when he saw black 2002 Honda two door hatchback driving erratically and over the double yellow line. The deputy attempted a traffic stop on the Honda, but the vehicle failed to stop. The deputy initiated a pursuit and followed the Honda which turned onto Hookton Road, then south on Eel River Drive reaching speeds up to 65 mph. When the reached Loleta it attempted to turn onto Loleta Drive where it spun out of control causing it to strike the curb. The deputy exited his vehicle to apprehend the occupants. When the deputy exited his patrol vehicle he saw the male driver had a handgun in his hand. The male driver then drove at the deputy who discharged his duty weapon at the vehicle striking it. The Honda ran over the deputy’s foot as it fled the deputy again. The deputy reinitiated a pursuit of the vehicle which was now southbound on Eel River Drive. The Honda lost control at Eel River and Copenhagen Road, Loleta, running off the road. The male driver fled the car still holding the handgun and the female passenger also exited the Honda. They both ran off on foot in separate directions. Additional law enforcement arrived on scene and a perimeter was established. A Eureka Police K-9 arrived to assist with the search of the area. The K-9 located Elliott Michael Walin, 29 years old from Fortuna hiding in a nearby drainage and covered in mud. Walin was wanted on a no bail probation violation warrant and was arrested on that warrant, along with new charges of attempted murder, assault with a deadly weapon, resisting/obstructing an executive officer, evading a police officer and resisting arrest. Prior to be transported to the Humboldt County Correctional Facility Walin was transported to a local hospital where he was treated and released for the dog bite wounds sustained from the K-9. He is being held without bail in the Humboldt County Correctional Facility.

Deputies located Jill Deanna Winnop, 35 years old from Fortuna, hiding in bushes nearby. She was arrested for resisting arrest. She was booked into the Humboldt County Correctional Facility. Her bail set at $10,000.00.

Walin and Winnop were not struck or injured by the deputy’s gunfire, only the vehicle they were driving was hit.

The deputy was transported to a different hospital and was treated and released for an injury to his foot. He is expected to make a full recovery. The deputy has been placed on Administrative Leave which is standard protocol when they have been involved in an on duty use of deadly force. The Humboldt County Critical Incident Response Team (C.I.R.T.) was activated to investigate this shooting. Investigators from the Eureka Police Department, Humboldt County Sheriff’s Office and Humboldt County District Attorneys Office are investigating this incident.

Investigators are still at the scene of the crime searching the fields for the firearm which Walin had and has not been recovered as of yet.

Walin was recently released from California State Prison due to prison realignment (AB109). He was on Parole Revocation Community Supervision and was wanted for violating those terms.

Shots were heard in Loleta this morning near Eel River Dr and Loleta Dr. before 6 A.M. according to neighbors. Though information is not verified yet, apparently sheriff’s deputies were able to track down the alleged perpetrator to the corner of Copenhagen Rd and Eel River Drive near the home of Greg Conners.

According to Conners of Loleta, he woke up this morning at 6 A.M. to find the neighbor’s yard “full of police cars, fire trucks and an ambulance. The neighbor had slept through it, and we slept through it, but apparently there’s a car in the ditch.”

According to Conners, “People in town heard three shots…The sheriffs office traced this guy to our corner where he crashed in the next-door neighbor’s yard. The sheriff chased the perpetrator through our back gate and caught up with him at the bottom….The sheriff’s K9 found the perp at the bottom of the draw and took a bite out of his behind for punctuation… .”

The suspect was put in the sheriff’s vehicle but eventually was taken out and put into an ambulance.

Conners says the suspect is “tall, muscular, no shirt and appeared to be bald or have very short hair…  They think his handgun is buried in the mud in the draw behind our place….Metal detectors are on the way.” 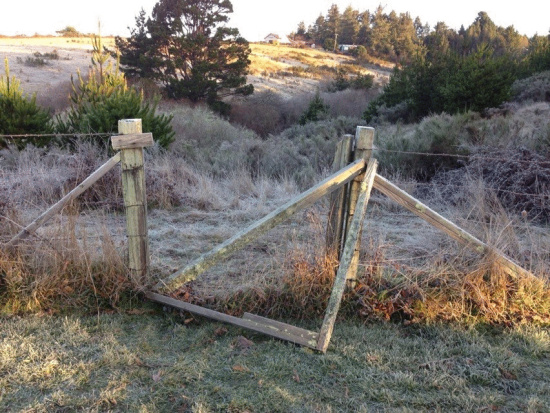