Crabs Before Christmas on the North Coast? Maybe Not 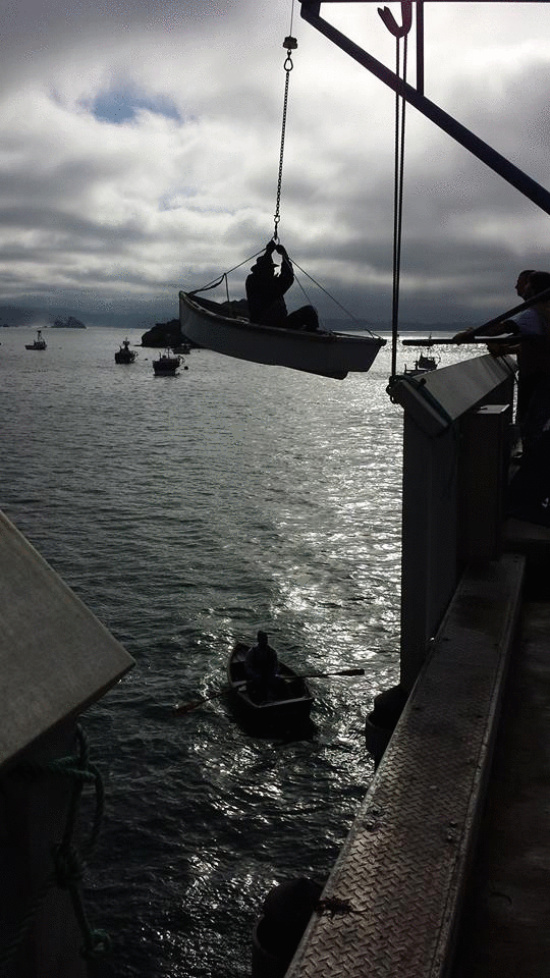 Local crabber, Jim Habib, is raised out of the water today after visiting his boat in Trinidad. (Photo by Mike Parry.)

According to the Department of Fish and Wildlife, starting tonight at midnight, crab pots could legally go in the water and succulent crustaceans could be headed to stores soon after—ready to be sold to customers and fried into cakes or dunked into containers of sweet butter and tangy lemon.

However, that’s not going to happen.

D. Ray Pemberton who has been crabbing since around 1986 and owns the Schultzie Baby out of Eureka explained, “Because of a lack of a price agreement, [we crabbers] are not setting our equipment.” The buyers and the fishermen have a $.50 a pound difference of opinion. The buyers—here on the North Coast, the Pacific Choice corporation controls most of the purchases from commercial crabbers—want to offer $2.50 per pound but crabbers want more.

“Two years ago,” Pemberton said, “we got $3 when we started. Last year, we got $2.50. We lost a lot of money when we started then.” This year, the crabbers are determined to get more. They’re asking $3 per pound.

In fact, in San Francisco, Pemberton said, crab fishermen are getting $3 per pound but, here on the North Coast, they are being offered less. He thinks that is not reasonable.

Talks between the crabbers and the buyers to resolve the price differences are not going well. In fact, according to Pemberton, they’re not going at all right now. “We had a meeting this morning. [The buyers] were supposed to answer the phone, but they didn’t answer the phone… . We were thinking we might meet up on Monday but now we won’t meet up until Wednesday,” he said.

Technically, Pemberton said, the fisherman are not on strike. “We’re tying up. We’re staying tied up… . People could legally go out and fish, but if one person does, then we all have to.” The buyers then would get their lower price.

Pemberton said that the “move to Wednesday may be the fish companies trying to sweat us out” —trying to get some of the fishermen to go out crabbing before there is a price agreement.

Mike Parry, and at one time crabbed for twenty years but hasn’t dropped a commercial pot in the water for the last ten, feels sorry for the local fishermen. He said he knows what it is like to hold off crabbing to get a better price. There was a season one year, he said, when they didn’t reach an agreement on price until February. “I wasn’t able to buy Christmas gifts or Valentine’s gifts that year. There were so many years we weren’t able to buy Christmas gifts.”

Crab from other zones are available now. But, Pemberton said that historically, the other zones “are not nearly as productive as [the North Coast is.] They do not flood the markets… . The bulk of the product comes in from up here.”

The market, he explained, “is strong for our product… .” He thinks that even though Dungeness crab is considered a luxury item, it still sells for a relatively low amount. He quotes a colleague as saying, “We sell a West Coast lobster for the price of hamburger.”

Pemberton believes local people are very supportive of the crabbers. “Yesterday,” he noted with a laugh, “a gentleman says that we shouldn’t be holding out for $3 a pound but holding out for $5 a pound.”

Pemberton said the crab this year are plump and healthy. “The product is wonderful… but, because of the lack of a price agreement, we’re all staying tied up to the dock… . We all hope we’ll get a price that is fair.”

And North Coast consumers can only hope that the disagreement is settled soon so that crabs can be on their plates before Christmas.

(In an earlier edition, Mike Parry’s name was incorrectly spelled.)