« Letter from Istanbul: Halal and Haram

LoCO on the Pot: The 2013 Emerald Triangle Mold Blight 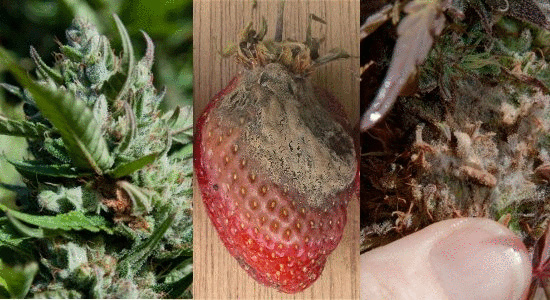 Despite my outsider status — oh yeah, I grew up in Los Angeles, I’ve managed to make the acquaintance of a few growers in Humboldt County. (It’s not hard to do, really.) Hey, I even spent a little time on a pot farm in the last few weeks cutting down plants and participating in the harvest process — living the dream!

So lately, I keep hearing growers drop the “M” word — that’s “M” for MOLD. Dreaded mold! The peril of the pot farmers (well, one peril at least), the woe of the weed people, the plague of Biblical proportions that’s tearing through the Emerald Triangle…

OK, maybe it’s not that bad.

We got some significant rainfall toward the end of September. Indeed, a friendly fellow from the National Weather Service in Eureka tells me there were several days with rain in September — the heaviest rain was on the 29th at 1.38” (over 1” in a day!) and we had rain off-and-on from the 20-25th and the 28-29th. (This info is for Eureka, mind you — the fellow didn’t have Garberville stats handy. It is, at least, a point of reference.)

OTP: I know that with the early rain, mold is an issue — at least that’s my understanding.

CC: Well, no. I put it in a whole different context — mold is always an issue. Well, and here in Southern Humboldt we may have very different conditions than you do on the coast where you’re so chronically foggy anyway… But down here we got several inches of rain — it was on the cool side — some people certainly were affected, but it’s been very low humidity and high temperatures since.

There are spots of mold, I think more than I would expect, but I think the issue isn’t the rain at all. I think the issue is that we have become such an industrial zone for pot production that mold spores in the environment are much more common than they used to be, just like pot is. And I think that’s why we’re seeing more spotting, even in conditions that aren’t very favorable for mold.

OTP: You’re saying the mold is an issue this year but it’s not necessarily because of that early rain?

CC: I think mold will be more of an issue every single year that we grow more and more pot regardless of conditions because conditions this year haven’t been particularly good for mold. And yet there is more mold spotting than I’ve seen in comparable years in the past.

Two years ago when we had just a crappy, soggy, cool damp spring and a crappy, cool damp fall, for the first time in my knowledge, the Agricultural Commissioner of Mendocino County said there were two Botrytis outbreaks, not the usual one, all across Mendocino County. And wine grapes, just like pot plants, are susceptible to that Botrytis mold. And there were two distinct seasons of it. What the Ag Commissioner said was that first outbreak in the spring, which was very unusual, created massive numbers of spores that then went nuts again in the fall.

It may be that we’re still just in the backwash of that explosion of mold, but it just seems like there’s more of it happening all the time. In our part of the county, these have been wonderful conditions for agriculture generally, but not for mold in particular by any means, because, as I say, the humidity has been quite low.

OTP: So the mold is getting worse all the time and it’s not necessarily correlated with the rainfall?

CC: Not in my experience, and this is not even anecdotal. Well, I talk with people and these are just very casual observations but that’s what I see.

OTP: So, it’s like the more weed that’s being grown in the area, there’s more of these mold spores that get introduced and spread around — and that’s why we see more mold?

CC: I think it’s just like Botrytis becomes more common in mono-crop wine valleys — they have to use that horrible sulfur that you smell going up-and-down [Highway] 101 because they’ve created ideal conditions for parasitic intrusions. And as we become more industrial and overgrown in marijuana here in the county I think we’re creating the same kind of conditions, on a lesser scale. And of course, mold isn’t a boll weevil, but it’s the same kind of ecological effect.

OTP: But the rainfall does have something to do with it though, right?

CC: Oh sure, if there’s no moisture at all. But the thing is is that the plants are being watered, so they’re the dampest live objects in our ecosystem — they’re going to be fostering more growth that wants moisture than any plants around them.

OTP: That makes sense. I don’t garden, I’m not very familiar with agriculture and stuff like that — I’m very much a layperson. I know mold is an issue but I don’t know the greater context or history…

CC: Well, just in a few words, up there on the coast where you’re chronically damp, you’re going to be chronically moldy. And here, where we get overnight maritime damp that burns off early in the day when there’s sun, the effects of a rain are much more short-term because within a couple of days, the roads start to get dusty again.

The conditions for mold don’t remain good longer than the 24 or 48 hours. In this time of year when the weather is unsettled and the day after a storm front we may have warm, sunny afternoons. So in conditions like that, a rain won’t foster mold very long.

OTP: When we had that rain, were people chopping their plants down?

CC: You know, some people make a fetish out of growing gigantic plants. Those people, some of them got in trouble because they would have very long stems with ginormous buds on the ends of them and they would catch a lot of water and bend down and even break.

People who, I think more sensibly, grow smaller plants didn’t have any significant problem at all. What some people do is go out into their gardens and shake the branches just to shed the water, but other people say that may actually insert fine droplets of water deeper into the bud and become a source of mold.

It was funny, I definitely knew some people who were running around like crazy and other who were just playing in the rain, loving it and completely unconcerned.

OTP: Interesting. So mold, you’re saying, is an inevitability and with the grape plants, they spray that sulfur. Do people do something comparable with marijuana crops?

CC: You know, people are experimenting with probiotic deterrents to mold and I don’t know very much about them. My own technique just for years has been to let buds finish without water for the last month or so that they grow. So my own plants have very little moisture to give to mold, and I don’t have a big issue with it. But we do, we look out for it very carefully and we do find little spots, which I don’t remember finding to the same extent more than a few years earlier — in these ideal growing conditions.

People’s experiences are very different and people have lots of different techniques — and they all work — for finishing the buds. I do collect a lot of stories from different people and the stories are just all over the map. But I think generally, I’m hearing more about mold and there’s a stem mold now that’s becoming more common. That’s a phenomenon that I just didn’t see that frequently years ago.

OTP: And that’s distinct from the mold with the buds?

CC: Well, it may well be the same mold, but it’s a spot on a branch below a bud instead of in the bud, and it may rot away the bud itself. I don’t know why that seems to be becoming more frequent. But again, I’m no scientist, I’m just sort of noodling on this stuff because it’s interesting.

OTP: Sure. And people when they find mold on their plants, they try to cut it out. Isn’t that how people deal with it?

OTP: In my limited experience being around pot plants that are being processed and harvested, when you cut out the mold, the spores just launch everywhere… That seems like a bad thing.

CC: Well, it depends when you cut it. We do it in the field when it’s still green before it’s harvested at all, and in those conditions it’s relatively damp and relatively shaded. And we just immediately isolate the little moldy sections that we pull out of flowers. So no, in wet trimming there isn’t any explosion of spores or anything like that.

And you’re pulling them out immediately and getting rid of them, I think that reduces and not increases the spread — if you do it green. Now dry, I don’t know, I guess I don’t have much of an opinion on that because we don’t have to do hardly any of that.

OTP: And the mold spores will live for a long time?

CC: Yes, they will. I don’t know how many years, but they’re long-lived. And they just wait for the right conditions.

OTP: I get what you’re saying about more marijuana production leading to this increase in — mold wouldn’t be considered a disease, would it?

In sum — the 2013 Emerald Triangle Mold Blight isn’t necessarily devastating every grower out there and it isn’t necessarily due to the early rainfall. Heightened mold issues in our area may be correlated to increasing industrialization of marijuana production, and mold issues are greater for growers that go for the Foster Farms-esque “chicken with abnormally large breasts” kinda plants — plants that have disproportionately large colas, a.k.a. “donkey dicks.”