Why Do Humboldt Growers Get Such Bad Press? »

LoCO on the Pot: The Grower and the Broker

Not all Humboldt pot farmers are making a shitload of money, even those whose weed winds up in a far-off place. The whole mark-up chain for marijuana, from farmer to end-user, is askew — oftentimes, it is out-of-area distributors who make a killing while local, smaller-scale, outdoor farmers get the shaft.

This week I talked to two business women who speak to this problematic trend for small farmers: Jane Grower — she grows full-sun, organic cannabis in an earth-friendly, boutique manner — and Betty Broker, a middle-wo-man who buys pounds of marijuana grown in Humboldt County to distribute to out-of-state buyers. (Yes, Jane Grower and Betty Broker are aliases.)

Jane Grower does not have a massive grow. She does not destroy the ecosystem and she is not associated with a cartel. Jane believes herself to be representative of similar, community-minded, smaller-scale farmers – “people who give to the community … who give every year to hospice, to the fire department, to the schools…”

Her regular farming expenses (to name a few) include amendments, her time commitment (minimum six months), water and labor. Note that organic farmers have a smaller yield than conventional farmers because there is the potential for more loss. (You won’t find poison-laden hotdogs on her farm.)

Now, there are many marijuana consumers (especially those that have the luxury of being choosy) who believe that full-sun, organically grown cannabis, just like what Jane G. grows, is superior to any indoor on the market, but pricing both on the black market and in dispensaries is upside-down on that point.

Just check out Harborside Health Center’s patient vendor guidelines — they pay $1,500-$2,000 per pound for outdoor and $2,800-$3,400 for indoor. (They do throw in an extra $100 for Clean Green Certified growers, which is about as certified organic as a marijuana farmer can get.) 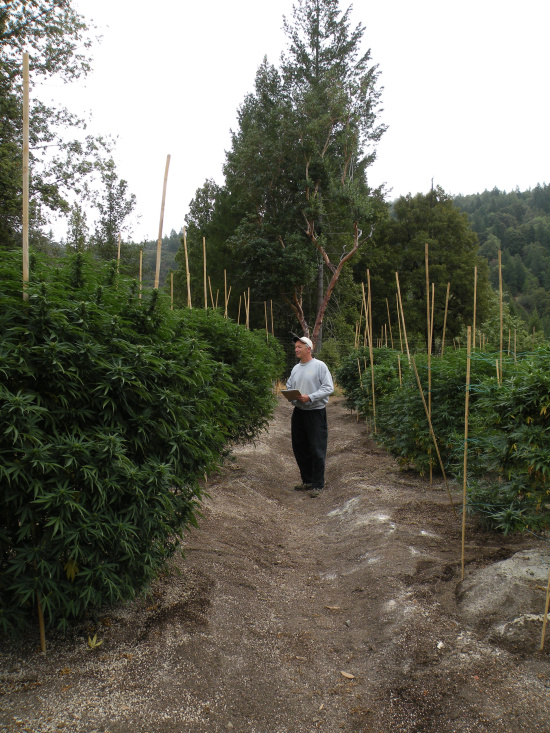 A farm is inspected for its Clean Green Certification. Photo by Jamie Peterson.

Sure, Humboldt outdoor is cheap and abundant because of the high volume of production, but the outdoor that comes out of our region is clearly not all organic or sustainably grown, as our Congressman Jared Huffman wants the country to know — as the country should know.

For that reason, Jane G.’s cannabis should be highly valued for the way she grows it. If she risks schlepping her pounds down to Oakland, she might be able to sell them to Harborside for $2,000 a piece, if she’s lucky. But if she grows, say, 50 sellable pounds this year, will Harborside take them all at that price? Not likely.

This is why, says Jane G., “we’re pushed to use middle men.”

Ms. Betty Broker works with an out-of-state buyer that wants “cheap, high quality” outdoor pounds. (Note: This buyer does not demand organic or lab-tested cannabis.) Betty gets a flat rate of $1,800 per pound; on a work day, she’ll shop around for, say, some outdoor OG Kush. If she finds pounds for $1,500, then Betty Broker makes three “points” ($300) on each pound she buys. If she gets 10 pounds at that price, she can make $3,000 bucks, and that in a matter of a few hours.

In general, she buys pounds of local outdoor for $1,300-$1,700, with the cheapest pound she’s seen at $1,000. She’s on point with Harborside price-wise, but in terms of quantity bought from local farmers … Betty Broker does move a fair amount of weed. Each pound garners $3,000-$4,000 for her her out-of-state buyer, who is somewhere out there watering the marijuana desert of the greater United States with Humboldt bud.

“It sucks to know that [the farmers] could have made more money,” Betty Broker laments, “but everyone’s trying to make money. At the end of the day, if you as a grower don’t have an established outlet and you have to use people like me, then you’re going to get going rates.”

Plus, the farmers don’t exactly demand higher prices, she says, probably because of the Humboldt glut. “It’s not like I ever try and negotiate… I ask what they want, and if it’s too high, I pick something different… [Farmers] are hurting so badly just to make some money.”

(According a quick check of my handy dandy Cannabis Calculator, $2,500 a pound breaks down to $5.58 per gram.) 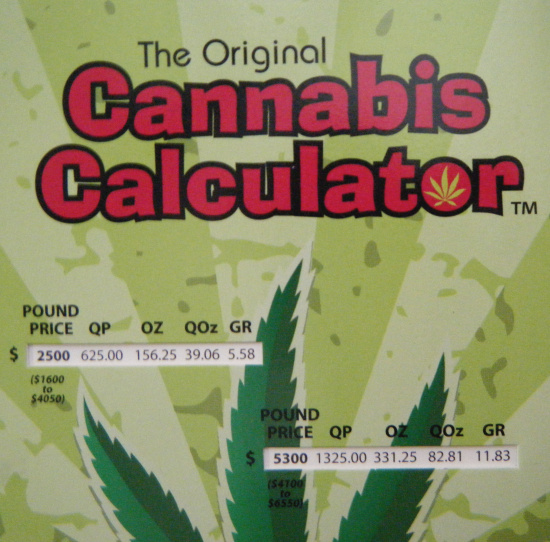 Alas, why don’t people demand more and thereby pay more for organic, sun-grown cannabis? Can’t Joe Schmo at the bottom of the distribution chain in a marijuana-unfriendly region demand that the gram he is purchasing be sun-grown, organic and lab tested for potency and molds? Probably not … but he should!

Jane G. says that some cannabis consumers “don’t even know that they have that choice,” but more people are catching on, thanks to positive weed publicity. Through media, “you get to see snapshots of everybody in this business,” she says, “from the lowest of the low, to the cultivator that is actually doing testing and has a relationship with their patients, that has a relationship with doctors and scientists … that runs a clean, medical-level operation, that subscribes to true, organic ag practices.”

She frustrated with the current system of distribution and mark-up because “if it’s not worth it to the boutique, conscientious, community-minded farmer that’s just trying to make it through the freeking day, that is just trying to make a living, not a killing, then it’s going to go to the factory farmers, and it’s going to go to the cartels … That is who is going to continue to run the show.”

“It’s a buyer’s market, not a sellers market. and it’s been a buyer’s market for quite a while.” She appreciates that brokers provide a service, but in her opinion “they have the least amount of risk and zero investment… and they get to drive the pricing.” Her suggestion to brokers and out-of-area buyers: “Cut us a break, maybe have a relationship with us, and then you get to have an opportunity to make a difference and educate everybody.”

As for looming legalization, Jane G. says “I hope and pray that legalization will allow the boutique medical gardener — the connoisseur of growing cannabis — a niche … very similar to the family wineries, so that Humboldt truly is to cannabis as what Napa is to wine.”

“If this were to go away and it all went to factory farms, then we would have to move on … We would not have this fabulous, wonderful community and this would be a ghost town. It would follow fishing and lumber, and that will be very, very sad for everyone … With that said, let’s work together, let’s keep this beautiful place, and let’s brand this.”

On that note, here’s a media blast for ya: Today, at 2 p.m. on KMUD’s Cannabis Consciousness, guest-host Kevin Jodrey of medical marijuana dispensary Garberville Grass will discuss the following topic with yours truly and Allison Edrington, the former cannabis writer for Eureka’s Times-Standard: “If cannabis expertise and craftsmanship are legendary here in the Emerald Triangle, why does the media often paint a different picture, and what can we do to improve the story?”

For reals. Right now, this region is getting a great deal of national publicity for the negative side of our weed industry. How do we improve the Humboldt marijuana story?

Call in to the show with your ideas, and if you miss it, hit up the KMUD archives.