« Over 100 Fires in the Past Four Weeks in Northwestern California

LoCO on the Pot: Is Humboldt County a High-Intensity Drug Trafficking Area?

To get a HIDTA designation (HIDTA is pronounced “hide-uh,” like “hide a stash”), local officials must prove hat the drug trafficking and money laundering scene within county borders is highly intense. Talk of Humboldt becoming a HIDTA started last year; we are now on the verge of an official designation. Mike Sena, director of the Northern California HIDTA, says we will find out whether or not Humboldt is deemed worthy “this month or in the near future.”

Sixty percent of the U.S. population lives in a designated HIDTA; there are HIDTA blobs all over the nation. The current map sucks to load. This 2011 map from the DEA is better.

Mendo got its HIDTA designation in 2011, and Sheriff Allman was “very pleased” to be welcomed into the club. “We have joined with 10 other counties to share resources and intelligence to continue our focused attention towards meth and other hard drugs in Mendocino County,” he pronounced in this memo. Notice how he puts meth in the spotlight in that statement.

Humboldt officials, in contrast, are using the demonstrable mess of eco-destroyer greed-crazy pot farmers to get into the HIDTA club. The Journal’s 2012 coverage of Humboldt County Sheriff Mike Downey’s efforts to bring in federal help is all about the weed, though there is a statement toward the end of the article from then-Congressman Mike Thompson that is more broad: “Local law enforcement’s resources are strained because of the ongoing fight against the rampant expansion of methamphetamine, heroin and marijuana trafficking…”

Current Congressman Jared Huffman also spoke of his desire for a Humboldt HIDTA designation on his visit last month. 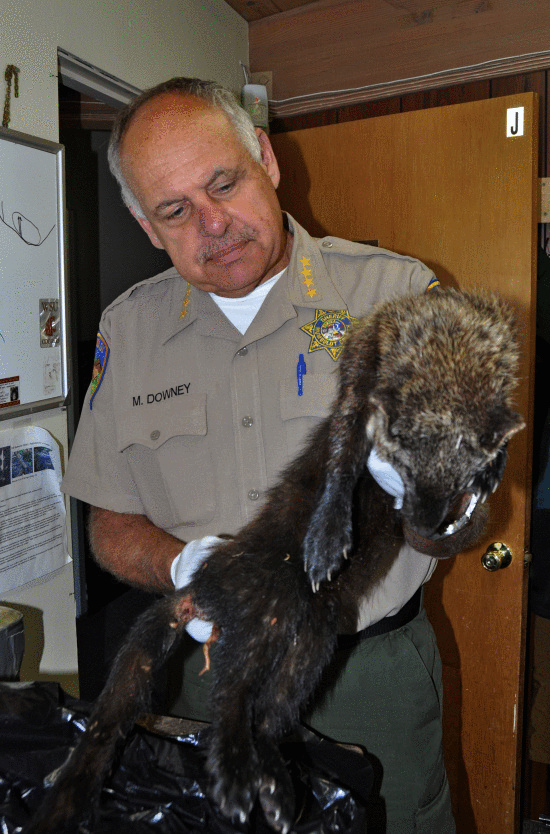 What kind of helpful stuff will Humboldt get with a HIDTA designation, anyway? Acronym bragging rights? More foot soldiers? Cash $$ for our local law enforcement? After all, there are some business owners in SoHum that want to see a stronger police presence (see “Is Garberville Going to Hell?“, from the Anderson Valley Advertiser). This is a nonstarter — the County can’t kick the Sheriff’s Office money for that right now. Will a HIDTA designation help?

Well, not with money. NorCal HIDTA man Mike Sena says that in the case of Humboldt County, there’s “no additional funding available,” at least not right now. The more immediate benefit to Humboldt law enforcement will be “more resources in the form of analytical support, investigative equipment support… information sharing coordination and collaboration.” This is what the HIDTA deal is all about.

Mendocino County got its HIDTA designation in 2011, and Greg Van Patten, the Sheriff’s Public Information Officer and Field Service Division Captain, says that, so far, Mendo’s HIDTA-designation has been a positive thing overall because now county law enforcement agencies qualify for more grants and funding programs.

For example, it helped Mendocino County score money through the California Multi-Jurisdictional Methamphetamine Enforcement Team for an additional staff position on their anti-drug task force.

Van Patten says HIDTA classification is “a really good bargaining chip” and that the HITDA designation is opening networking doors for the Sheriff’s Office. They are privy to more “informational briefings” from local, state and federal agencies.

When I express my perhaps naive surprise that government agencies don’t already freely share their intelligently collected and analyzed data sets, Van Patten says: “You would be surprised. There’s a lot of information out there, and certain types of information does need to be more confidential than others.” The myriad niche governmental agencies don’t necessarily swap info; the NSA-DEA surveillance data stream is not for all to drink from. The HIDTA designation helps lubricate communication channels.

Once in the HIDTA club, Humboldt County law enforcement will get in on this exclusive information sharing and analytical support — “tactical and strategic information to help officers make good choices,” Sena says. He adds that such information will better enable our law enforcement to better discern “medicinal marijuana grow sites from those locations that are being operated by organized crime groups or by individuals that are just out for profit.”

Everyday citizens might not notice a much of a difference when/if Humboldt’s HIDTA designation comes through, what with the current lack of funding. But the point will be made that Humboldt County officially has a scourge of giant, toxic, thirsty grows, of heroin, methamphetamine and bath salts use, and therefore Humboldt deserves membership in the funding and intelligence-sharing club with its highly intense acronym.

Is Trinity County next? And hey, what was up with that highly intense raid in the Pines just over a week ago, anyway?