« 58 Structures Now Threatened as Lodge Fire Expands, Maps and Photos of the Area

UPDATE, 8/11: The names of the victims have been released.

On the evening of Sunday, August 10th, a single vehicle collided head-on into a tree on State Route 36, east of Hydesville, resulting in multiple fatalities and major injuries.

At approximately 4:30 pm, a 2002 Dodge Dakota pickup truck was traveling westbound on State Route 36, just east of Fisher Road, when it veered to the right off the roadway edge and collided head-on into a tree.  Four of the vehicle’s eight occupants including the driver, one male and three females, were pronounced deceased at the scene.  The remaining four occupants were transported to Redwood Memorial Hospital with major injuries.  The male driver was wearing a seatbelt at the time of the collision and seatbelt usage among the remaining occupants is still under investigation.  Several of the occupants were in the rear of the pickup truck when it collided into the tree.  Two dogs were rescued from the vehicle, one having sustained major injuries.  The occupants’ names are being withheld pending family notification.

This collision is the deadliest traffic collision investigated by the CHP in Humboldt County in nearly 12 years.

UPDATE 9:33 p.m.: Two dogs were at the accident—one wounded. Animal control officers picked them up according to an eyewitness, Josh Wallan-smith 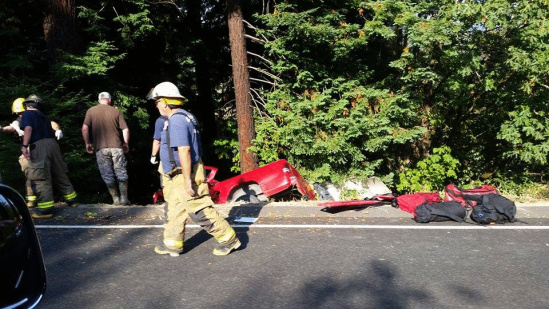 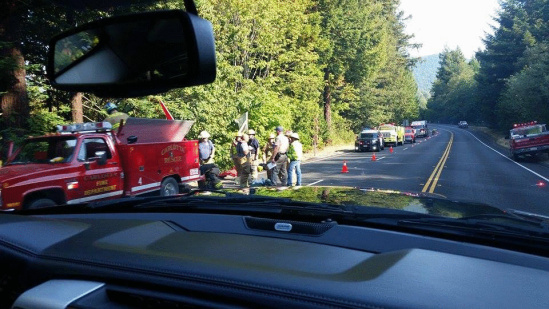 UPDATE, 5:17: At least four of the victims appear to have been passengers in the back of a pickup truck.

UPDATE, 5:02 p.m.: Air transport being requested for one victim.

Original post: Breaking news: Reports are coming in of a traffic accident with major injuries by Hydesville near the cross of Hwy 36 and Fisher Road. According to the scanner, there are seven patients needing ambulances, six patients with major injuries. Three patients are still in the vehicle. It is unknown yet if extrication is needed.

There is single vehicle over the side of the road. Please be careful and watch for emergency vehicles and traffic control if you are in the area.