Home Invasion Suspect Turns Himself In to Arcata Police »

The conference call wrapped up a few minutes ago, and it contained a few additional tidbits worth mentioning.

The Bureau of Reclamation was careful to pitch the decision to release water not as an alteration of their July 30 decision to stop preventative releases, but rather as a logical continuation of it. Back then, the bureau said it would release more Trinity water if this year’s salmon run became imperiled, and conditions on the river since the end of last month have convinced it that such is the case.

“What we said all along is that we would monitor the river, and what we determined is that conditions in the river have changed,” Bureau of Reclamation regional director David Murillo said.

Murillo said that conditions on the Klamath right now are very similar to those during the 2002 Klamath Fish Kill. Flows are low, quality is poor, and fish have been coming up earlier than normal, crowding the river’s cool spots. The water coming from behind Iron Gate Dam on the Klamath main stem is unclean and nutrient-laden. Blue-green algae has been spotted in the Trinity.

Where will the water come from, if, as the bureau has said before, the system is currently so dry? The bureau’s Rob Milligan said that there will be no reduction in the amount that is being sent to the Sacramento Valley. Rather, the water would be coming out of the bank. The bureau estimated that it’ll go into next year with about 25,000 acre-feet less behind Lewiston Dam than it would have, otherwise. That raises concerns about another year of drought.

“We’ll have to see where we stand a year from now,” Milligan said. “There certainly is a need today.”

Agricultural interests have jealously guarded their stake in that water in the past; does Reclamation expect a legal challenge to today’s decision? One staff member acknowledged that such was certainly a possibility, but that the bureau is careful to follow clearly designed processess and base their decision on scientific facts on the ground, in order to avert such challenges.

Another bureau scientist said that an estimated 92,800 chinook salmon will swim up the Klamath this year, but he added that the estimate may possibly be too low, given the higher-than-expected numbers they’ve seen so far on the Columbia River. He had no estimate for coho or steelhead.

The gates open Saturday morning at 7 a.m., and the cool Trinity water is expected to reach the mouth of the Klamath on Monday.

From the Office of Congressman Jared Huffman:

WASHINGTON­—Congressman Jared Huffman (D-San Rafael) released the following statement after the U.S. Bureau of Reclamation announced that it will release water to protect Trinity River salmon:

“I applaud the Bureau’s decision to finally release water to salmon struggling in the Klamath and Trinity rivers. While it is abundantly clear that the Bureau’s water management plans have been consistently shortsighted and that the irresponsible excessive diversion of water to the Sacramento River forced us into this difficult situation, the decision announced today indicates that the Bureau at least kept listening to the growing evidence of a looming disaster for salmon and is now doing the right thing.

“I appreciate the Bureau’s and the U.S. Interior Secretary’s willingness to listen to the Yurok, Hoopa and Karuk tribes and to demands from my office, and to change course from their original decision which would have needlessly imperiled vital salmon stocks in one of the driest years on record. I especially appreciate the tribes’ tenacity in demanding protection for these important public resources, and to the other deeply committed stakeholders who have spoken up on this issue.

“There is still a lot of work to do to get the Bureau on track to making responsible long-term plans for using one of our critical resources in a way that protects salmon and the people that depend on them while appropriately balancing the need for food production. I will apply consistent pressure on the agency to move in that direction, and I will stand with federal agencies when they do the right thing – because we know that litigious and powerful San Joaquin Valley interests will at every turn file legal challenges against salmon protection as they seek to divert more of our north coast water.”

In July, Huffman sent a letter calling on the Bureau to immediately address the increasingly hazardous conditions for salmon and steelhead trout in the Klamath and Trinity River watersheds during this drought year. Huffman reiterated the urgency of the appeal in August.

From the Yurok Tribe:

“We are happy that the BOR’s decision came out in favor of fish,” said Thomas P. O’Rourke Sr., Chairman of the Yurok Tribe. “They did the right thing.”

The Yurok Tribe submitted two formal requests for additional flows on the Klamath River, which is suffering through three years of extreme drought.

Water coming! Here’s the press release from the BOR:

The Bureau of Reclamation will release additional water from Trinity Reservoir to supplement flows in the lower Klamath River to help protect the returning run of adult Chinook salmon. The public is urged to take all necessary precautions on or near the river while flows are high during this period.

“We have determined that unprecedented conditions over the past few weeks in the lower Klamath River require us to take emergency measures to help reduce the potential for a large-scale fish die-off,” said Mid-Pacific Regional Director David Murillo. “This decision was made based on science and after consultation with Tribes, water and power users, federal and state fish regulatory agencies, and others.”

“We fully recognize that during this prolonged severe drought, every acre-foot of water is extremely valuable, and we are making every effort to conserve water released for fish health purposes to reduce hardships wherever possible,” added Murillo.

Reclamation will continue to work with NOAA Fisheries and other federal agencies to comply with applicable provisions of the Endangered Species Act and the National Environmental Policy Act. 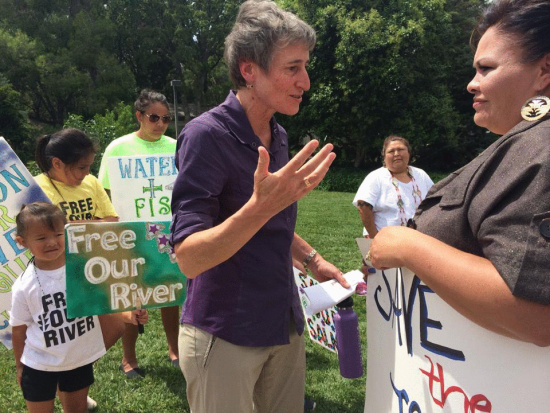 The Bureau of Reclamation has organized a conference call at 10:30 this morning to announce a revision to the much-reviled decision, earlier this month, to skip the annual release of Trinity River water that has been employed, in the past, at this time of year, to prevent mass fish die-offs on the Klamath.

We have no word yet as to the details of the revised water schedule — whether it will include a preventative release schedule, whether the amount released will be enough to prevent a disease outbreak among this year’s salmon run — but at this writing it’s looking like at least a partial victory for the immense uprising of protesters and activists, led by local tribes, that stormed Sacramento and elsewhere after the Bureau of Reclamation’s initial July 30 decision to curtail all preventative water release on the Trinity this year.

Your Lost Coast Outpost will be on the conference call, and will update this post with information as it comes in. Again: should start shortly after 10:30.