What’s the Story With That Place? Big Lagoon’s Ghost Town

Google Street View shows how a neighborhood used to look.

For this, the second installment of our series “What’s the Story With That Place” (see the first one here), we’ll have to start by addressing an inevitable component of geographical exploration: trespassing. It’s against the law and you shouldn’t do it. The Outpost does not encourage lawbreaking of any kind. However! The Outpost does acknowledge that lawbreaking sometimes makes for good stories. We think this is one.

A guy whose name is not Steve Adams but who we’re calling Steve Adams enjoys exploring Humboldt’s remote regions — “to see what I can find,” he explained in an email.

In 2011 his wandering spirit led him on a car ride to Big Lagoon. From Hwy. 101 he hung a right onto an unmarked side road, and less than half a mile later he came across what looked like a typical, if misplaced, American cul-de-sac. There were street lights, the yards were well kept, and DirecTV dishes were mounted to the somewhat run-down houses. Out on the road a sign read, “Caution: Children Playing.” There was even a playground with a tennis court and basketball hoops.

It seemed an odd spot for a suburban-style neighborhood — 10 houses tucked away in a forest, several miles from any stores or services. When Adams climbed out of his vehicle, things seemed even stranger.

“I noticed [that] every one of the 10 houses was completely abandoned,” he said. One house had personal belongings out front — furniture and kids’ toys. “It was like a ghost town,” Adams said. “It looked as though kids could’ve been playing there that morning, then suddenly everyone vanished.”

The doors were ajar on a couple of the houses, and Adams boldly walked in. There still wasn’t a person in sight. He didn’t have his camera, but he returned a couple weeks later to snap some photos.

“My second visit, things looked VERY different,” Adams said. For one thing, a gate blocked the entrance to the street. 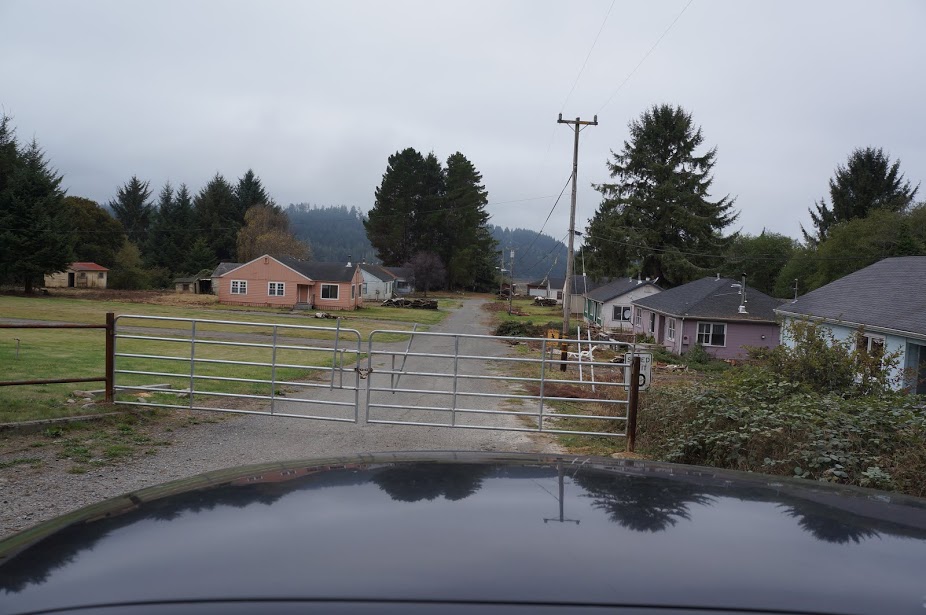 Other things were different, too. Trees that stood in front yards just two weeks earlier now lay severed on the ground. Debris piles were strewn about. Work trucks were parked in a couple of the driveways. In one yard, a trash can was flanked by detritus including three yellow, plastic delivery boxes for the Times-Standard and a length of gutter downspout.

One thing was the same, though: There was still nobody in sight. Adams wandered around again, snapping pictures this time. 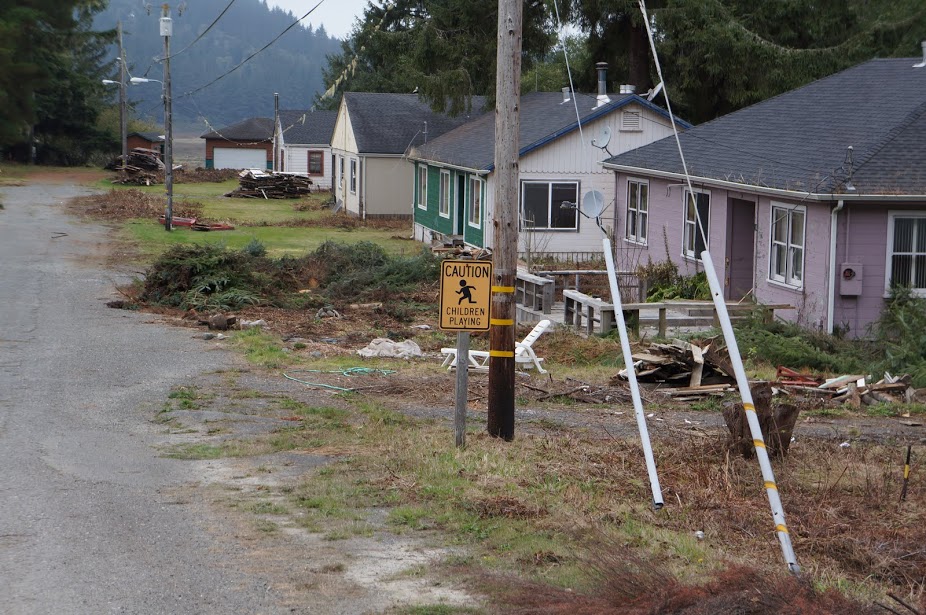 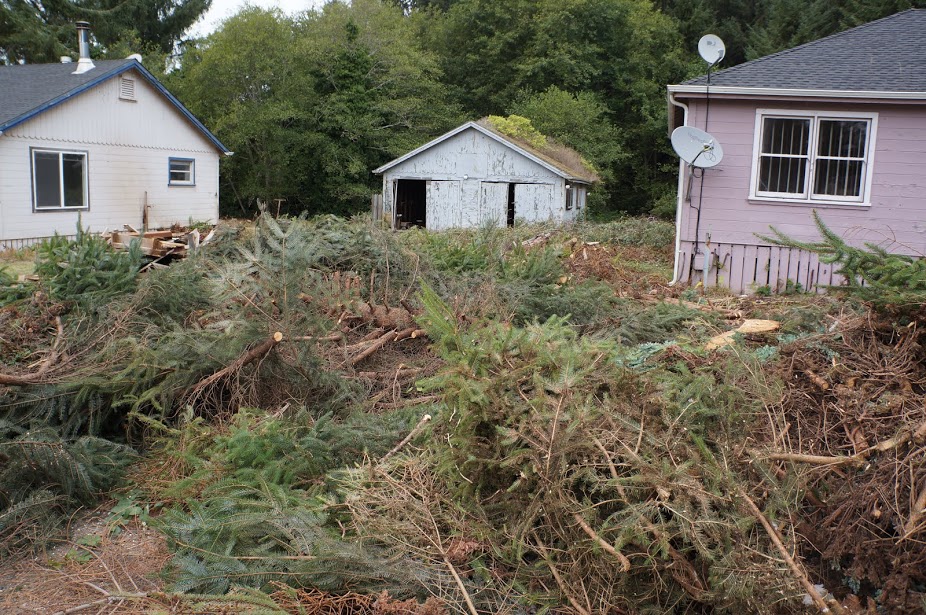 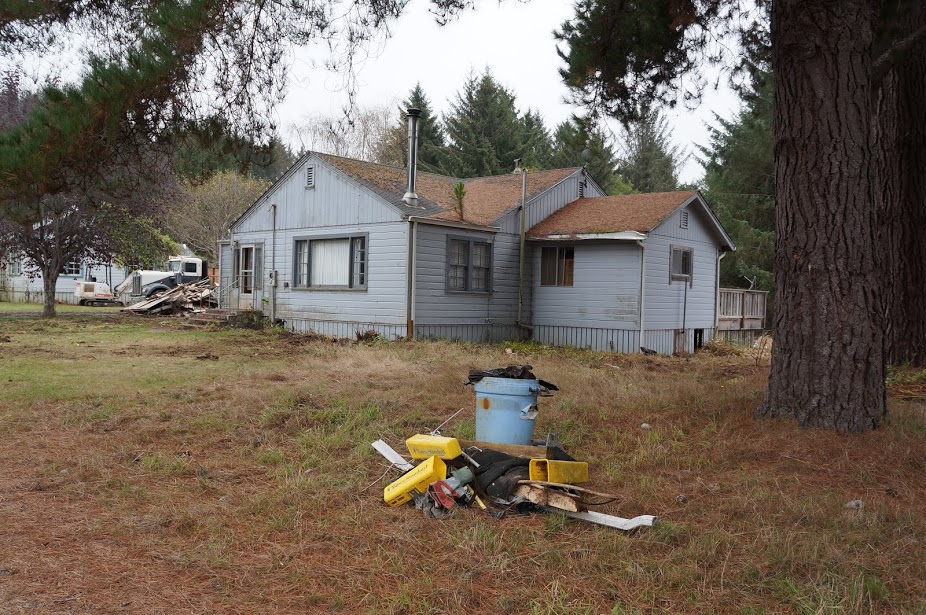 To this day Adams remains curious about the place.

“I’ve tried looking up this property but cannot even find parcel numbers for these homes in public records,” Adams said in his email.

One clue: A sign posted by the entrance to the neighborhood read,

“Could this have been a neighborhood that housed loggers at one point?” Adams wondered. “Was this an illegal subdivision that Green Diamond was suddenly busted for?”

He looked the place up on Google maps and found that when you click “Street View” it takes you to a version of this little cul-de-sac from the past, when the homes were occupied. Cars and trucks are parked out front. Lawns are mowed. In one driveway, a pair of Weber barbecues look ready for briquettes. 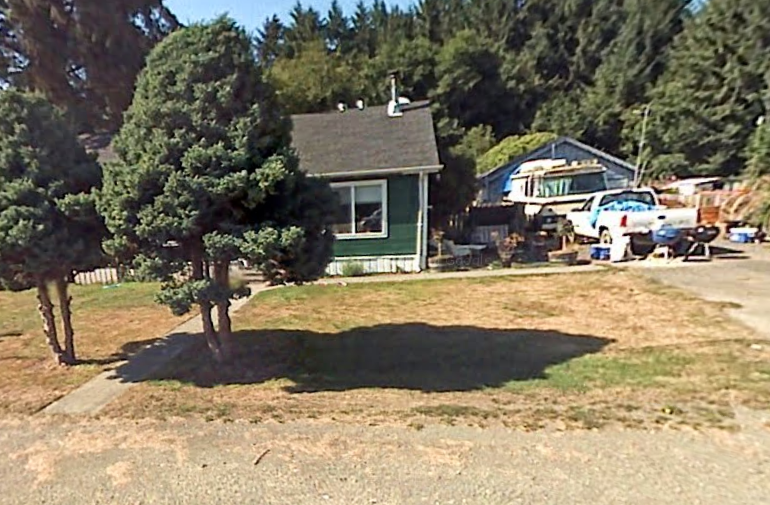 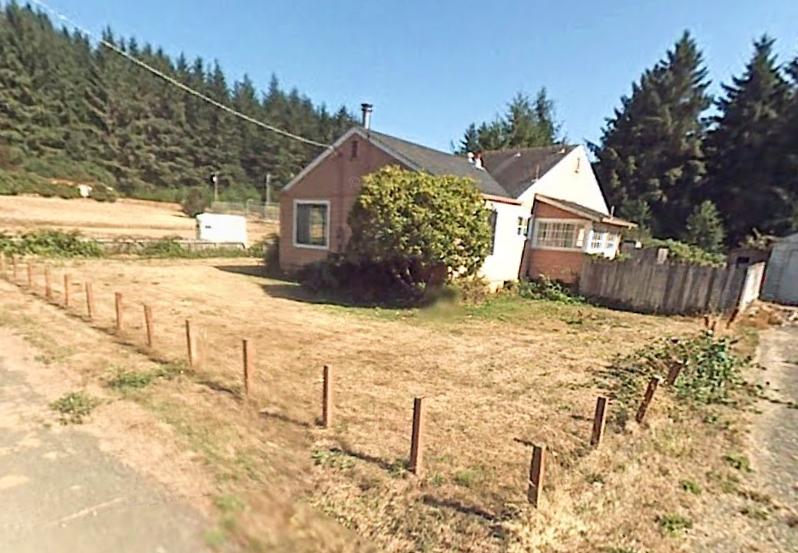 Click here to have a look around for yourself. If you check the upper-lefthand corner you’ll see that the images are from Aug. 2007. That was the year that Google launched Street View. (Humboldt County was one of the first rural locations captured in the company’s ambitious endeavor.) Since those images were captured, Google’s poly-lensed eye has been all over the globe, taking camel rides across the deserts of Abu Dhabi, hikes on the islands of Antarctica, even a scuba dive to the wreckage of a Civil War steamer that sunk off the coast of Bermuda. But it’s never been back to Big Lagoon’s ghost town.

“Today, a new locked gate sits at the end of the road where you would turn off highway 101 to get to this ‘neighborhood,’” Adams said. “But you can still see from the highway that at least a couple of the houses are still standing.”

So what’s the story with this place? Adams was correct when he guessed this neighborhood once housed loggers. The original homes on the property were built in the 1940s as company housing for employees of the Hammond Lumber Company. Humboldt State University has a picture of the “single men’s cabins” at the Big Lagoon Lumber Camp from sometime pre-1956, which you can see here.

You can also see the lumber camp’s workshops as they looked around the same period here. And this how they look today, from above: 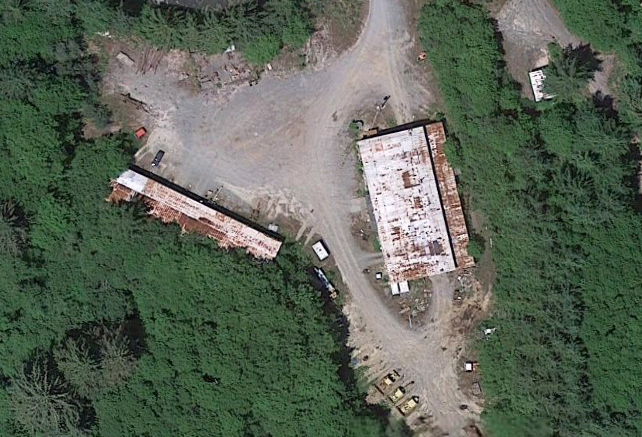 Hammond’s Big Lagoon site, like most other operations of the era, was serviced by rail lines until 1945, when a large forest fire destroyed most of Hammond Lumber Company’s railroad trestles “and brought timber harvesting to a standstill on a large portion of its holdings.” [Source.] The fire devastated the company’s operations in Crannell (near present-day Westhaven), which had been a far more productive venture than the Big Lagoon camp.

But in 1947 Hammond shifted its focus from Crannell to Big Lagoon, where lumber from a newly constructed salvage mill was exported via trucks to Crannell and then transferred to company-owned rail lines for shipment to Hammond’s main plant in Samoa. By 1954 the Big Lagoon camp employed more than 200 men and was producing 70 million board feet, or $30 million-worth (about $265 million-worth in today’s dollars), of mostly redwood lumber per year.

Georgia-Pacific acquired Hammond Lumber Company in 1956, and when U.S. courts ordered a monopoly break-up of the company in 1973 the holdings went to the newly created Louisiana Pacific Company.

Coincidentally, that’s the same year that retired local forester Craig Newman began his 20-year career, and he remembers the Big Lagoon Lumber Camp, which at the time included a cookhouse, a row of single-wide trailer spaces (mostly occupied) and “a pretty grand” mill manager’s house overlooking Big Lagoon. Back then, the industry was booming.

“In Big Lagoon, in the early ‘70s, we were logging 250 million board feet of virgin old growth redwood every year,” Newman said. “And that was just our company.”

Simpson Timber Company (now known as Green Diamond Resource Co.) purchased Louisiana-Pacific in 1998, acquiring the Big Lagoon Camp and salvage mill along with everything else. But by then the timber industry was in decline, and the following year Simpson shut down the Big Lagoon mill due to a lack of logs.

A handful of folks kept living on the property, in the little houses that line the cul-de-sac. “It was kind of a mixed bag — some retired [people], some current [Simpson] employees,” said Craig Compton, Green Diamond’s land management and business development manager. “We made a decision to close the facility in July 2011,” he added.

By then there were only three or four homes occupied, plus “one or two folks in the mobile home stations,” Compton said. And the facilities were deteriorating; the water and wastewater systems needed to be replaced. “Being landlords we had to evaluate whether we could upgrade and provide sufficient services,” Compton said. Ultimately the expense was deemed “not economic,” and the last residents were evicted

Steve Adams’ discovery of the place must have been mere days or weeks after the evictions. It looked like the neighborhood’s residents had just vanished because they had. And when he returned a couple weeks later, the company had locked the gate and begun dismantling the place. But not entirely.

“Since closing in 2011 we have in essence just boarded up the houses,” Compton said. “We don’t have any plans immediately for what to do with them.”

Green Diamond’s Gary Rynearson, who was quite helpful with this story, said in an email last week, “I would appreciate you adding that we do not condone trespassing and actively patrol for and cite trespassers.” You’ve been warned.

Like all ghost towns, the one in Big Lagoon represents a reservoir of prosperity that has since dried up. And with this week’s news of a looming shut-down at the Korbel Mill (owned by the Green Diamond subsidiary California Redwood Company), Humboldt County moves another step further from its timber industry heyday.