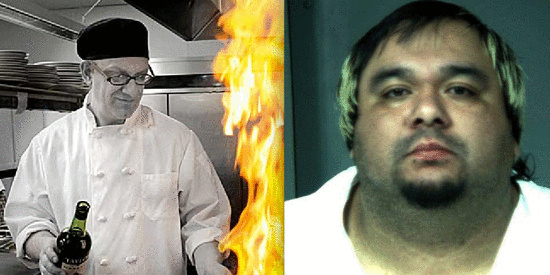 The victim, Douglas Anderson-Jordet, on the left. Juan Ferrer, the defendant who pled guilty to manslaughter in Anderson-Jordet’s death, on the right.

The defendants in last November’s fatal stabbing of Douglas Anderson-Jordet on the streets of Arcata were charged with a variety of offenses, the most serious of which was involuntary manslaughter.

The prosecuting attorney, Elan Firpo, detailed her reasons for this decision on her candidate for DA Facebook page. She lays out her thinking point by point stating that the evidence would show that the victim was “inflamed in his demeanor” and that a witness heard him “yelling, homophobic, sexist, hateful statements at the defendants.”

A friend of the victim sent the following letter to the editor contesting this characterization of Anderson-Jordet.

Letter to the Editor from Ben Dale:

There are only three people left alive who know what happened to Douglas Anderson-Jordet on the night of November 25th, 2013. Their names are Juan Ferrer, Nicholas Stoiber, and Sophie Rocheleau. If Douglas hadn’t been violently assaulted and murdered by them that night, he’d be alive to defend himself and give his side of the story.

Human nature dictates that Nick, Sophie, and Juan would say anything they can at this juncture to vindicate themselves and denigrate Doug. However, when it came to my attention that they’ve resorted to defaming his character by claiming he instigated that night’s altercation with homophobic and racist attacks towards a female (Ms. Rocheleau), I became overwhelmed with the need to speak for him, since he is dead now, and can no longer speak for himself.

I knew Doug very well for nearly 10 years. He was my closest friend. Doug moved to Arcata to live somewhere more progressive than his lifelong home in central Minnesota. He was in no way the bigoted, cruel or angry drunk that his killers have painted him to be. Doug was a quiet, 50-year-old man who had been through a lot in his life. He was probably not so different from his killers in that he was a devoted animal advocate and passionate about music. In the 10 years I had the pleasure of knowing him, Doug gave absolutely no indication of violent tendencies, even when provoked.

I do not believe Sophie, Nick, and Juan truly wished to kill Douglas Anderson-Jordet the night of November 25th. It’s very difficult for me to write that, as my anger towards them has not yet blossomed into forgiveness. They certainly did Doug no favor by beating, stabbing him and leaving him to bleed to death in the street. And although they most likely did not ‘intend’ to kill Doug, they did. We should be questioning whether they should now be allowed to drag his name through the mud, persuading people to feel that perhaps he deserved it. He did not deserve to die, and I do not believe they deserve to freely walk our streets so soon after committing such a brutal offense.

It must also be noted how disappointed I am in the handling of this case by the DA, Elan Firpo. I attempted to contact her in January to give insight into Doug’s good character; she never returned my call. As a result, Doug’s integrity has been greatly compromised. The wellness of our community depends on better representation for victims of violent crime.