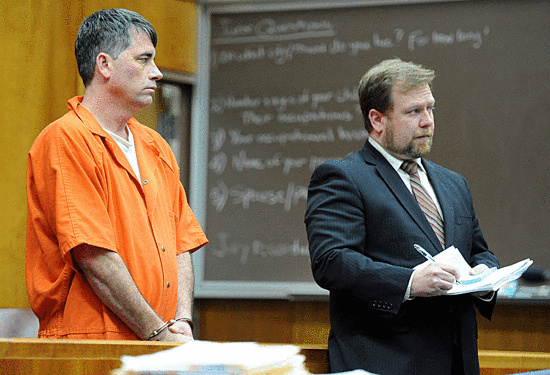 (Above: Gary Lee Bullock and his attorney, Kaleb Cockrum, on Jan. 6. Photo by Mark McKenna.)

Bullock has also been charged with vehicle theft and arson, with special allegations that the murder involved torture and was committed during the course of first-degree residential burglary.

Aubuchon said he and two fellow officers arrived at 615 H Street in Eureka shortly after 9 a.m. on Jan. 1. There they met church Deacon Frank Weber, who directed them inside. He noticed a strong smell of gas — strong enough that he was “concerned about breathing,” he said.

The deacon directed the officers upstairs, where they found Dr. George Zibilich standing in the doorway of a den, Auchubon testified.

“He said something like, ‘He’s dead,’” Auchubon recalled. “His voice was fluctuating; he was almost crying, and his arms were about waist high, [with] his palms up.”

Auchubon said he saw Freed’s body lying face-up in the middle of the floor, lifeless, with “blood strewn about the face.”

Concerned that someone may still be in the building, Auchubon said, he searched the top floor of the rectory, worrying all the while about potentially discharging his firearm in the gas-filled space, he said. He added that the inside of the rectory appeared to have been “ransacked.” A fellow officer found a cigar “smoldering” near the burners of a gas stove downstairs and turned it off, Auchubon testified.

Under cross-examination by Kaleb Cockrum from Humboldt County’s Alternate Conflict Counsel office, Auchubon described a few more details of the scene, including his recollection that Dr. Zibilich’s upturned hands had blood on them.

The next witness was 21-year veteran Eureka Police Detective Todd Wilcox, whose testimony included descriptions of several crime scene photos. Willcox also used a black felt marker to sketch the upstairs of the rectory onto a large, white paper pad, which was propped upright next to the witness stand.

Wilcox said the EPD dispatcher called him at home at 10:12 a.m. on New Year’s Day and told him someone had been killed at St. Bernard’s. Charged with processing the scene, Wilcox said he found the rectory in disarray. There was a strong smell of alcohol inside the den, and Father Freed’s body had been wrapped in sheets and blankets, which were wet and smelled of liquor, Wilcox testified. He added that there were “flaky, dark red-brown flakes” that resembled rust on the door, the baseboard moulding and carpet, plus what looked like blood stains next to the body.

Other elements of the scene, as described by Wilcox:

Under cross-examination, Wilcox repeated many of the details of his testimony and described various other elements of the scene, including various stores of alcohol. For example, a trash can in the den contained several empty Sapporo beer cans, a mini-fridge in the storage room was almost full of beer cans (“Tecate, I believe”), and more beer cans were in a refrigerator in the den, Wilcox said. It was unclear why Cockrum pursued these details.

The preliminary hearing is set to continue tomorrow morning. If convicted, Bullock could face the death penalty.