« LoCO On The Pot: Media on the Weed! 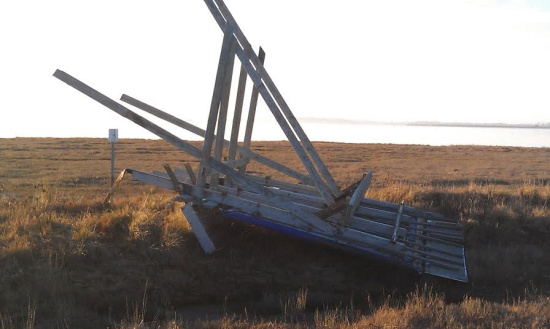 Another one down. The third plank to be felled this month — located near the Bayside Cutoff between Arcata and Eureka — features an ad for Northcoast Horticulture Supply. Jen Kalt of Humboldt Baykeeper got a call yesterday informing her that it was down. She snapped the above picture and tells the LoCO that, like the Bailey Mortgage sign cut down a couple weeks back, this one is believed to be on Caltrans property.

Update: It appears that, back in 2011, Caltrans revoked the permit for this billboard, along with the one for the felled Bailey Mortgage billboard. Here‘s a letter from the state agency to billboards owner CBS Outdoors telling them that permits have been nixed because the property owner hasn’t given written consent for them to be there.

Obviously, this raises some questions, like, for example, who is the property owner? Remarkably — and sorta confusingly — that’s still a matter of some dispute. Back when the letter was written, the billboards were thought to be on land owned by the U.S. Fish and Wildlife Service, but that agency later denied ownership. Last year, the City of Arcata and the Humboldt Bay Harbor, Recreation and Conservation District did a title search in hopes of figuring it out. This is as definitive as Harbor Commissioner Mike Wilson would be on the matter: “The best information available to the District indicates that [the sign] is on Caltrans land.”

Which leads to another question: Why, if the permits were indeed revoked, were the signs allowed to remain upright (until vandals struck)? This being a holiday and all, Caltrans is not available for comment. We’ll give a call during normal business hours and get back to you, dear LoCO readers.