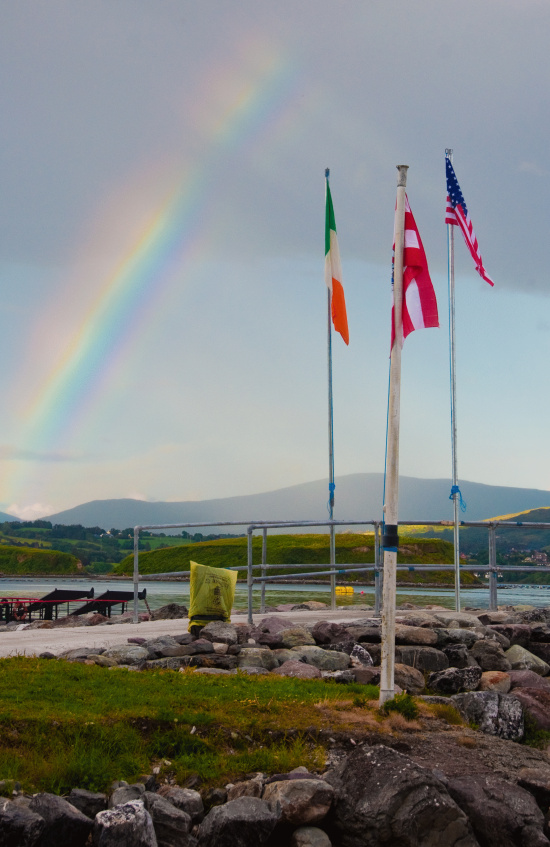 As the American, Irish and Cork flags fly, a rainbow arcs near Whiddy Island in the southwest of Ireland over the unveiled memorial to an American serviceman killed in World War I.

On Saturday, June 28, two American servicemen were honored as part of a WWI commemoration ceremony on Whiddy Island in Ireland. One of the men, Neil Emerson Kemp, Sr., lived a large part of his life in Humboldt County, died here in 1967 and was buried in Eureka. 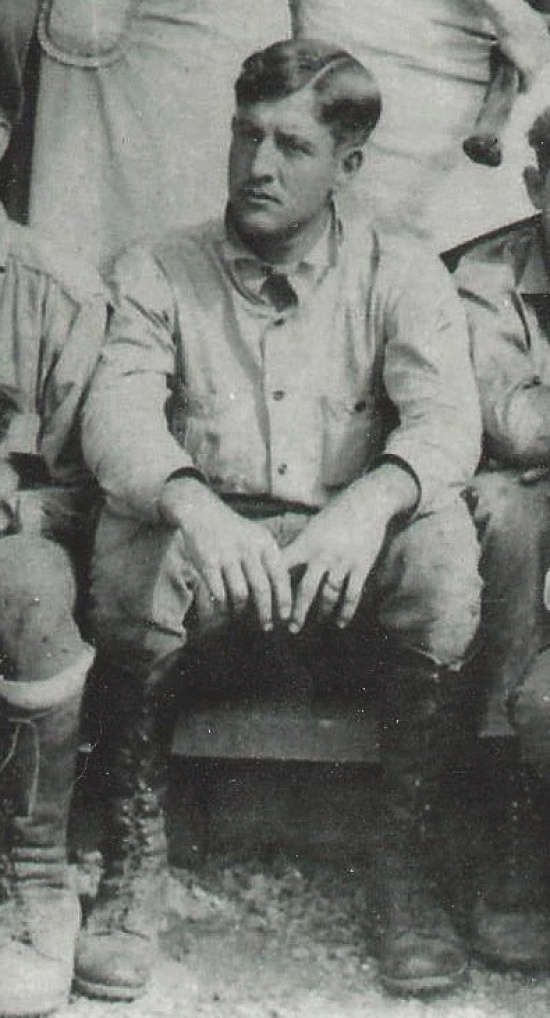 Neil Kemp, Sr. taken in the 1920’s when he was part of a survey party building Hwy 101 here in Humboldt. The photo was taken near the mouth of Salmon Creek across from Miranda.

The American base on Whiddy Island in Bantry Bay was opened in 1918. Germany was attempting to blockade what was then Great Britain by using submarines (U-boats)  to destroy any vessels (including passenger ships) going in and out of those coastal waters. Earlier in the war, not far from the base, the Lusitania was sunk by a German U-boat and over 1000 passengers and crew lost their lives include 128 Americans. 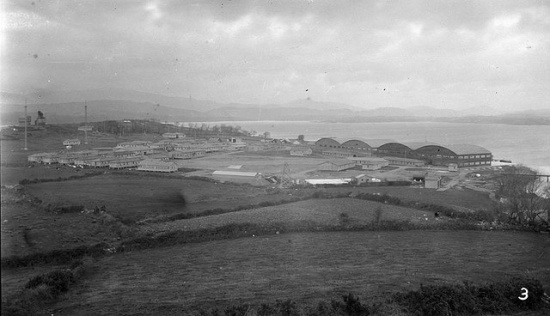 Photo of the American base on Whiddy Island taken in 1918 [From the Ralph Gifford collection. See more photos here.]

The United States entered the war as a response to Germany sinking American vessels. The Americans built the Whiddy Island base for seaplanes which were used to fight the German submarine fleet. These “flying boats” needed to land in the water and so they were housed in giant hangars on the island close to the bay. 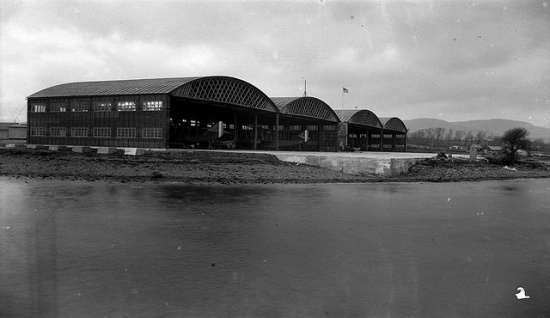 It was September of 1918 before young American Navy aviation personnel were stationed on Whiddy Island. Kemp (grandfather to this reporter) was just 18 when he became part of the defense force there.

In late October of 1918, one of these seaplanes, a Curtis H16, flew out of the base in response to a cry for help from a ship being attacked by a German submarine. (Out over the ocean flew this awkward and heavy plane carrying its young crew. Remember, these were experimental machines. The first airplane flight ever had only occurred in 1903. This particular type of plane had only been flown since March of 1918.) On board were four or five men including Neil Kemp (still a teenager) and Walford August Anderson (only 26 years old.) Anderson was a radio operator and it is believed that Kemp was a spotter or a gunner.

The plane was out longer than expected. One of the witness said he began to grow worried as the sun set and the light began to fade. Nonetheless, there was still light and the bay was flat as the plane droned closer.

Newspaper clipping from the Monett Times (Anderson’s home town) containing a letter from a witness to the crash who was also a friend of Walford Anderson.

Later, the pilots explained that due to a mirror effect in the calm water, they had misjudged their landing. The plane slammed into the water, tearing one of the large motors off its mounting. The force of the landing broke the plane in half. Anderson was killed instantly as his wireless set tore loose and smashed into his head. Kemp was also badly injured and spent some time in a hospital. He carried large scars on his legs and back for the rest of his life. 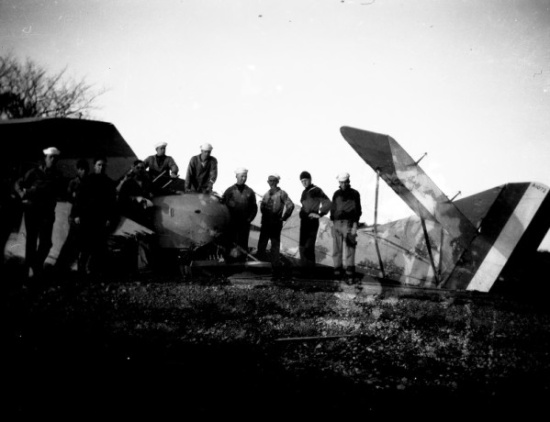 The plane was dragged up on land. Two pieces of the plane, a part of the wing and the steering column were inscribed with the date as well as the place, Whiddy Island, and presented to Kemp in the hospital by his service mates. He treasured them until his death. The pieces remain with a family member in Eureka today. 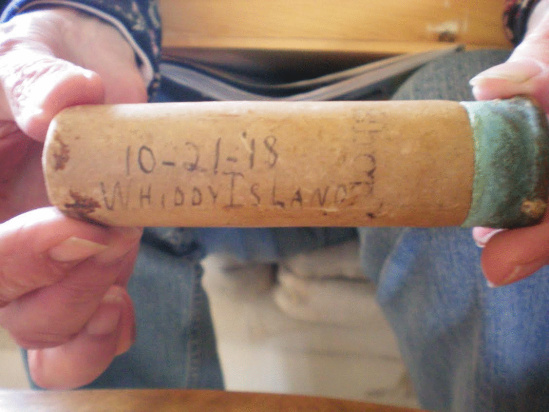 Part of the plane inscribed with date and place given to Neil Kemp while he was in the hospital recovering.

The Irish people commemorated Anderson’s death and Kemp’s suffering on the last Saturday in June, the 100th anniversary of the assassination of Archduke Ferdinand which began the Great War and the 95th anniversary of the signing of the Treaty of Versailles which officially ended it.

On a sparkling Irish afternoon over 20 boats, some carrying around 100 passengers, crossed Bantry Bay to the site of the crash. 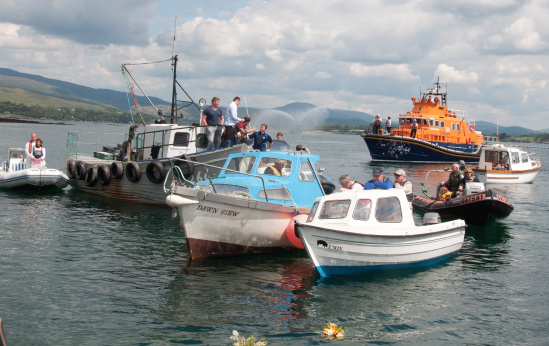 Boats gathered for the blessing of the fleet and the laying on the water of three commemorative wreaths.

As the boats approached the crash site, a large fire fighting vessel behind the rest released its water cannons sending spray arcing like white wings up into the air and misting down into the bay beneath. 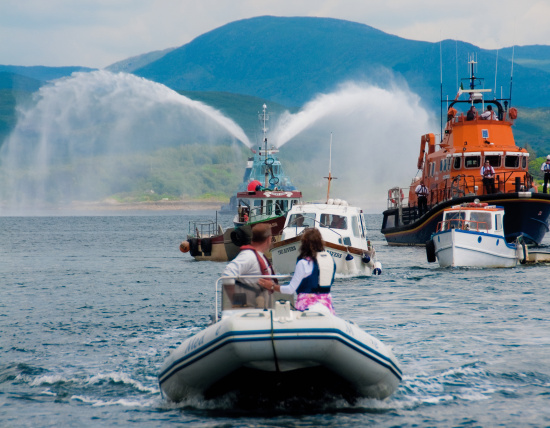 Boaters watch as water sprays from a vessel as part of the commemoration ceremony. 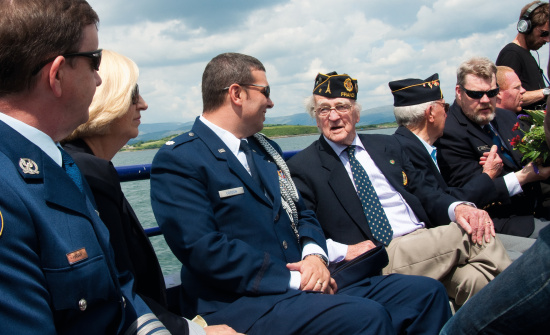 A number of current and former servicemen and women from both the Irish and American military were present including Col. Barry Hanan from the Irish Air Corp seated far left, his wife seated second from left, Lt. Col. Sean T. Cosden, the defense attaché at the US embassy seated third from left, three members of the American Foreign Legion including Sean Rickard holding flowers and wearing sunglasses on the right.

A Catholic priest opened the ceremony with a prayer and a blessing of the boats. Three wreaths were laid—one by the Islanders, one by the American Legion, and one by Kemp’s descendant (this reporter.) Taps were played by a member of the Legion. 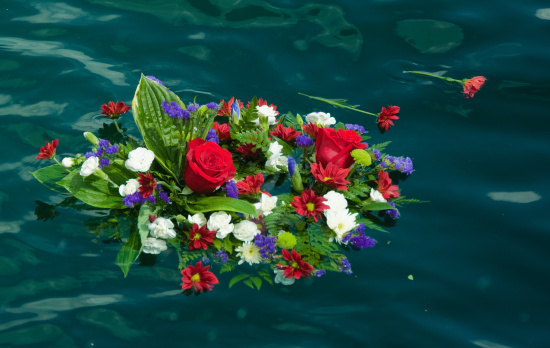 Wreath floating on the crash site. 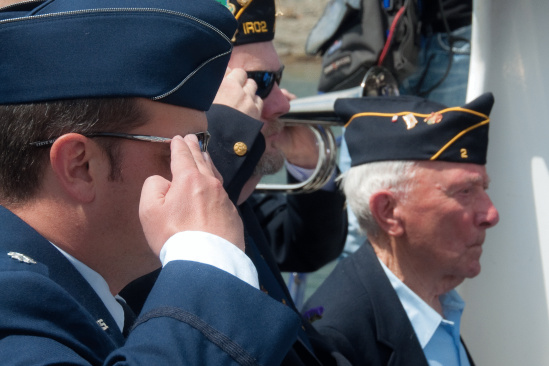 A member of the American Legion played taps as military personnel salute.

The flotilla then rounded the island to the site of the memorial stone’s unveiling. In an impressive display of seamanship, the vessels pulled smoothly next to the dock and released their passengers quickly. Several speeches were made by political figures including a historical description by the event organizer, Tim O’Leary. Poems about the tragedy of war were read. An exquisite piece of chamber music was played by the Doric String Quartet which moved several listeners to tears. 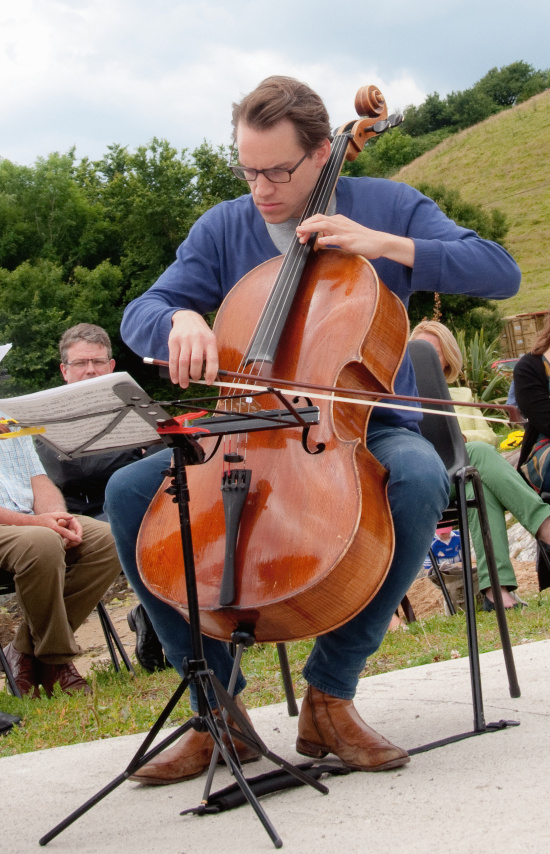 One of the musicians

A bugle salute was played as the memorial stone was unveiled. 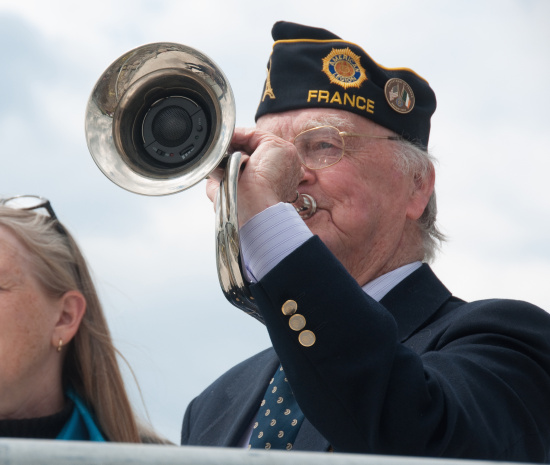 It read in part,  “His life was placed on his country’s altar.” 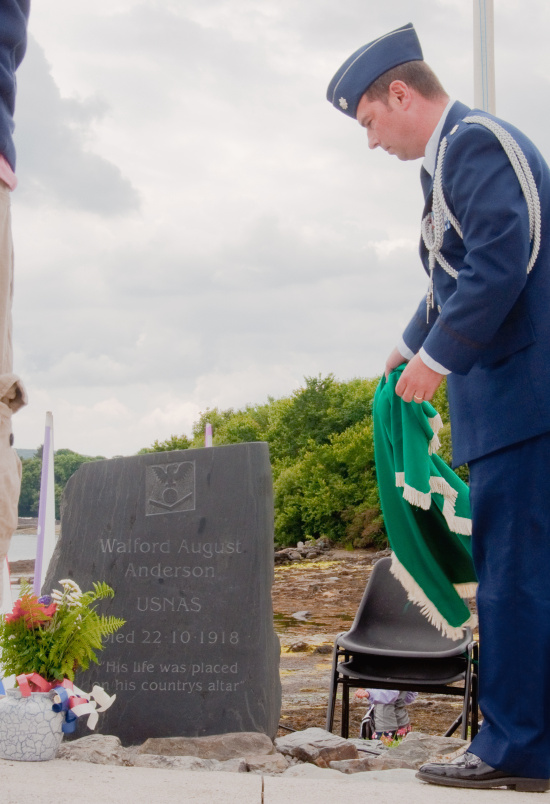 The marker, crafted by a local man, remains on the island as a permanent, silent reminder of the death of an American serviceman far from home and family.

Afterwards, lunch was served to the large crowd and lectures on the history of the Whiddy Island American airbase were given.

Below is a picture of Walford Anderson. The death of this high school debate captain and football player came less than three weeks before the signing of the Armistice. 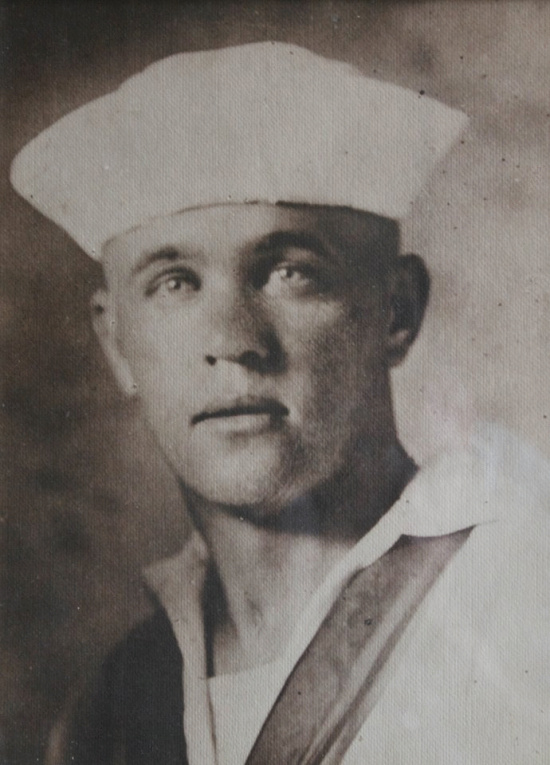 Anderson’s crew mate, Neil Kemp is said to have gone into the Navy with red hair at age 17 and come out of the hospital at age 18 with totally grey hair. He bore the scars of the terrible accident his whole life. But, he did have a life. He raised 7 children and grew old with the woman he loved.

Anderson died at age 26 leaving a young widow behind. He never had a child. He never grew old. Thanks to the Islanders and the stark memorial they have erected, Anderson’s sacrifice is not forgotten.

Other media links about the event: (In addition, a documentary is being made about the island and will include footage of the event.)