« Um, Have You Seen Any Porcupines in Humboldt Lately? 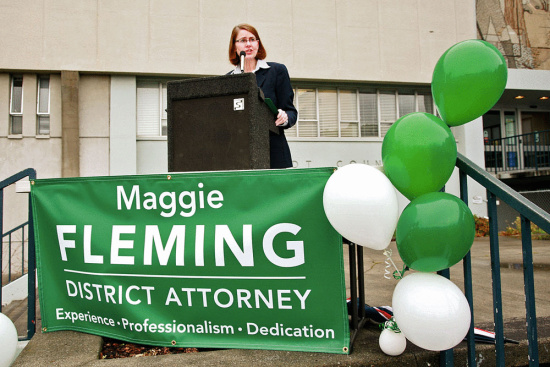 Maggie Fleming says that she’s happy to have support from local law enforcement groups, but that it won’t affect her ability to be impartial.

The district attorney candidate was responding to questions about a recent $2,500 campaign donation from the Humboldt Deputy Sheriff’s Organization, a group that has endorsed her and that includes deputy sheriffs, probation officers, DA investigators and other members of law enforcement. Blogger John Chiv, who actively supports Deputy DA Élan Firpo in the race, pointed out last month that the Fleming campaign had apparently not reported the group’s $2,500 donation within 24 hours as required by law.

As of last year, the state’s Fair Political Practices Commission requires campaigns to report within 24 hours all donations of $1,000 or more made during the last 90 days before an election. Before last year the window was just 16 days.

Fleming said yesterday that her campaign treasurer, Rick Grimm, was unaware of that regulation until someone read Chiv’s blog and questioned him about it. “Rick has not served as a campaign treasurer before and although he spent a lot of time going over the rules he didn’t catch that one,” Fleming said.

The donation was made on either April 1 or 2, she explained, and the required 497 form was submitted on April 8. What’s the penalty for that lapse? A $10-per-day late fee, according to the FPPC.

Some blog commenters have, perhaps predictably, interpreted this late reporting as a deliberate attempt at obfuscation, and they say she’s tried to hide the endorsement of the HDSO.

“I never tried to hide it and shared that information with others,” Fleming said, adding that all four DA candidates sought the group’s endorsement. “At the first forum we had on March 13 I listed the agencies that had endorsed me including the HDSO,” Fleming said. “That was televised.”

As for being impartial, Fleming said officers have expressed appreciation for her willingness to prosecute fellow officers who have broken the law.

“I highly value the endorsement of law enforcement,” she said, “because they are among the people who actually know the dedication, records and capabilities of all the candidates.”