MATTHEW IN THE MIDDLE: Once Again, The Middle is Victorious! »

Lt. Steve Knight: Sharing Stories and History as He Retires 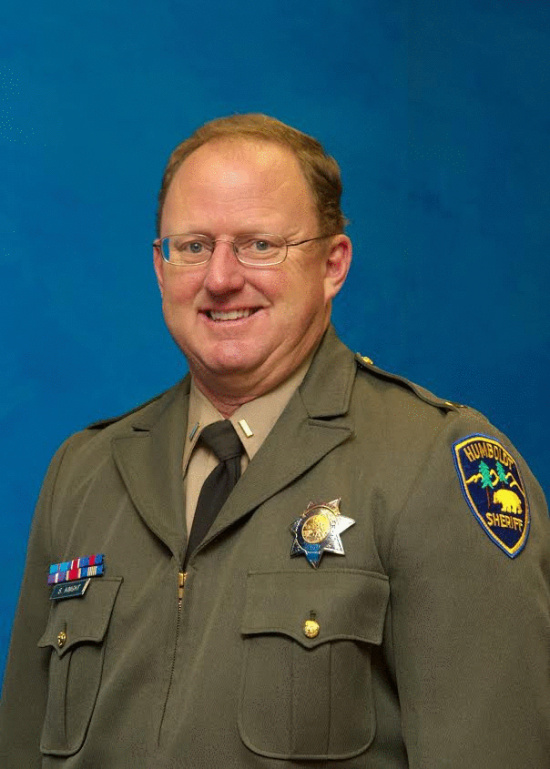 In his 30 years as a member of the Humboldt County Sheriff’s Office, Lt. Steve Knight has collected quite a few stories and seen the world of law enforcement change drastically. He’s gone from a student in wildlife biology at Humboldt State to a lieutenant in charge of criminal investigations and, as the public information officer, he has been the voice of the Sheriff’s Office for the last three years, earning the respect of many for his openness and willingness to work with the press.

“Steve is a genuine, honest and sincere person,” explained co-worker Lt. Wayne Hanson. “He is a good guy. He always does what is right.” And, Hanson said, “He has a lot of compassion.” Hanson illustrated this description with a story. “I remember one time we were on patrol. He worked one beat and I worked another.” According to Hanson, he discovered that Knight had seen a woman and two small children hitchhiking on the freeway. Without fanfare, Hanson said, Knight “paid for bus tickets for the three of them out of his own pockets.” No one but Hanson even knew he’d done it.

Hanson explained, “He didn’t get a thank you or an atta boy. He just did it because that’s the kind of guy he is.”

Changes: From the time he first began working part time for the Sheriff’s Office while he was a student at HSU until now, Knight has seen a lot of changes in law enforcement. “When I started there were no cellphones,” Knight said. “If we needed to call in, we’d find a pay phone and we’d spend 20 cents. Or if we were cheap, we’d call 911 and have them pass the info.” GPS devices didn’t exist when he began working. “We used to use compasses,” he said. In spite of that late start, Knight is a fan of technology. He thinks video cameras should be more widely used by law enforcement. “It is good transparency,” he said. “I used to bring a tape recorder when I interviewed subjects.” Being recorded by camera or tape recorder, he said, “takes getting used to.” However, he believes “it can help officers when there are false accusations and hold them accountable when they’ve done something wrong.”

His boss, Sheriff Mike Downey, said Knight relates well with other people. The two men, who were hired on the same day, have spent a lot of time together over the years. “He is not only a coworker but a good friend,” Downey said. “We watched our kids grow up together.” Then, he added warmly, “He was always a funny guy.”

A cheerful man known for his laughter, Knight looked for the humor in his job. He explained in an interview this week, “You try to forget the tragic events. Heinous crimes. You just don’t dwell on it. You deal and move on to the next thing.”

Knight is quick to poke fun at himself. At one time he worked with helicopter crews searching for marijuana gardens along with Downey. The current sheriff, he said, was good at spotting marijuana grows. Then, he added dryly, “I could spot the ones a blind man could see.”

One time, Knight said, when he was working undercover, a man sold him narcotics. When the man’s defense attorney saw Knight, he stopped in his tracks, turned in disbelief to his client and said, “You tell me this guy doesn’t look like a cop? Incredible!” Then, Knight said, the attorney, as quickly as possible, pled his client guilty.

Enforcing Marijuana Laws in Humboldt County Over the Years

Marijuana plays a large role in his stories. Its place in shaping the county, law enforcement, and his own career is huge. He pointed out, “Marijuana has always been an issue since the late 70s. It has had a significant impact from the day I first started in this line of work.”

Knight tells stories that could only have happened in Humboldt — like the time he grew marijuana and his kids helped him. “[The Humboldt County Sheriff’s Office] had a case back when proposition 215 first passed,” he said. “We [busted] a medical marijuana grow with over 100 plants.” The seedlings were being grown hydroponically. Because the law was new, no one quite understood how to deal with the situation. The plants were young. Did they need to be grown to show that they would yield a considerable amount of processed bud? No one quite knew what to do.

According to Knight, the order came down from a judge that law enforcement needed to “grow and maintain the plants until the court orders them destroyed.” Knight and a few other officers became gardeners. “I ended up moving the plants to one of our storage facilities,” he explained. “Myself and two other deputies rotated taking care of them. My kids came over to help water them.” 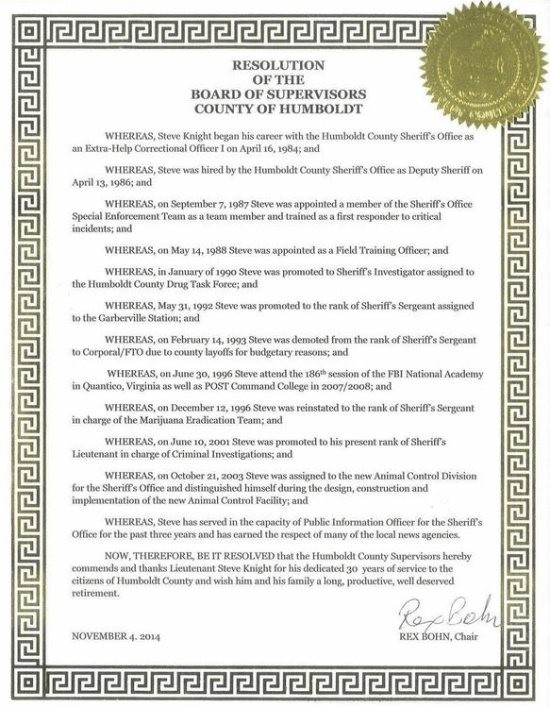 Resolution by the Humboldt County Board of Supervisors.

Eventually, Knight said, he and other officers “harvested and manicured them to improve our expertise.” Later, when he would be called to testify in marijuana cases, Knight joked that he enjoyed telling the court that he’d once grown marijuana.

What Knight Liked About His Job

Knight’s love of this area is obvious. One of his favorite parts of being with the Sheriff’s Department was getting to see the countryside. “Getting to see the beauty of this county was amazing,” he said.

One of the tasks Knight is most obviously proud of is shepherding the Animal Shelter as it came under the direction of the Humboldt County Sheriff’s Office in 2003. When he took over, they didn’t even have a building. “[The current site] was just dirt,” he said. “My job was to bring animal control into the Sheriff’s Department. Uniforms, stars, training on how to use radios, training on policy and procedures — these all had to be managed carefully as the Humane Society moved out of operating the animal shelter.”

This was all brand new. Though the building had already been designed, Knight took on the task of helping the new staff establish policy and procedures, get computers, etc. “Everything down to what dog food we were going to buy,” he explained.

Knight explained that as much as he enjoyed parts of his job as a law enforcement officer, it had some difficult aspects. “It affects the family,” he said. “When you take the job, you’re available 24-7. When someone found a meth lab at 2 in the morning you’re expected to drop everything to deal with it. When you get the phone call, the whole house typically wakes up, especially your wife.” In addition, he said, he and other officers have to miss family gatherings and their children’s events, not to mention working many holidays.

And lately, he said, because of AB109 (California’s public safety realignment), his job can be frustrating. “We get in this line of work to make a difference. If [criminals] walk out the jail before the officer even finishes his report, it has an effect on him and the community.” If someone steals something, he said, it doesn’t make the victim feel good if the criminal gets out fast. “It is almost like victimizing the victim twice.”

“It makes it easier to retire,” he explained. And career-wise, he said, “it is a good time to pursue other opportunities.”

Overall, though, Knight said his job was good. “I’ll miss the people — the people I work with, the people in the community. It was always a sense of accomplishment when you helped out a victim of a crime, especially if you prevented a crime.”

Humboldt will miss you, too, Steve. The staff at the Lost Coast Outpost is officially in mourning. You could always be counted on to be good-humored and helpful. Often, late at night or in the midst of your other duties, you found time to provide us information so we could get answers to our readers. And, you made us laugh — no small gift in a job where you see more than a little of the dark side of life.

May the ways you walk be easy and may the phone never again ring in the middle of the night. 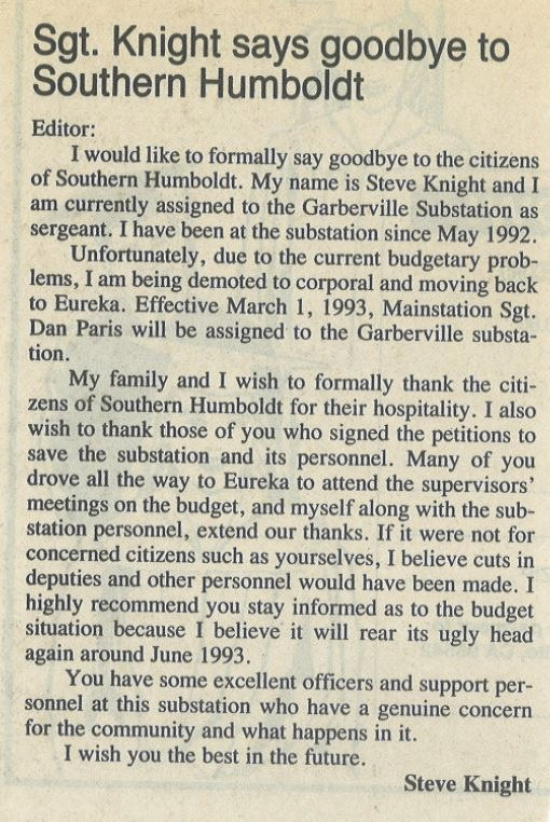 Newspaper clipping of the farewell letter Steve Knight wrote 1n 1992 to the Southern Humboldt Community when he was transferred back to the main office in Eureka.