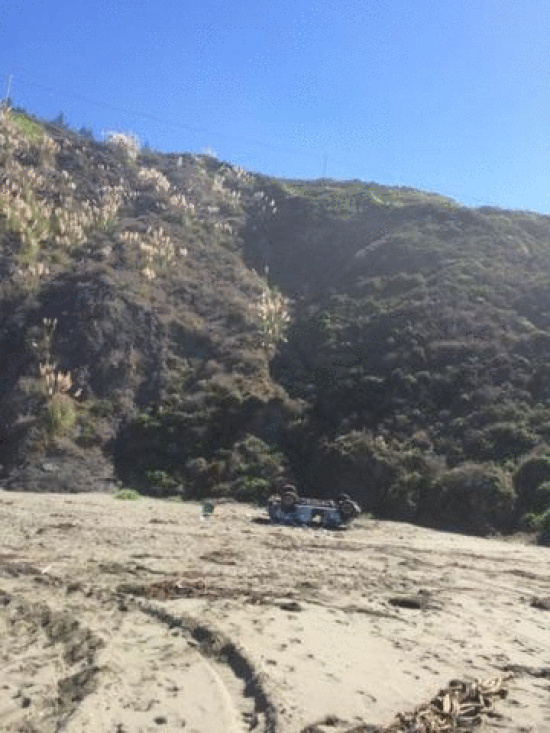 A woman from Humboldt, her two children, and the family dog may have been involved in a serious crash on Hwy 1 according to an interview conducted with Capt. Greg Van Patten of the Mendocino County Sheriff’s Office by the Press Democrat. The article states the accident is being investigated because authorities are concerned that it could have been intentional.

According to Guy Casey, a former firefighter who was cleaning trash and debris from Blues Beach near the Chadbourne Gulch area north of Fort Bragg, the three family members were sent to out of the area hospitals eventually. The two children flown out by helicopter. 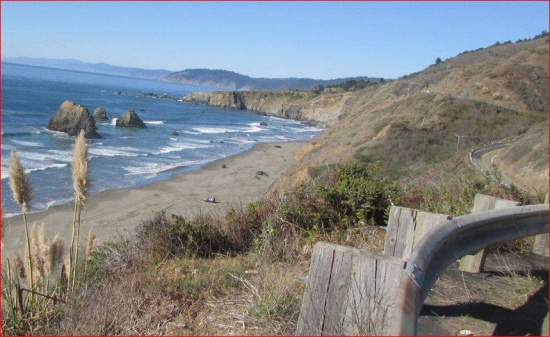 The beach area where the vehicle was found. Photo provided by Mendocinosportsplus (If you don’t follow them on Facebook, you should.)

The Press Democrat’s article states that the crash may not have been accidental. According to their interview with Van Patten, the Mendocino law enforcement officer said, ““We’re trying to establish if it was a crime or mental health related issue.”

Casey, the firefighter who was one of the first on the scene, described what he knew. He said that the vehicle was seen about 20 ft from the embankment on the beach itself about 11 a.m. on Friday by one of the people cleaning up the area. Casey approached the Isuzu and saw the vehicle “upside down and mangled badly.” 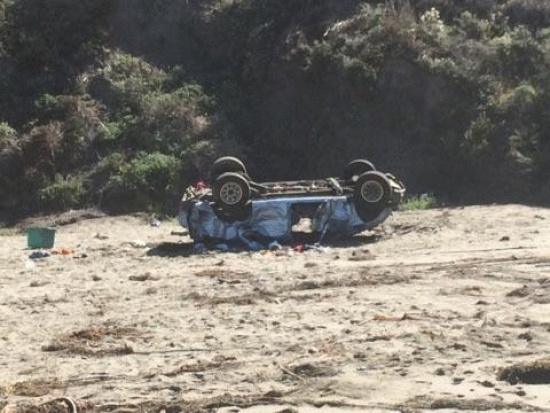 The vehicle after the victims were removed. [Photo by Guy Casey]

“It is a pretty straight down 300 foot drop,” he explained, where the Isuzu rolled down. A woman, he said, “was half in half out” of a window. Her legs were sticking out, he explained. Casey said that he could see “stuff out of her car” on the hillside.

“She was trying to talk to the two year old,” when he first saw her, he explained. Later, he said, the medical exam showed that “she had a broken leg and a broken arm.” He immediately called for help.

Casey said that there were two other children about 6 and 2 years old in the car. “Myself and a firefighter had to extricate the [youngest] child from the car,” Casey said. “When we cut off his shirt—broken arm and broken femur with an apparent head injury. He wasn’t crying at all when we got there. When we got him out was when he started to cry.”

The six-year-old child was injured but was talking. “[He] was asking questions,” said Casey. “He didn’t seem like he was in a whole lot of pain. He seemed to be like a normal 6 year old.” According to Casey, both children were flown to out of the area hospitals for treatment.

The family dog was “was walking around,” Casey said. “He was a little beat up but wasn’t in bad condition.” The dog, Casey said, got a ride in an ambulance to the local hospital where he was picked up by family members. The woman, Casey said, was transported to Mendocino District Hospital from where she, too, was flown out of the area for treatment. 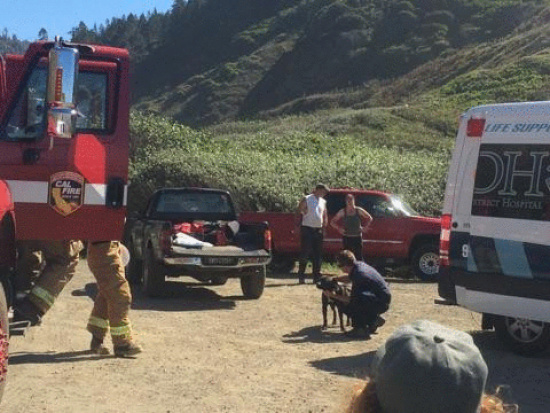 First responders with the family dog. [Photo by Guy Casey.]

Casey said the woman told him that the accident had happened around 8 p.m. Thursday night. When asked about the possibility that the woman may have purposely driven off the road, Casey was skeptical. “From the way I saw the accident,” he said, “to me it completely looked like an accident. An experienced driver on these roads could crash easily.”

However, he said, “I didn’t ask a whole lot of questions. I just tried to get them out.” 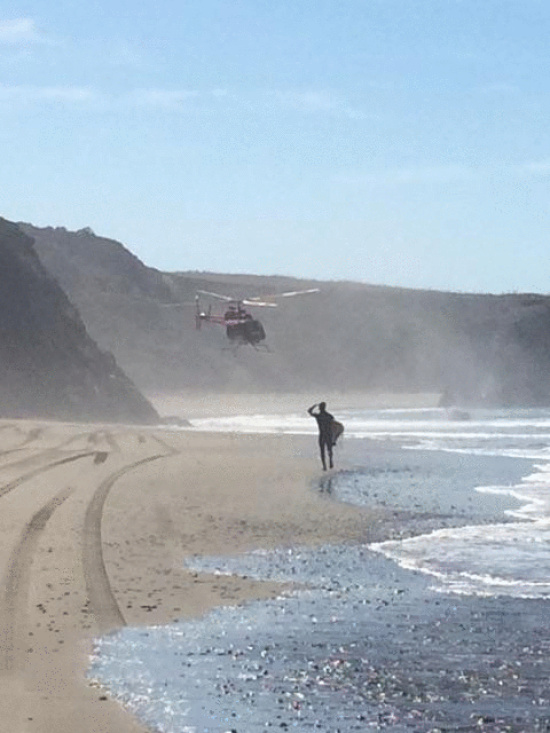 Helicopter responding to the scene as a surfer watches. [Photo by Guy Casey.]