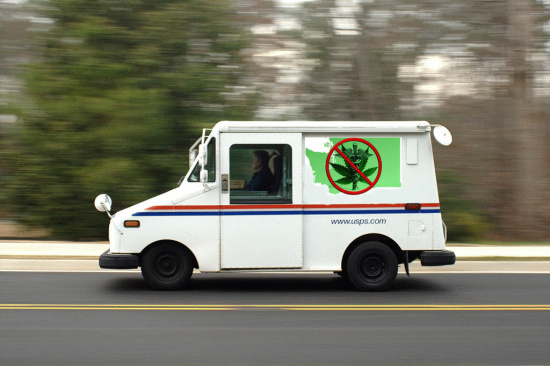 If a news publication containing advertisements for marijuana is sent through U.S. mail, it violates federal law. That’s the stance the United States Postal Service took earlier this month.

This could affect multiple news publications in Humboldt County, including the North Coast Journal and Emerald Magazine. When asked for an interview, USPS national headquarters in Washington D.C. responded to the Outpost with a public statement:

Under current federal law, it is unlawful to place any written advertisement in any newspaper, magazine, handbill, or other publications, for the purpose of seeking or offering illegally to receive, buy, or distribute a Schedule I controlled substance, including marijuana. It is also unlawful to use the mail to facilitate the commission of a felony related to a controlled substance. The federal statute provides criminal penalties for mailing such advertisements which is enforced by federal law enforcement agencies.

The issue was raised about a month ago, when a local weekly newspaper in Long Beach, Wash., published three full-page ads in its weekend entertainment guide, Coast Weekend.

Chinook Observer Editor and Publisher Matt Winters told the Outpost in a phone interview that the Pacific County paper’s marijuana ads caused a chain reaction within the USPS that led all the way to the top.

A regional post office employee took notice and contacted USPS managers in Portland regarding the legality of the ads. The Portland hub responded with a public memo.

“They supplied us with a written copy of that memo, which states publications containing marijuana advertisements weren’t mailable,” Winters said. “We were concerned our papers would just sit in the loading dock if we included the marijuana ads in our paper, stalling delivery of the entire thing.”

Unwilling to risk losing newspaper distribution, the staff decided to pull the weekend insert from all of the mailed editions — about 40 percent of the publication’s circulation.

That’s when the Oregon Congressional Delegation started asking questions. USPS responded to the delegates with a detailed ruling on Dec. 15.

US Postal Service Memo on Marijuana Ads by tomangell

“It was determined [stopping distribution] would need to be enforced through the Justice Department, and they’ve determined that they’re not going to make any formal rule to regulate,” Winters said. “With this week’s edition we’ve gone back to the status quo. We’ll wait and see what happens from here.”

When asked how the Journal would respond to a federal crackdown, the Leishman was hesitant to respond.

“At this point in time I don’t know how to comment on that,” he said. “We’re great believers in freedom of press and freedom of speech.”

The USPS taking a stance on distribution of illegal material isn’t necessarily a free speech issue. Publications still have the right to print the ads, and they could still choose to distribute via private mail carriers.

A federal agency rejecting the distribution of information is somewhat akin to prior restraint cases that were famously decided by the Supreme Court. The key difference here being the government’s refusal to distribute a publication after it’s been printed, not prior.