$1000 and Thousands of Pounds of Trash 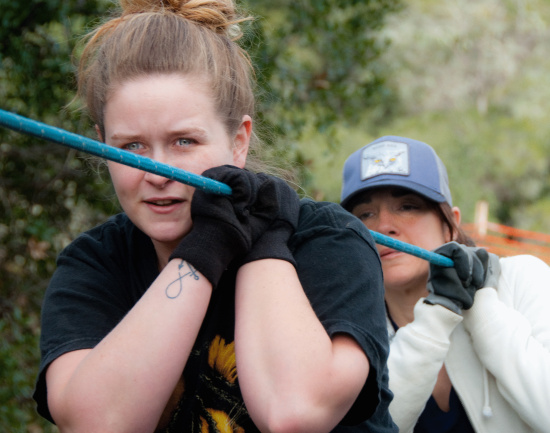 Pulling together. Volunteers from across Humboldt haul massive amounts of trash from an illegal dump near Alderpoint on Sunday. [Photos by Kym Kemp unless otherwise indicated.]

In about four hours yesterday, over 25 volunteers including members of Southern Humboldt Technical Rescue hauled thousands of pounds of trash out of the ravine by Carter Creek near Alderpoint and raised over a $1000.

In November, a large number of butane canisters suspected to be from a hash lab explosion were tossed over the edge of the road into the long time illegal dump. Three recent cleanups have taken thousands of pound of trash from the area including thousands of the butane cans but more work is necessary to finish the job. 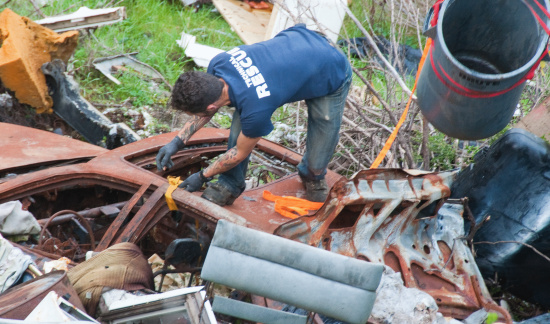 Kai Ostrow, Chief of the Southern Humboldt Technical Rescue ties a pulley system for hauling garbage out of the ravine to the top of a car buried in trash. 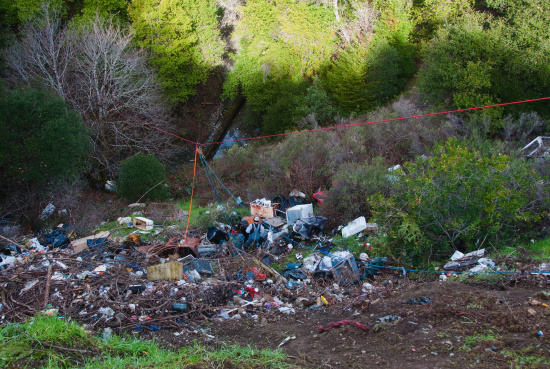 Wider view of the trash heap with the pulley system anchored to the car. 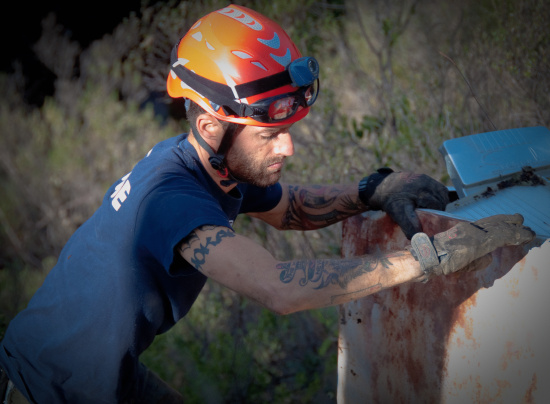 Garbage is gathered and the smaller items stuffed into bags. 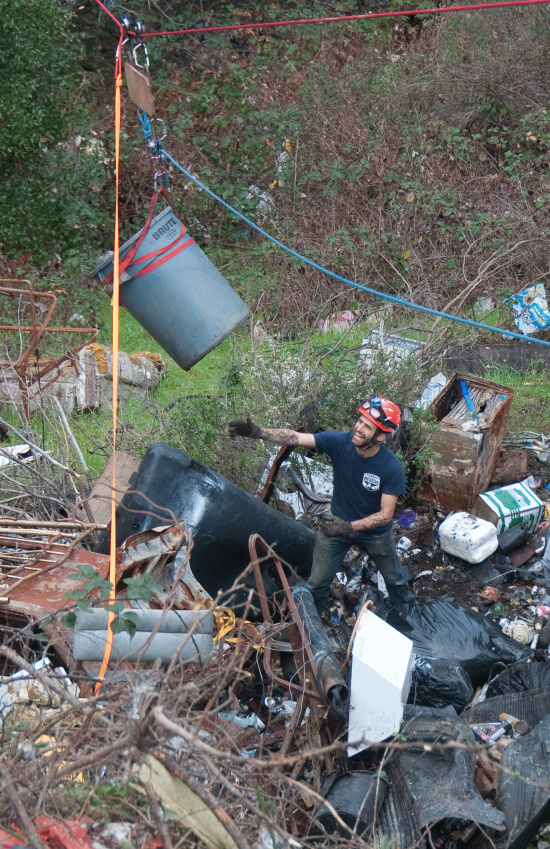 Garbage cans are lowered to the crew.. 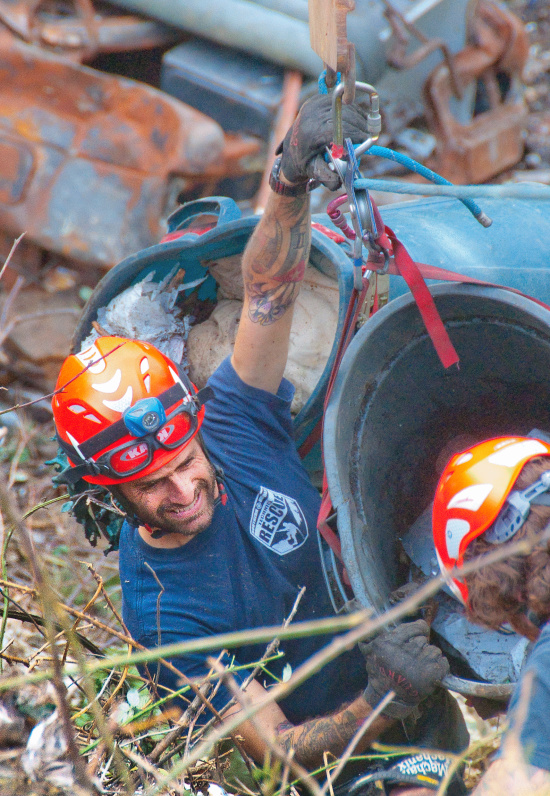 Then, the full trash bags are stuffed into garbage cans… 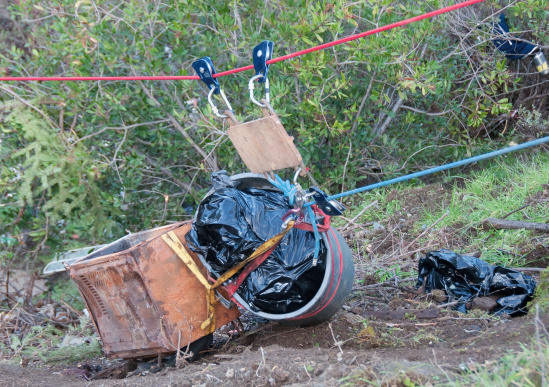 The cans are hauled up… 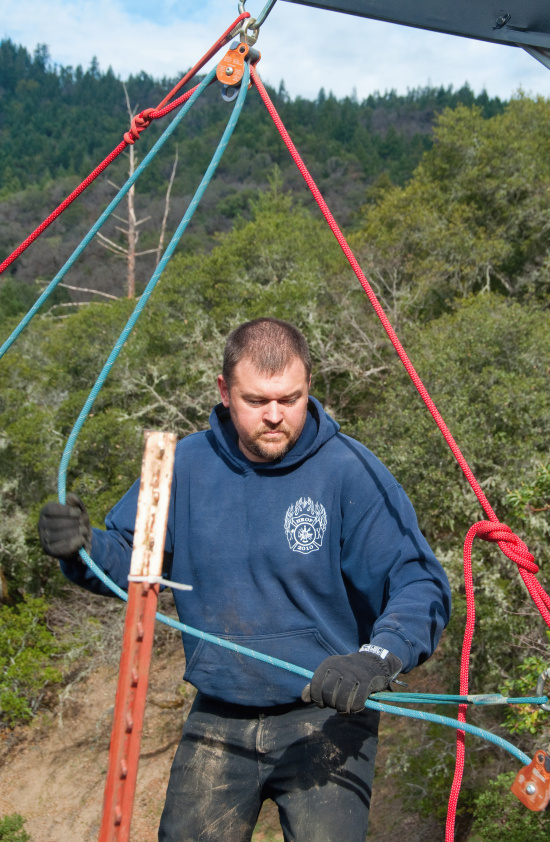 …with an ingenious pulley system. One of the Southern Humboldt Technical Rescue crew members directs a line of volunteers on pulling together to drag the cans out of the ravine. [See top photo.] 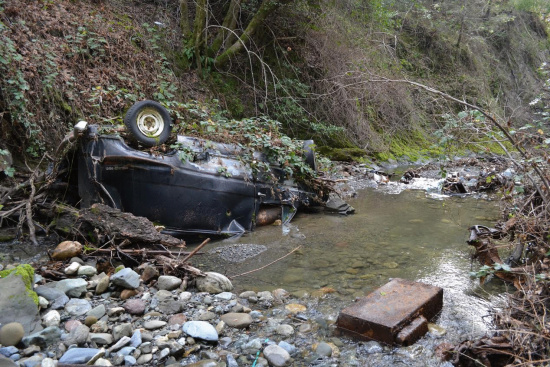 Garbage has been thrown into Carter Creek for years. [Photo by Ross Huber.] 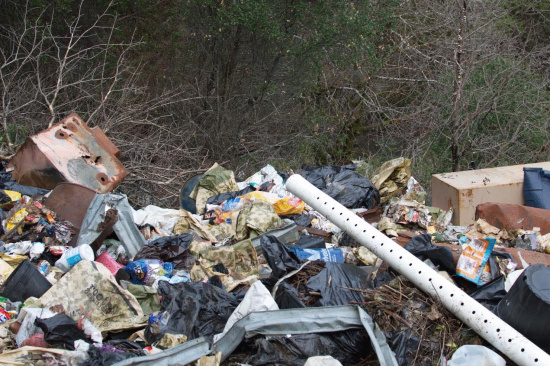 But much of it is fairly recent. [Photo by David Jernigan.] 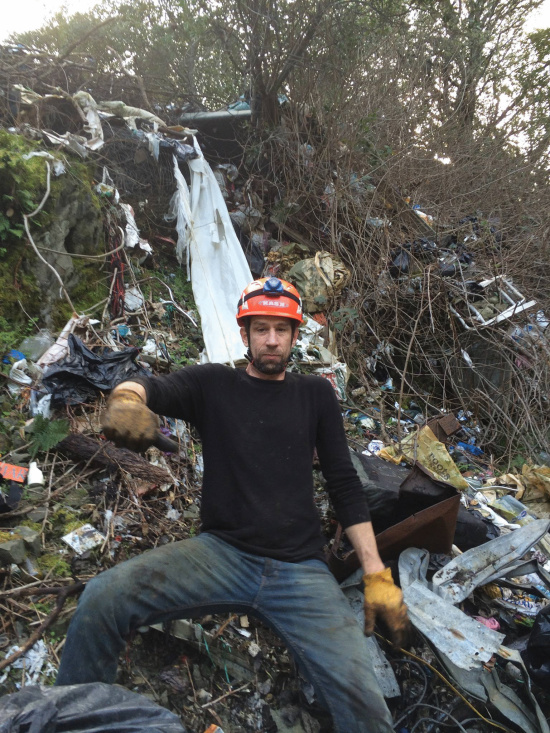 The cascade of trash threatens to overwhelm the volunteers. [Photo by David Jernigan.] 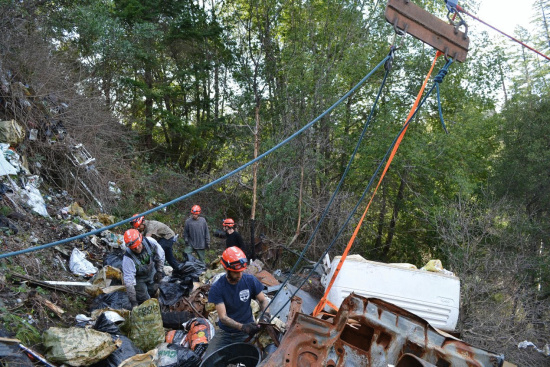 Nonetheless, they weren’t daunted. Above are five of the eight volunteers who waded into the heaps of garbage to bag it up. [Photo by Ross Huber.] 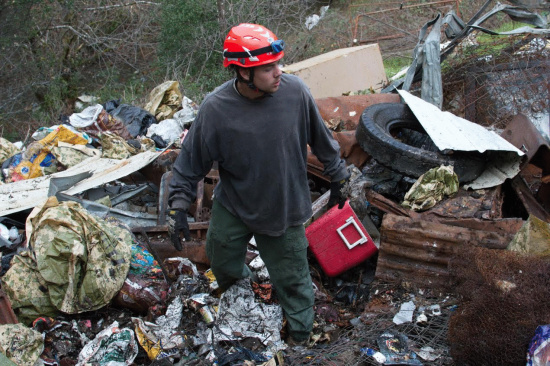 For almost four hours, volunteers loaded trash into bags and cans. The trash was then hauled to  the road and packed into vehicles to be taken to the dump. [Photo by David Jernigan.] 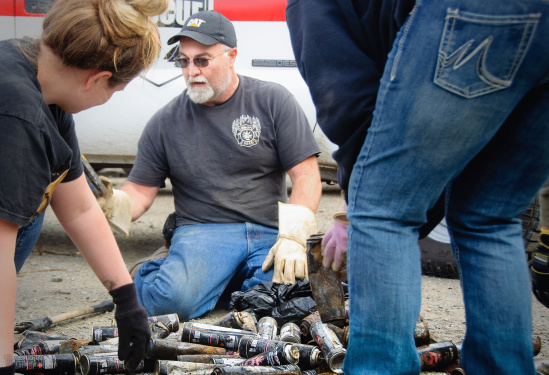 Once hauled out, any butane cans must be sorted. The ones without holes must be punctured to keep them from exploding when they are compacted at the dump. 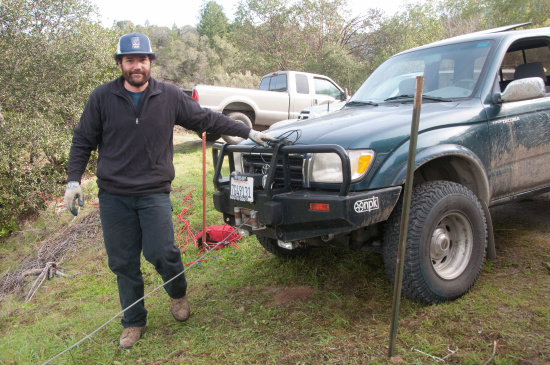 A winch was used to haul up heavy items… 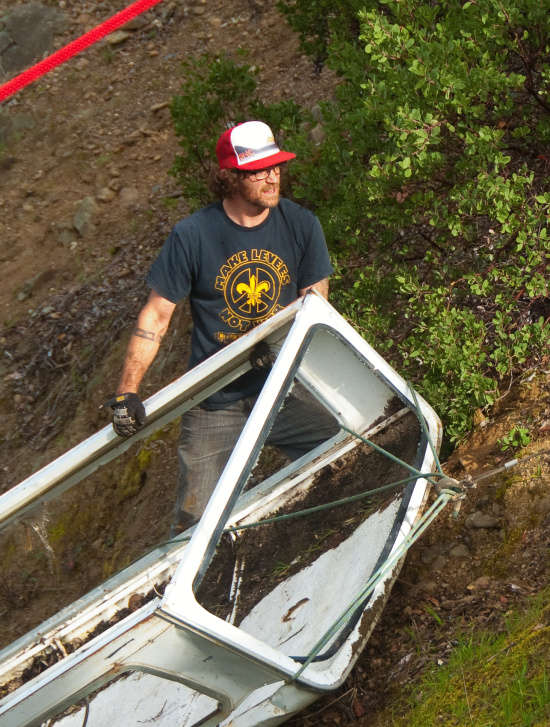 …like this old camper shell. A refrigerator, a dishwasher, a heater, a wood stove, couches, tires and old bikes were all removed from the steep ravine. 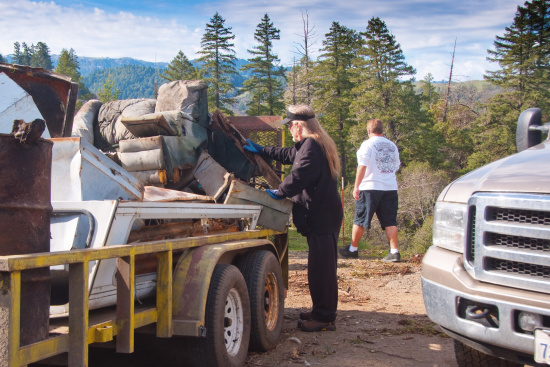 Four truckloads and two trailers full of trash were hauled off. 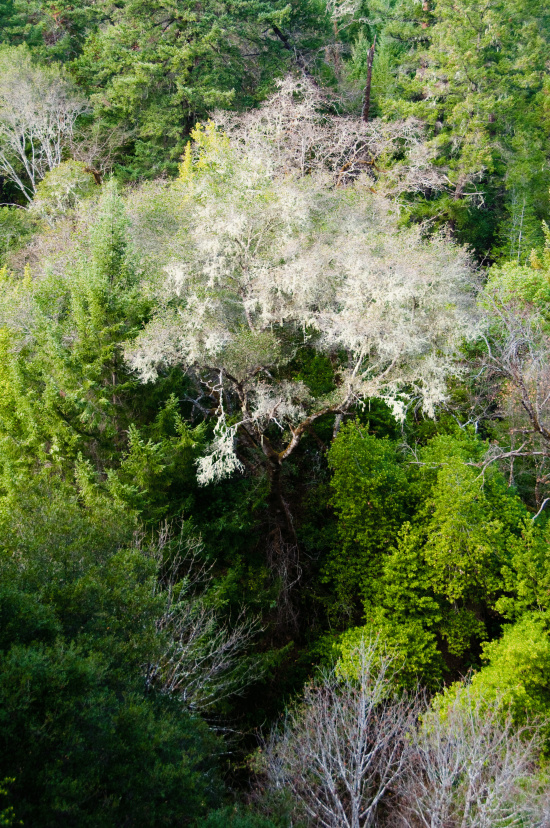 In spite of the trash, the area is beautiful. 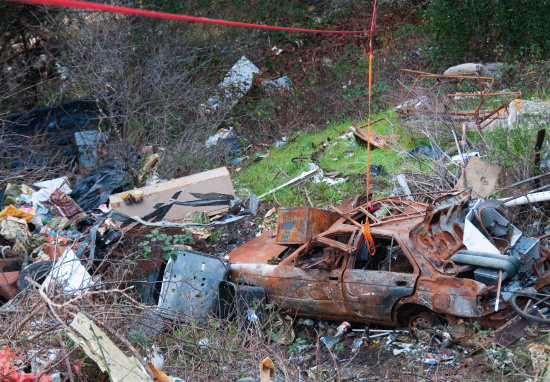 The volunteers removed thousands of pounds of trash from around this wrecked car. Compare this photo with one from earlier where the bottom of the car was hidden in garbage. 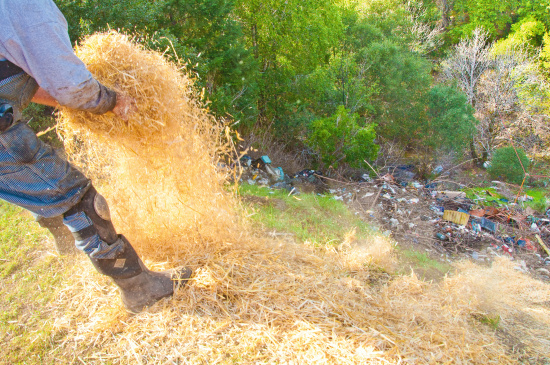 Hay was spread where the earth had been disturbed as rain was expected this week. 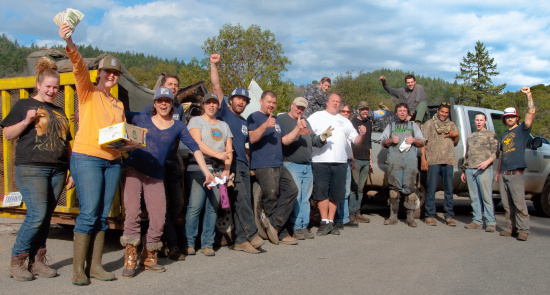 Many of the volunteers gather at the end of the event around a trailer full of trash. They each received a voucher for a free lunch from the Alderpoint store. One woman, second from the left, waves the $800 that had been collected up to this point. Eventually, over $1000 was brought in to help pay for dump fees.

Volunteers are trying to coordinate another trash run soon. Watch this site for more information. Want to contribute to the cost of dump fees and help these folks remove even more garbage from our beautiful hills? Go here.