One Can at a Time: Butane Canisters and Tons of Trash Recycled by Crowd of Volunteers

On Sunday, a crowd of around 25 volunteers gathered just east of Alderpoint at an illegal dump site on Carter Creek which flows into the Eel River. Over 4000 pounds of trash were taken out of the site. This included most of the remaining butane canisters which had been tossed there in early November and partially removed earlier this month.

By 10 a.m. the large turnout by the Carter Creek dump was filling to overflowing with cars, trucks, trailers and people willing to work. But, the Southern Humboldt Rescue Team, which had planned to rappel over the edge and retrieve the trash, was sadly called to the scene of a tragedy—a young woman kayaker had drowned and they must recover her body.

The cleanup plans had to change…and fast. 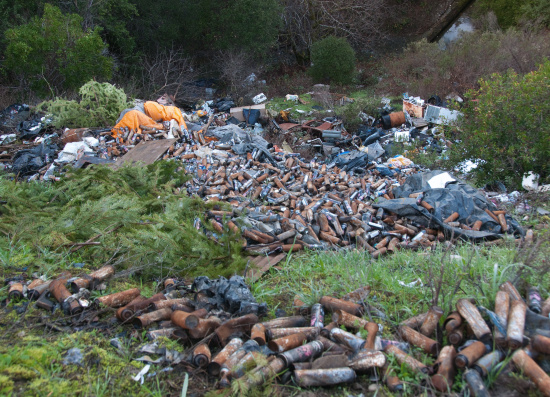 The first look over the edge of the very steep hillside was daunting. How to get all those cans up to the road without the skills and tools of the Southern Humboldt Technical Rescue team? 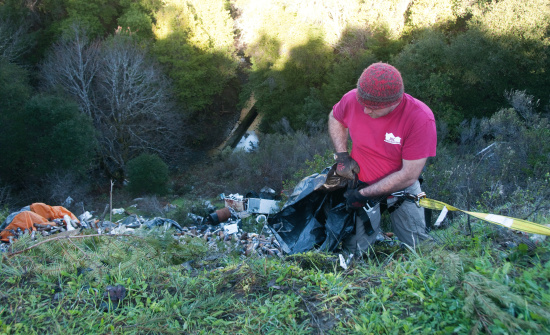 One person, Chris Anderson, quickly volunteered to be lowered over the edge in rappelling gear. (If you look closely in the photo above, you can see Carter Creek with a log in it way down below.) First, trash bags and then later trash cans were lowered to him and filled one by one. 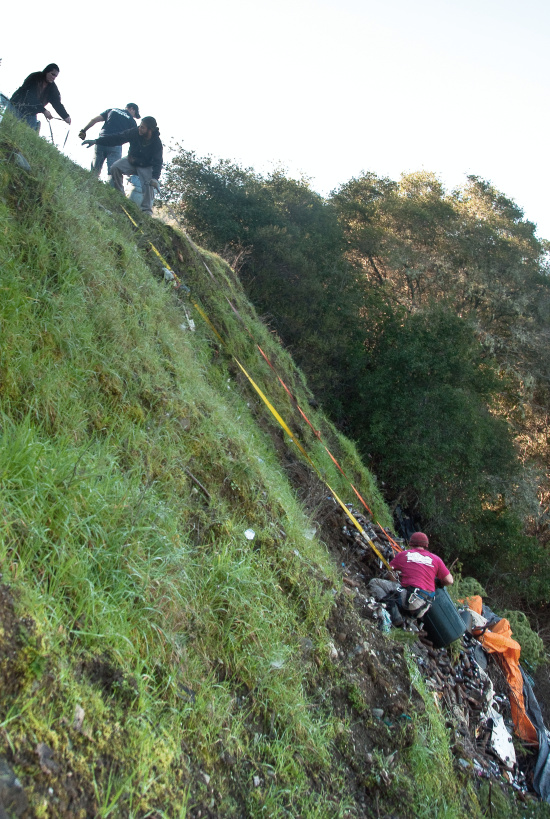 Crews anchored Anderson who loaded each butane canister as well as other trash into the garbage cans which were hauled up to the road. He did this for four hours with few breaks. 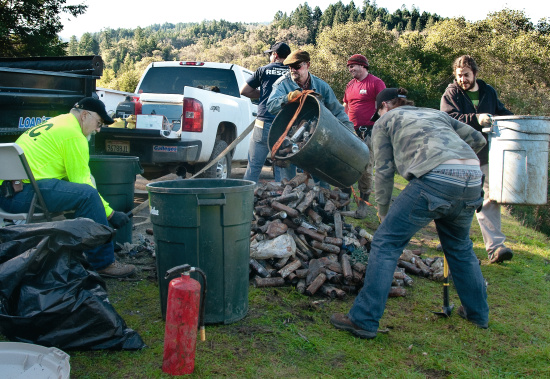 On the flat next to the road, the garbage cans were emptied then sorted. The butane canisters must be punctured if they didn’t already have holes in them in order to be recycled. (The tireless individual sitting on the left whacked every can of the 800 pounds that needed to be punctured with a tool he invented himself. Then he and his wife hauled the whole thing to the dump!) 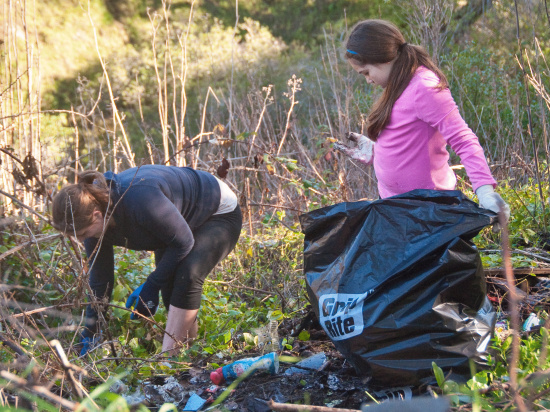 Meanwhile, those not needed for sorting and hauling began cleaning up the land all around the main area of the Carter Creek dump. 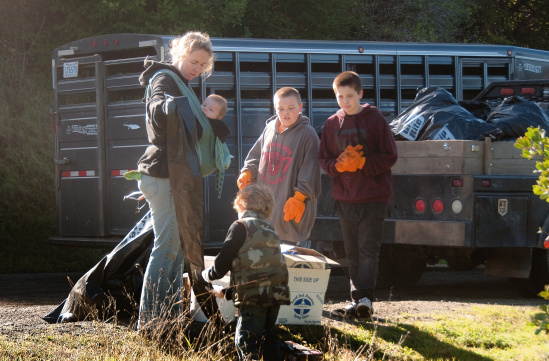 In spite of the trash, families with their kids enjoyed a beautiful sunny day while they made their community a little cleaner. 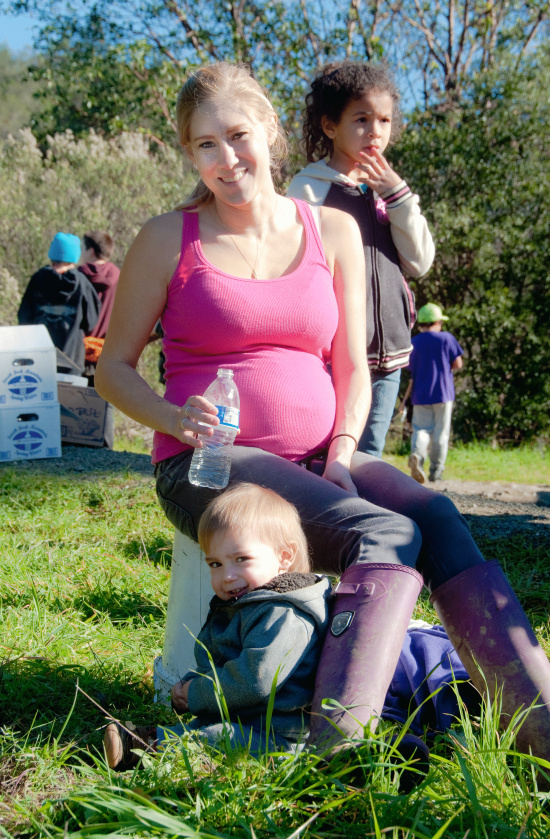 Contentment and satisfaction showed when folks stopped for lunch. 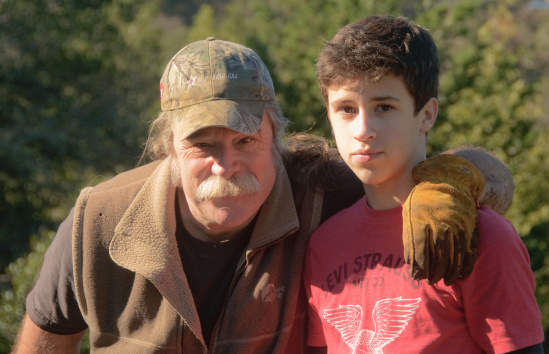 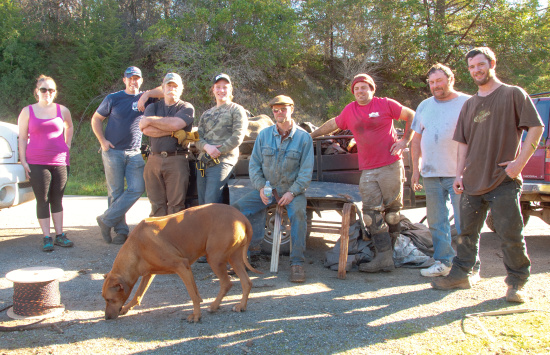 After the work, it was almost beer thirty for this crew. When they’d finished tidying up the site, these workers hauled trash to the dump in Redway and then headed home to relax with the remainder of their Sunday. 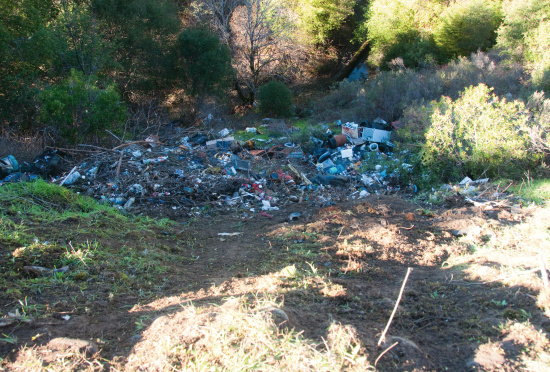 The Result: a cleaner hillside. 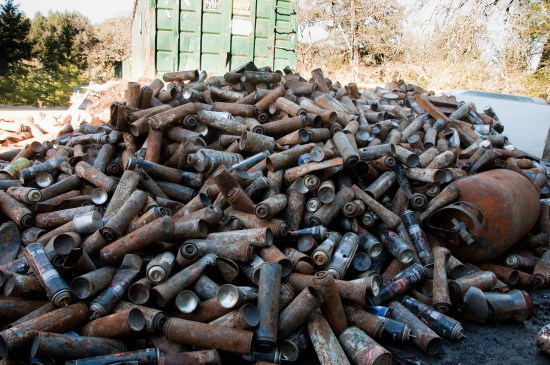 Eventually, there were 800 pounds of butane cans waiting to be recycled at the Redway Transfer Station. 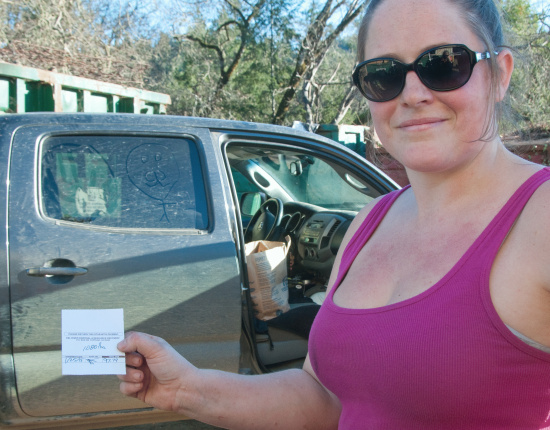 Multiple trucks and trailers streamed into the Redway Dump to offload the garbage and the grubby workers. Like a SoHum version of Rosie the Riveter, the smiling lady in the photo above hauled a load of 1080 pounds from the Carter Creek trash site.

The Lost Coast Outpost and their sister site the Redheaded Blackbelt went prepared to pay for the dump fees. However, multiple people donated money to cover the costs. There’s cash left over for next time to help clear out more of that mess.

Plans are being made for the next foray into the massive amount of garbage still at the bottom of that hill by Carter Creek. Members of Southern Humboldt Technical Rescue team have offered to help. The Lost Coast Outpost will be there to document a community making a difference—-one can at a time.

Can’t wait for a chance to get your gloves dirty? The Eel River Cleanup Party is meeting today at 11 a.m. in front of the Tiger Lily Bookstore at the north end of Garberville for another day of sunshine, laughter and making a difference.

“UNLESS someone like you cares a whole awful lot, nothing is going to get better, it’s not. “
The Lorax