(PHOTOS) Burning Manila: The Morning After »

On July 17, 2015 at about 0900 hours, an officer with the Fortuna Police Department was working unformed patrol when he observed a 2002 Toyota Tacoma in the area of 12th Street at Newburg Road. The officers observed that the vehicle matched the description of a vehicle stolen in Fortuna on July 15th. The officer conducted a check on the vehicles license plate and confirmed that the vehicle was stolen.

The officer followed the vehicle until additional units were in the area and then attempted a traffic stop in the vehicle while traveling westbound on Main Street. The driver fled and entered Northbound Highway 101. The vehicle continued North in Highway 101 at spreads reaching 100 MPH.

As the vehicle approached Loleta Drive, the driver made an abrupt lane change and exited onto the Loleta Drive off ramp. At the top of the ramp, the driver was met with by a waiting Marked CHP patrol unit. The driver rammed into the CHP unit in a continued attempt to flee. The driver then drove the pickup off of the roadway down the embankment and back onto Highway 101.

The vehicle continued northbound and exited at Humboldt Hill. The driver traveled several residential streets. The driver then turned into Blue Spruce Drive and drove the vehicle into a heavily wooded area.

Once in the wooded area, the vehicle became disabled and both occupants fled. Officer gave chase into the area and deployed Fortuna Police Department K9 “Nordy”. Moments later, Nordy located the passenger Crystal Lappel (age 21 of Portland, OR and formerly of Fortuna). Lappel was taken into custody for obstructing / resisting arrest and violation of the terms of her current local probation. Lappel was transported to St. Joseph Hospital for medical clearance prior to booking at the Humboldt County Correctional Facility.

The Fortuna Police Department redeployed Nordy and moments later Jonathan Krasnay (age 28 of Myers Flat) was located hiding under heavy brush and taken into custody for Possession of Stolen Property, Felony Evading, Assault with a Deadly Weapon. Krasnay was transported to St Joseph Hospital for medical clearance prior to booking at the Humboldt County Correctional Facility. 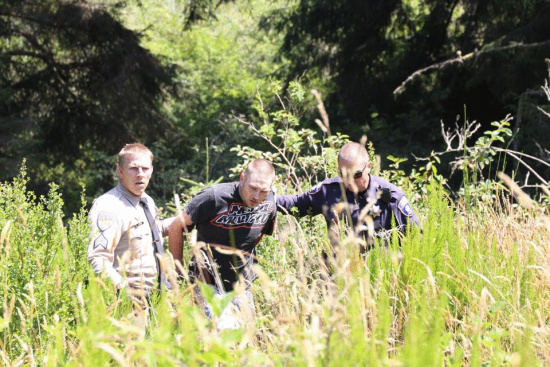 UPDATE, 12:18 p.m.: The suspect, identified as Jonathan Phillip Krasnay, age 28, has been arrested on charges of felony evading arrest, possession of stolen property and assault with a deadly weapon. The latter charge is for allegedly ramming a CHP vehicle with his stolen car. [Note: A previous version of this post misidentified the suspect. The Outpost regrets the error.] Officers are now saying Krasnay was likely not involved in last night’s drive-by shooting. 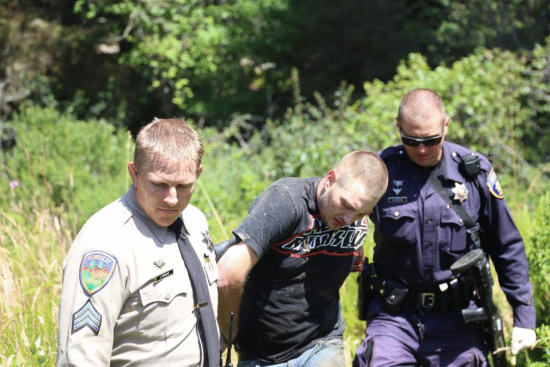 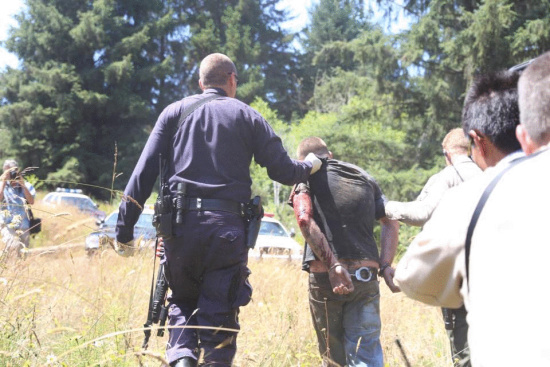 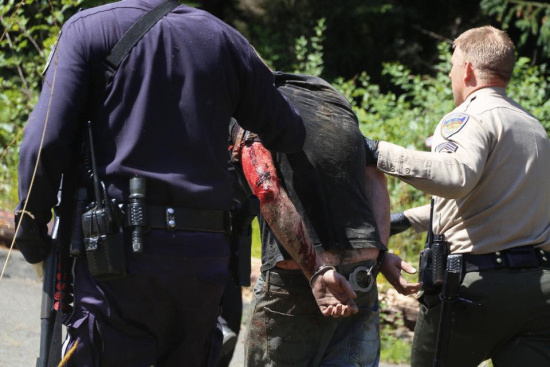 Wounds inflicted by K-9 unit, according to officers on the scene. 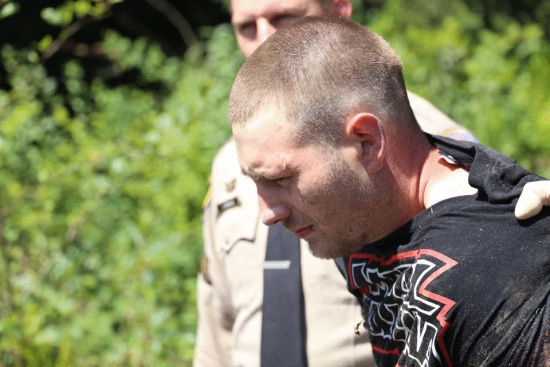 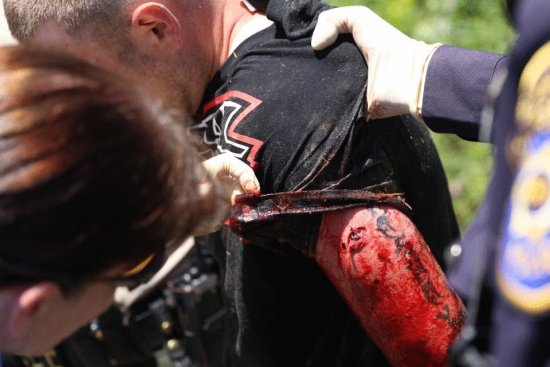 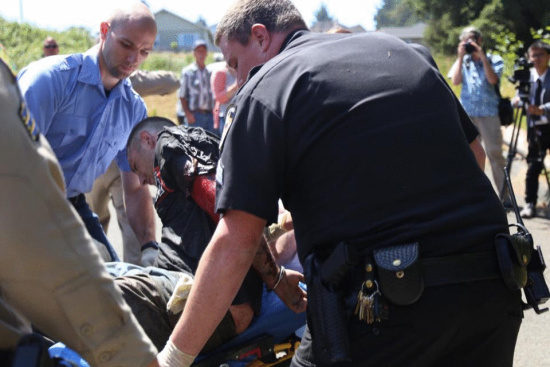 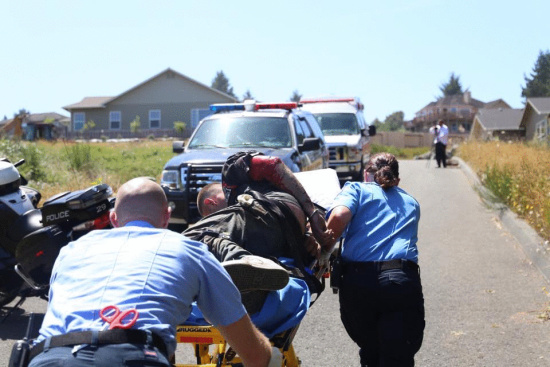 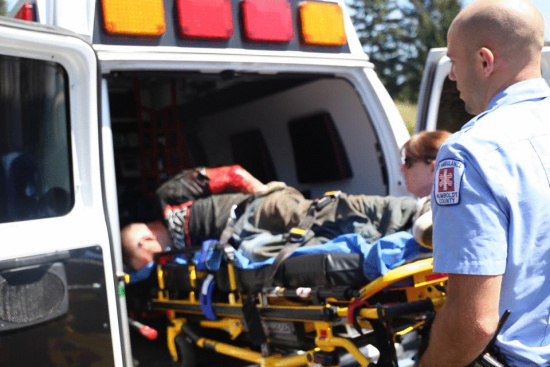 UPDATE, 11:54 a.m.: The suspect is now in custody, an officer told Outpost reporter Andrew Goff moments ago. The arrest followed a loud commotion in the woods near the site of the crash. Barking dogs and moaning were heard, and a voice yelled, “Show me your hands or I will shoot you.” 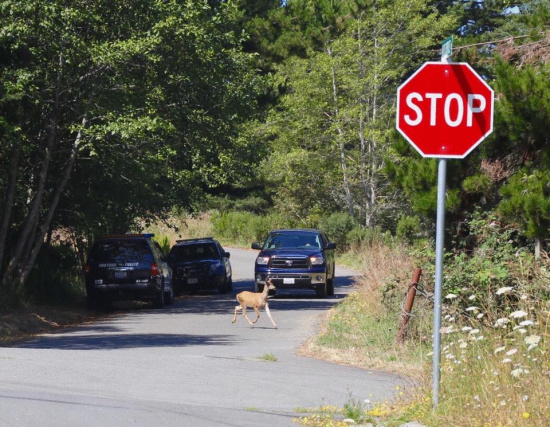 The helicopter seems to be scaring the local fauna.

UPDATE, 11:40 a.m.: The search continues, though there have been no confirmed sightings of the suspect since he fled the scene where the vehicle left the road in the Humboldt Hill area. The scanner has gone quiet. 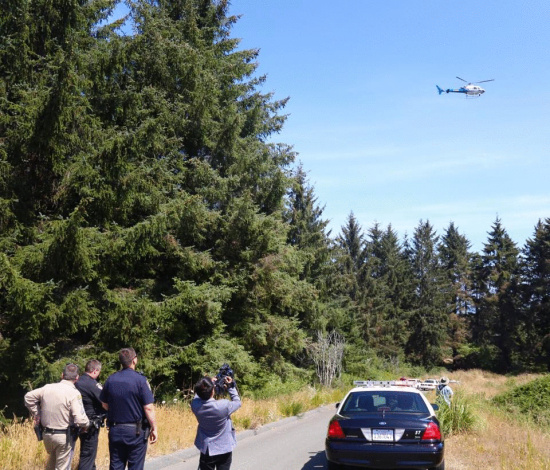 A CHP helicopter searches the scene. By Andrew Goff. 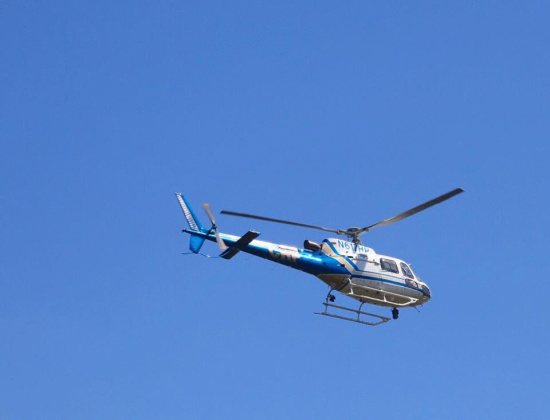 UPDATE, 11:08 a.m.: Scanner traffic from last night indicates that the drive-by shooting referenced in today’s events occurred in Fortuna around 11:29 p.m., when several gunshots were fired at a residence on the 3400 block of School Rd. A vehicle was also found to have bullet holes in it, according to the scanner. A Fortuna officer found a shell casing on the scene, and the gun was later identified as an FN Five-seven semi-automatic pistol.

The Fortuna police SUV that was in pursuit of the suspects’ vehicle crashed into and became lodged on a wooden pole lining the road. Contractors at a nearby construction site who witnessed the chase offered their excavator to pull the law-enforcement vehicle off and then move the damaged pole.

A CHP helicopter is en route. Law-enforcement has a perimeter set up around the entire wooded area on Humboldt Hill, near where the vehicle left the road. K-9 units can be heard barking in the woods, according to the Outpost’s Andrew Goff.

The dot on the image below shows where the vehicle left the road. The wooded area in the image has been surrounded by law enforcement. 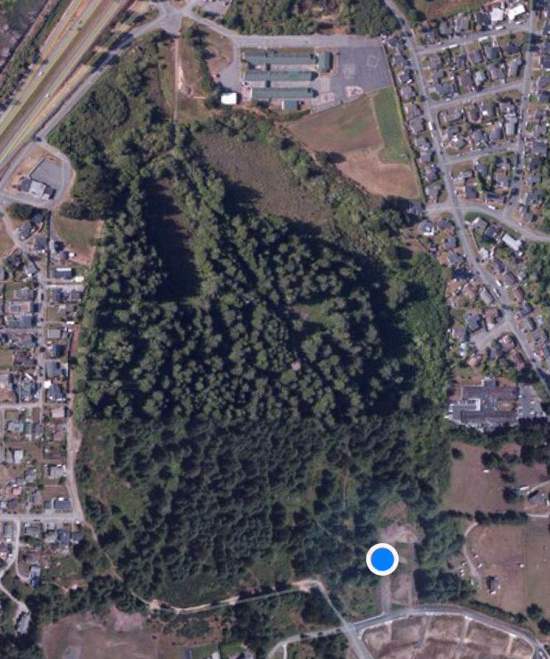 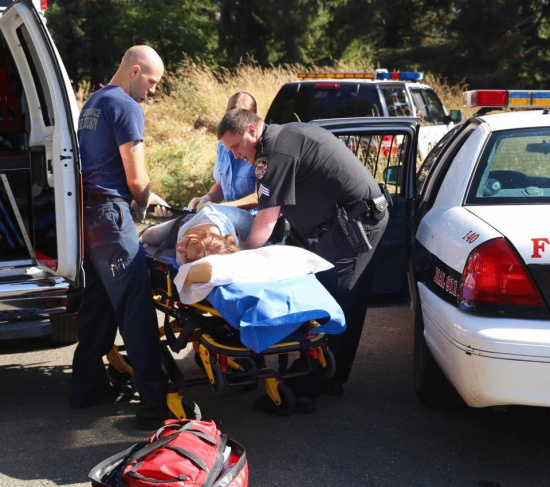 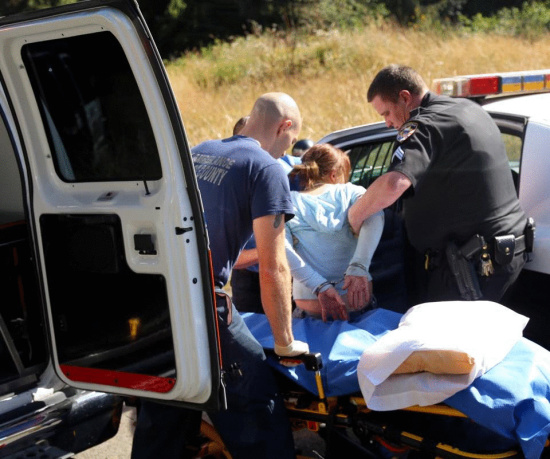 UPDATE, 10 a.m.: A suspect named [redacted], considered armed and dangerous, remains on the loose, according to scanner traffic. A young woman was taken into custody after being detained by officers with help from a K-9 unit. She was transported to the hospital by ambulance. The leg of her jeans was covered in blood from a dogbite she sustained, according to the Outpost’s Andrew Goff, who is on the scene.

Law-enforcement is deploying more K-9 units and armed officers into the woods to search for [redacted]. 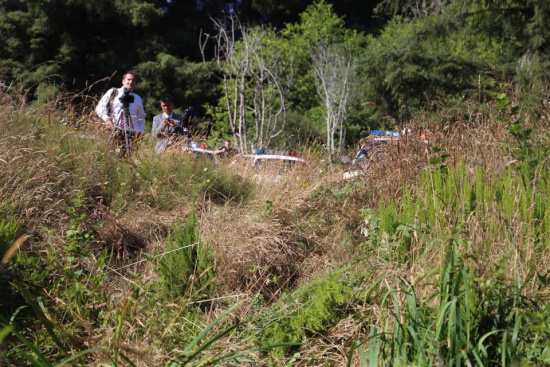 This is the path the vehicle took off the road. By Andrew Goff.

California Highway Patrol was involved in a high-speed chase this morning that ended on Blue Spruce Drive on Humboldt Hill when the suspect’s vehicle went off the road. According to scanner traffic one suspect was detained at gunpoint at 9:39 a.m.

Scanner traffic also indicates that another suspect, named [redacted], who was involved in a drive-by shooting last night, remains at large. He fled the scene and should be considered armed and dangerous. During the chase the suspect vehicle struck a CHP car and disabled it earlier this morning, according to scanner traffic. [The suspect] is described as a white male, 5’ 11” and 190 pounds with brown hair and brown eyes.

Three witnesses say they heard a young child, possibly eight or nine years old, screaming as the vehicle went off the road, though officers have been unable to locate any child. Officers are currently searching the area on foot.

Officers are also searching for [redacted], and they have asked for South Bay Elementary School to be on lockdown, if there are indeed summer school classes in session today.

Fortuna Police Department and Humboldt County Sheriff’s Office deputies are on the scene. 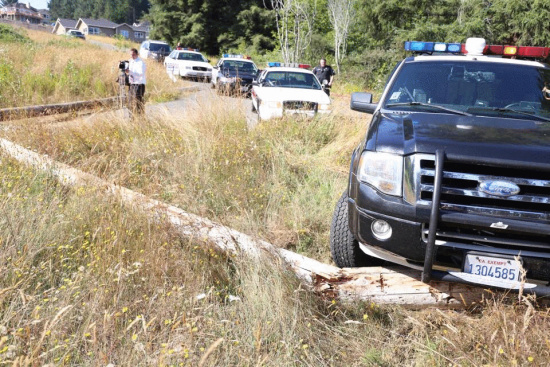 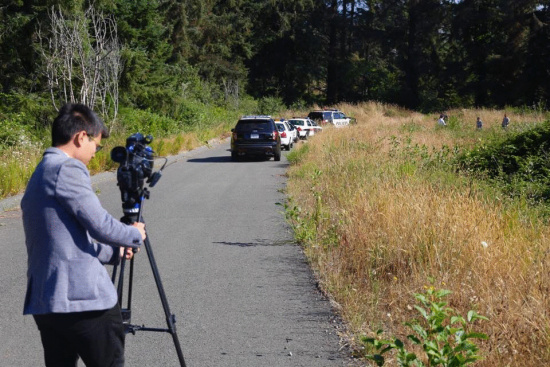 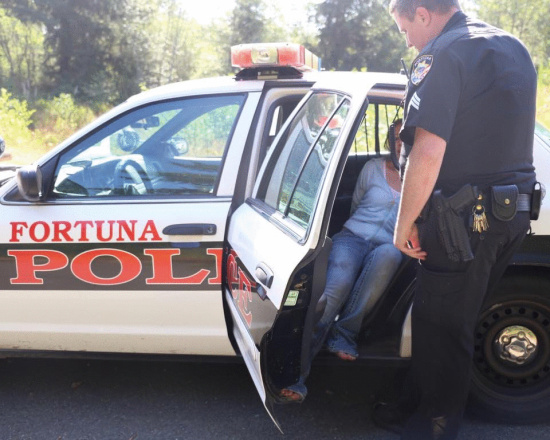