Sheriff Seeks Man Who Allegedly Assaulted Buddy With a Hatchet »

In less than two weeks, money will start rolling in to county coffers from Measure Z, the half-percent countywide sales tax approved by voters last November. And in anticipation of the April 1 launch date, county government is asking residents for advice on how to spend the new income.

The best part? You don’t even have to schlep to the Board of Supervisors’ chambers on a Tuesday to weigh in; you’re already where you need to be: the Internet. The county is using its Open Humboldt forum to ask county residents about their priorities for Measure Z spending.

The language on the ballot was pretty specific. It said that over the measure’s five-year run, tax revenues would be used to

Now’s your chance to get more specific by ranking your personal priorities within some broader subjects. For example, when it comes to addressing rape and domestic violence, where should money be directed — toward victim services, hiring more law enforcement investigators or providing local hospitals with more rape kits?

The opportunity to participate in this survey ends Sunday at midnight, and so far the response rate is pretty meager. While nearly 37,000 people voted on the measure, with 57 percent approving, only 62 people have chimed in through Open Humboldt as of this afternoon. Twenty-eight of those 62 have responded “on forum,” meaning their feedback can be seen publicly. There are even nifty charts and a map breaking down the feedback thus far, so we can see, for example, that only two people have responded publicly from Humboldt County’s Third supervisorial district (Arcata, Blue Lake, Kneeland). 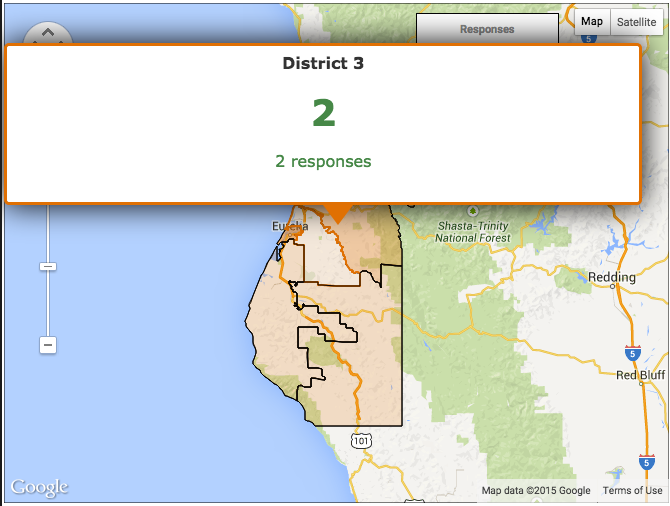 The multiple-choice ranking system on these questions makes for a rather limited degree of feedback. (One participant commented, “I was asked for how I wanted to see the measure Z money spent and then I got a preprinted form. THIS IS NOT HOW I WANT THE MONEY SPENT!!!!!”) However, the poll concludes with an open-ended question, and that’s where some of the most interesting suggestions can be seen. Some examples:

Eastern Humboldt needs county support for Volunteers Fire Departments, often the first and only responders to emergencies. Deputy’s are 30 to 80 miles away and are often unable to respond at all.

County resources need to be directed towards substance abuse rehabilitation services and also towards fixing DHHS’ Mental Health Services. Incarceration does little to deter crime and, in fact, the penal system actually functions as a “criminal college” in which inmates continue detrimental behaviors and are often exposed to recruitment by organized crime groups.

There is no mention [in this poll] specifically of drug trafficking, and the meth problem that is plaguing our area. The same criminals are doing the same crimes over and over, they are addicted and need to fuel their addiction by stealing. When they don’t get their fix they destroy the businesses and buildings in Eureka at night. Most of them live illegally in camp sites in our green belts and parks.

All this talk about fire service getting a huge chunk of this money is not why I voted for Measure Z. I want deputies to patrol the far reaches of the county, District Attorney to be able to prosecute the criminals they catch, and Probation to rehabilitate the people who we KNOW will reoffend.

Judging by our daily volume of comments, we know Outpost readers have no shortage of informed opinions about the county we live in. Here’s the Open Humboldt portal for the Measure Z experience. Have at it, LoCO Nation.