« Sheriff’s Office Responds to Grand Jury; Says it Is and Will Be in Compliance With the Law

Rio Dell Turns Off Man’s Water; Man Allegedly Turns It Back On, Gets Arrested » 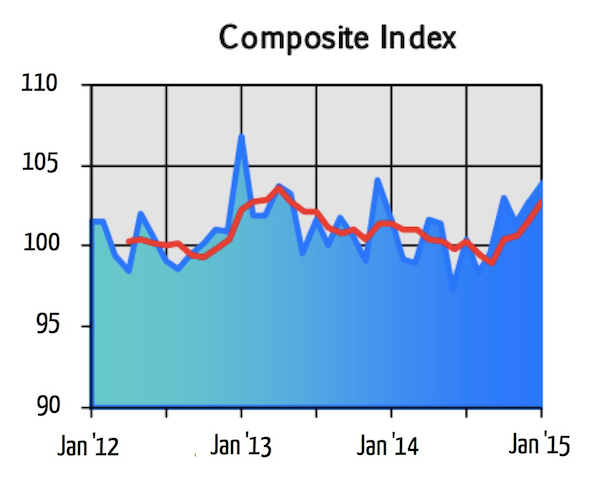 Yes, there’s still plenty of room for improvement, but the latest numbers paint a surprisingly rosy picture of the local economy.

Consider the chart above. which comes from the most recent issue of the Humboldt Economic Index, an analysis produced by HSU students under the direction of Economics Professor Erick Eschker. This “Composite Index” represents the big picture, a meta-analysis of data from several individual sectors. And as you can see, there’s been a strong upward trend since last September, give or take.

As for specific industry sectors, Retail Sales, Hospitality and Lumber all improved since from December, while unemployment claims have gone down.

Our preliminary jobless rate in February (6.2 percent) is down 1.7 percent from a year ago, according to the state Employment Development Department (EDD). That puts Humboldt County in 18th place (from the top) statewide. With 58 counties in California, that means we’re better off than two-thirds of counties in the state. And we’re far better off than such neighbors as Del Norte (9.7 percent jobless), Siskiyou (12.4 percent), Shasta (8.9 percent) and Trinity (10.2 percent) counties. And we nudged out the lower corner of the Emerald Triangle, Mendocino County (6.6 percent).

The sectors seeing the most growth were Education & Health (which added 300 jobs), Trade, Transportation, & Utilities (also plus-300) and Government, which added 200.

A common (and legitimate) gripe about unemployment statistics is that they don’t account for discouraged workers — that is, people of working age who have stopped looking for a job. So let’s dig a bit deeper:

According to the U.S. Census Bureau, Humboldt County’s civilian work force averaged 60.1 percent of our working-age population (people at least 16 years old) between 2009 and 2013. That’s a bit lower than the state and national averages during that period — 63.7 percent and 63.8 percent respectively. But it’s about the same as Mendocino County’s (60.3 percent) and it’s better than Trinity (47 percent), Del Norte (44.7 percent) and Shasta (54.4 percent) counties.

How about median income? Let’s crunch those numbers, too:

Of course, these numbers lose some credibility when you consider the underground economy, but that’s where the official data fail us.

If you’re hoping for a dark lining to this silver cloud, the numbers can oblige: Building permits, manufacturing orders and help wanted advertising all declined in the latest Economic Index. All three of those stats are considered “leading indicators” of where the economy might be headed. Home sales also dropped, though that sector in particular is prone to dramatic month-to-month fluctuations.

As Professor Eschker himself has told this reporter on numerous occasions, it’s not the monthly data so much as the trends that tell the more accurate story. And Humboldt County’s story has been pretty good recently.