LoCO ON THE POT: Gavin Does Legalization in Garberville 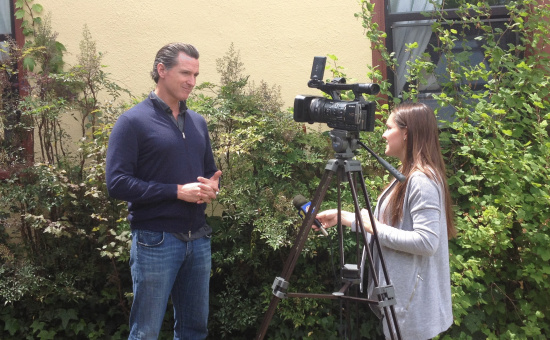 The tiny town of Garberville was a zoo on Friday, traffic was steady, parking was tight. Hella people were out and about, from sun-kissed SoHum fashionistas to old gray haired hippies, from cute and carefree kids to grow bros and less put-together types…

It was definitely a busy day. The farmers market did its thing on the the Town Square, which is always a welcome sight. The Southern Humboldt County Technical Rescue Team had a BBQ fundraiser on the square too. The Mateel’s Summer Arts and Music Festival is happening on Saturday and Sunday in Benbow, and town is abuzz with talk of that. SoHum is bustling.

But the real crowd-draw in Garberville on Friday was the Public Forum on Marijuana Policy with Lieutenant Governor Gavin Newsom. Congressman Jared Huffman called the forum, which was was billed as an invitation “to discuss the unique public policy challenges related to marijuana legalization affecting California’s North Coast.” Lost Coast Outpost posted the news last Tuesday. 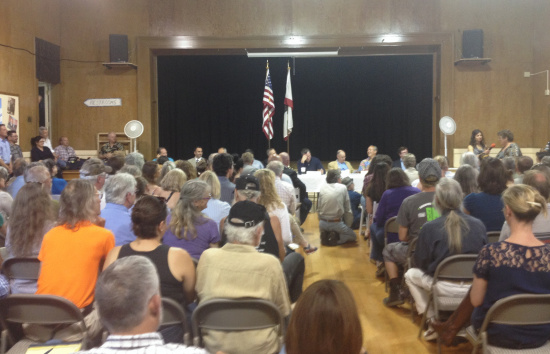 The forum was held at the Garberville College of the Redwoods Campus, or The Redwood Playhouse, the community theater on Sprowl Creek Road by the freeway. I don’t often attend cannabis forums and meetings — I prefer to discuss weed politics in more relaxed, informal settings, such as a VIP dab lounge or a full-sun outdoor garden with a view. But who could pass up on seeing our most handsome public official Gavin Newsom talking weed in Garberville? Not me. I don’t think anyone even remotely interested in Emerald Triangle cannabis issues passed this opportunity up. 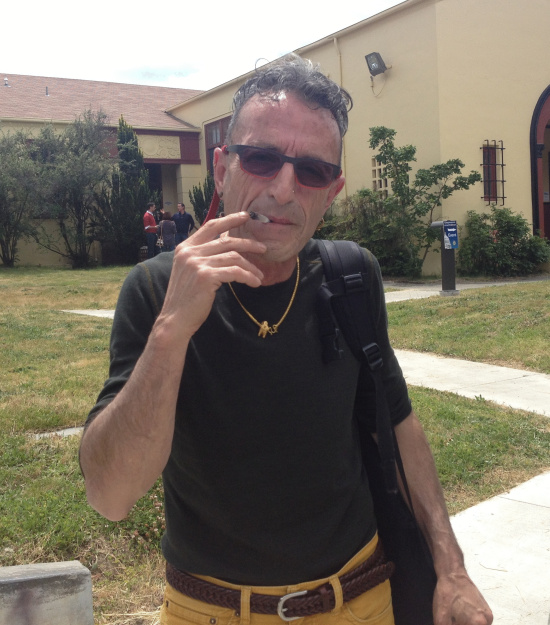 Frenchy Cannoli in front of the playhouse.

So I moseyed over to the playhouse on Friday afternoon, and I ran into Frenchy Cannoli on the way. He is the official “Hashishin” for Aficionado Seeds. Dude was puffin’ away on a phatty as we walked across the freeway bridge on Sprowel Creek. Frency’s Instagram feed features flashy photos of the pressed water hash he is known for crafting. About a day ago he posted the flier for the forum. His caption read: “We need as many people in the audience as possible. Help protect the Emerald Triangle”

A great many people did show up for the forum, which was scheduled to run from 1-2:30 p.m. I arrived right before 1 p.m., just in time to get a photo of Lt. Governor Newsom being interviewed outside of the playhouse. Inside of the playhouse, it was busy, busy. All of the seats were taken and it was standing room only in the back.

A big black curtain divided the front of the room, which had seats, from the back third of the room, which had no seats. The curtain was sort of lifted halfway in places, but not uniformly, so much of the view was blocked. Plus, the panel was not set up on the stage — the experts were set up at floor level, with everyone else.

I wound up squished on a couch in the back of the room along with the proprietor of Space Gem Candy, a Humboldt County-based line of edibles, plus two other people. We were hot and we couldn’t see shit. I could have gotten a seat with a better view if I had arrived earlier. But hey, I assumed “Humboldt time,” and that just didn’t work out for me. It happens.

The forum started promptly at one when Congressman Huffman introduced the all-male panel which featured Newsom and members of his Blue Ribbon Commission on Marijuana Policy, including former Humboldt County District Attorney Paul Gallegos. Luke Bruner, treasurer of California Cannabis Voice Humboldt, Assemblyman Jim Wood and Humboldt County Sheriff Mike Downey were at the table too.

I couldn’t see the gentlemen on the panel, but I did see all sorts of local cannabis personalities in the crowd, like Emerald Growers Association Executive Director Hezekiah Allen sporting a slick suit. Kym Kemp was there getting the scoop for her dedicated fan base. Kim Sallaway was taking photos. Adrian Baumann from Willits News looked like he was scoring some serious interviews.

Leo Stone was reppin’ Aficionado Seeds in his usual all-black attire. Tim and Taylor Blake from Healing Harvest Farms and Emerald Cup fame hung out in the back near our couch crew. Kellie Butterfield Dodds from the Cannabis Film Festival was there, so was Rachel from Baked in Humboldt, Craig from Satori Movement, event promoter Yvonne Hendrix, California Cannabis Voice Executive Director Richard Marks and my homey Lennon.

Each panel member got on the mic to make a brief statement, and straight away, Lt. Governor Newsom made a crack like, if you haven’t been up to Humboldt, you don’t know anything… That brought cheers and applause. State Assemblymen Jim Wood threw out talk of bills, environmental challenges and potential solutions, frameworks around medical marijuana that can transition easily when legalization comes, stakeholders… That whole spiel.

Panel member Keith Humphries is a professor of psychiatry at Stanford and he’s on Newsom’s blue ribbon commission. “Your input is absolutely crucial,” he told the crowed. Gallegos, introduced himself by saying he’s “moonlighting on the Blue Ribbon Commission lately.” He greased the crowd by saying, we are on “ground zero” here.

Sheriff Downey said the problem is that legislature does not want to engage in this issue. He asked, How can we go 19 years like this…? There has to be some type of legislation. Downey hopes for definition. The environmentalist on the panel said he wants to see trespass grows restored back to their former “pristine” habitat, and he’s not down with egregious, clandestine acts. John Corbett, the chair of the North Coast Regional Water Quality Control Board talked of water quality regs, of course.

Once everyone on the panel was introduced, audience members were invited to make comments and ask questions, so one-by-one, folks started to address the panel. Basically the format was like this: People would state their questions and comments, and Newsom would either answer them right away or he would wait for a couple questions to build up before he made comments. The other panel members would chime in here and there too. All I could see was backsides, but I could hear OK.

It all started with one audience member asking about issues around transporting cannabis. Then another lambasted the panel for using the word “marijuana,” which everyone knows is a racist relic that must be abandoned immediately. Local activist Robert Sutherland, got on the mic for a few minutes. And so did some dude from the Church of Jesus Christ and the Latter Day saints. That’s when the chick next to me said, “They had to shut this guy down at the last community meeting I went to.”

At this point, I started to catch whiffs of cannabis smoke wafting in through the open back door of the theater. People were going in and out and some of them were sweaty. It was hot in there. One guy approached the sheriff at the back of the room to complain about the silly black curtain dividing the room, to no avail. I showed my sweet photo of Gavin being interviewed to the ladies next to me. They swooned.

There was a great deal of hooting and hollering when one fellow spoke against the idea of a limited number of permits for cannabis producers in the state… “There are 4000 or more outdoor gardens in this county.” There were more hoots and cheers from the crowd when he said cannabis is just agriculture.

When Frenchy Cannoli had the mic, he told the panel that we have to protect the unique land and people here. He thinks the weed from this area can compete the world over. Beth Allen, the owner of Amillia’s restaurant in Garberville, asked the panel, “How are you going to protect us as patients, as growers, as business people…?” One guy ranted about how dangerous he thinks edibles are. “We have to think about the children… The children must be protected,” he said. “I think edibles ought to be locked up…”

Casey O’Neill from HappyDay Farm and Emerald Grown kept it real. He was basically like, hey, I participate in a whole legal framework when it comes to HappyDay producing food for market… What’s the hold up on incorporating cannabis into this whole agricultural framework? The crowd liked that.

Daryll Cherney spoke too. Cannabis has a culture to it, he said, there’s songs, there’s clothing, language… “This is a cultural phenomenon, not just a cannabis phenomenon…” Another guy that spoke declared himself a “BRC” groupie. His question was: “How is legalizing marijuana going to help the children of East Oakland?” Then he said, “marijuana is spiritual.” Then he got all into a anti-weed candy speech. Did I mention it was hot in there?

But Gav totally gets it, he gets all of it. This guy knows what’s up. He smoothly responded to everything, to the more bizarre concerns, to the environmental concerns, to the emotional appeals. He is slick forever — a total crowd pleaser.

Just after 2 o’clock, I stepped outside and smoked a joint of some Ringo Sour Diesel Skunk #1 Blue Dream with Pearl Moon, co-founder of 707 Cannabis College and The Bud Sisters. I made it back into the forum just in time to hear Wendy from Space Gem Candy defend edibles. Wendy should defend edibles — her medicinal candies and elixers are supreme.

She was the second-to-last audience member to address the panel. The forum ended promptly at 2:30. The crowd dispersed and some people lingered near the front of the playhouse to try and get pics with Newsom. I like that the forum ended on time, and I’d say it was a success, in that Newsom and his crew got to see a legit Emerald Triangle turnout, complete with all manner of community members, including local cannabis business folks, farmers and media. And lots of audience members were able make powerful points.

But there was a silliness to this town hall meeting too. The venue had limited seating and bad feng shui. So many people had things to say to the panel, yet there was only 90 minutes and everyone was rushed. Some people did not get a chance to speak. Emerald Triangle folks have a whole hell of a lot to say to Lt. Governor Newsom and his BRC about cannabis.

Maybe there should be a series of Emerald Triangle forums with the BRC? It was far from a genuine “discussion.” Newsom is definitely hanging with local cannabis people outside of this forum, so that’s good… I just hope he gets hooked up with some high quality Emerald Triangle cannabis products to show off back in Sac. 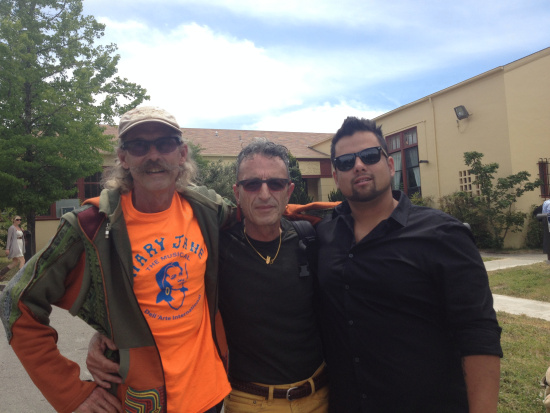