A very happy reunion this morning! 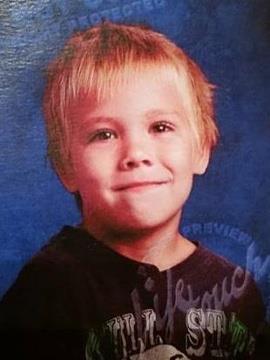 On 10-20-2015 at 7:04 PM the Mendocino County Sheriff’s Office was dispatched to a reported missing child from a residence located in the 27000 block of Fox Road in Willits, California. The residence was located in a remote rural portion of the Brooktrails subdivision.

Upon arrival deputies learned Brett Paul Brown, 5-years-old, left the family residence at 4:30 PM indicating he was “going on a field trip”.

Brett was last seen by a sibling walking uphill in a southwestern direction into a heavily wooded area adjacent to the family’s residence. Brett was with the family’s dog “Tank” described as being a 5 year-old black Labrador retriever wearing an orange collar.

Deputies began an immediate search of the area with the assistance of personnel from the Brooktrails Fire Department and Mendocino County Search and Rescue.

During this time a reverse 911 notification call was sent out to the surrounding areas near where Brett was last seen.

On 10-21-2015 at approximately 7:55 AM search teams found Brett in a heavily wooded area approximately 2 miles from his family’s residence. Brett was alive and appeared to be in good health.

The Mendocino County Sheriff’s Office would like to thank all the personnel and public safety agencies that assisted in the search operation.