What’s the Story With That Place? From Eagles Hall to Squires HQ at Eureka’s Lloyd Building 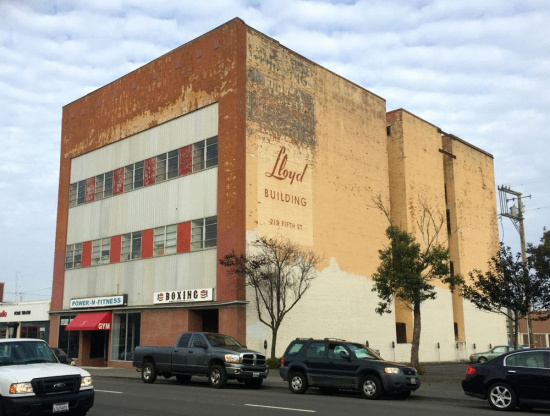 Construction of the Lloyd Building was completed in 1915. Photo by Ryan Burns.

Note: This is the third of the Outpost‘s occasional series “What’s the Story With That Place?” In July 2014 we looked at the crumbling church on the corner of Wabash and Union streets in Eureka, and last December we looked at a former lumber company development turned ghost town near Big Lagoon. If you’re curious about some place in Humboldt County, send your suggestions for future entries in this series to ryan@lostcoastoutpost.com.

For many locals, Eureka’s Lloyd Building, on Fifth between C and D streets, offers a chance to impress newcomers and visitors with a mildly interesting little anecdote: The “Lloyd” in question, we say, gesturing up at the name painted in elegant cursive on the eastern brick wall, is Lloyd Bridges, the late actor. You know, the guy who uttered the immortal line in Airplane!, “Looks like I picked the wrong week to quit sniffin’ glue.” He’s also the father of movie stars Beau and Jeff Bridges.

Lloyd V. Bridges Sr. was a hotel and real estate owner, and after buying the three-story brick edifice in 1949 he rechristened it after his eldest son, Lloyd, Jr. 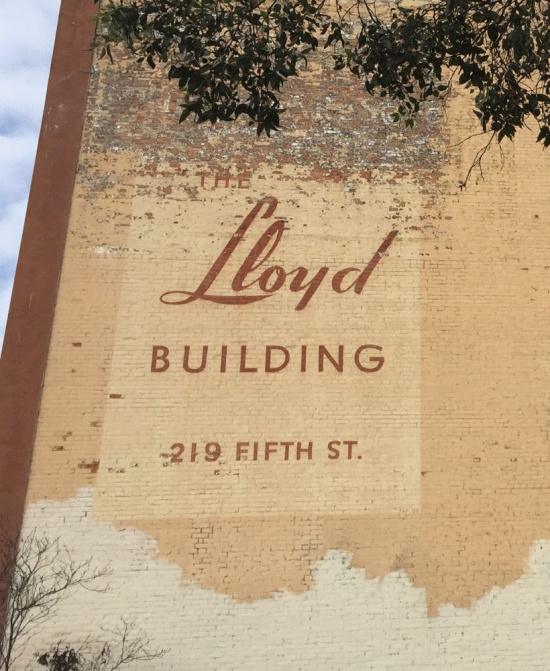 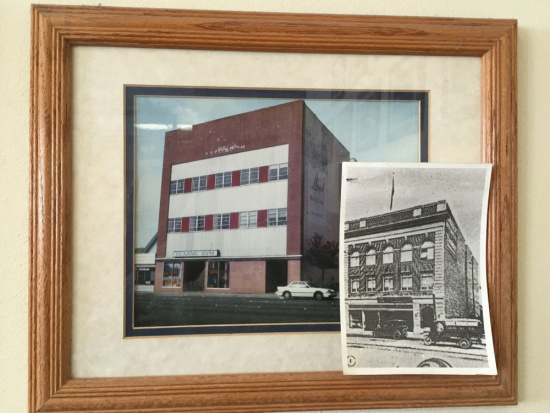 That’s usually the end of the anecdote. But the building, which turned 100 this year, has a rich history, and when you track that history from then to now you get a time-lapse view of Eureka and its inhabitants over the last century, from the lavish soirees of wealthy lumbermen a hundred years back through renovations, earthquakes and dramatic shifts in culture and economy, eventually landing at what the building is today: the structurally suspect home of a fitness gym, a boxing gym, a handful of business tenants and, seated behind a desk in a second-floor corner office, Eureka’s most notorious landlord.

Floyd Squires, who owns dozens of properties in Eureka with his wife Betty, is sitting in the headquarters of his property management company, Humboldt Bay Properties, talking to a prospective tenant. Clad in a black T-shirt and hunched in a chair across from Squires, the young man is probably unaware that the City of Eureka has an ongoing lawsuit against the Squireses for maintaining “substandard and dilapidated conditions” and basically operating like “slumlords” in more than two dozen properties — including the Lloyd Building.

Squires, 70-ish with white hair and beard, tells the man across from him that he recently had to evict one of his tenants, and he has several rentals available.

“I’ll call your references and give you a call,” Squires says.

The young man thanks him and stands up to leave. Hanging on the wall behind him is a framed and matted picture of the Lloyd Building, and taped to the glass in the lower righthand corner of the frame is a smaller picture, reproduced on office paper, of the Lloyd Building as it looked roughly eighty years old.

The earlier incarnation of the building is far more handsome, with a row of arched windows in the stone-and-brick facade and, up top, a flagpole standing tall behind a decorative parapet. 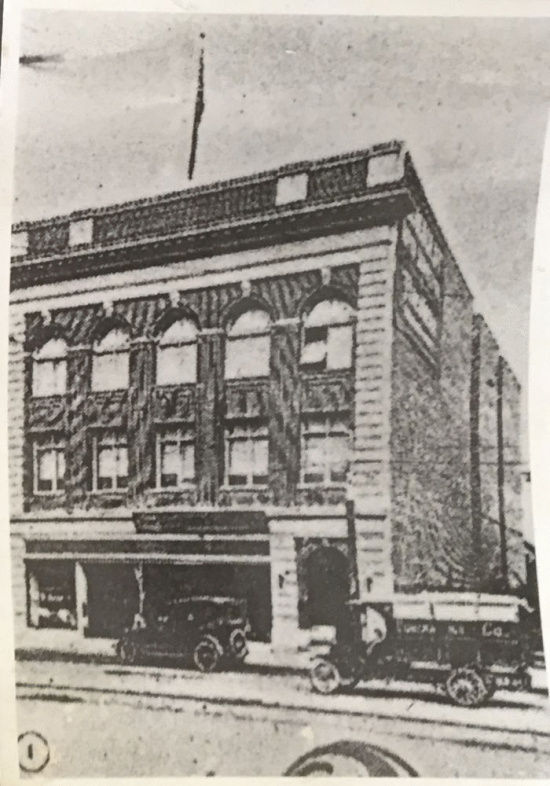 Construction on the building began with much fanfare in August 1912, when the Eureka Aerie (or lodge) of the Fraternal Order of Eagles held a ceremony for the laying of the cornerstone. The Eagles had been founded nearly 15 years earlier by a group of Seattle theater owners, though the local aerie was predominantly lumbermen.

A 1912 newspaper item on the cornerstone ceremony declared, “Eureka Aerie of Fraternal Order of Eagles will mark the greatest event in its history tomorrow afternoon when the corner stone of the new Eagles building on Fifth Street will be laid.”

Eagles members placed a variety of items into the cornerstone, including copies of the three daily newspapers Eureka boasted at the time. Construction of the Eagles Hall was completed in 1915, and soon the organization was hosting major social events such as the annual Welfare Dinner of the Pacific Logging Conference.

The lead-up to the big dinner, as recounted in the November 1915 issue of a Portland, Ore., industry publication called The Timberman is worth reproducing here:

The business section of Eureka was visited and next followed an exhilarating four-hour ride over the magnificent country roads of Humboldt county until they reached the Pacific Ocean where the white cross on Trinidad Head shone bright in the glorious afternoon sun.

On the return trip a stop was made for refreshments at the Hotel Arcata, the modern, up-to-date hotelry of which this city is so justly proud.

The party reached Eureka with eyes brightened, cheeks aglow and appetites whetted in time to enjoy a short rest and enjoy the elaborate banquet served them at the Vance Hotel at seven o’clock. Covers were laid for thirty on a table prettily decorated with roses and ferns.

In speaking of the banquet one lady remarked, ‘It was perfect. We had good things to eat. Every woman loves a regular lady’s dinner with salad, ices and ice cream.’ During this same hour the men were enjoying their annual banquet at the Eagles Hall which could not by any stretch of imagination be called ladylike.

The manly revelry took place just over 100 years ago — Oct. 23, 1915 — evidently without alcohol consumption. A member of the Women’s Christian Temperance Union was invited and, according to the Lumber World Review, “she did talk beautifully and convincingly of the absolute necessity of divorcing the best grade of work and the highest type of manhood from the use of intoxicating liquors.”

Still, the lumbermen managed to have such a good time that, “when the banquet was at its height and the joy of fellowship flowed swiftly, it was proposed in a group of kindred spirits that they should sign an agreement to attend the next logging conference wherever held.”

The next year’s conference was held in Gray’s Harbor, Wash., but the Eagles Hall continued to thrive. By 1919, Fifth Street was bustling with automobile-related businesses. Take a look at this photo from Lynette Mullen’s invaluable NorCal history blog. Click on the image a couple of times to get the full resolution and check out the sign in the upper right corner declaring, “This is 219 5th Street.”

Fast-forward, now, to the 1940s. Below is an aerial photo of downtown Eureka in 1947, located with help from the fine folks at HSU’s Humboldt Room. (Do explore there if you get the opportunity.) 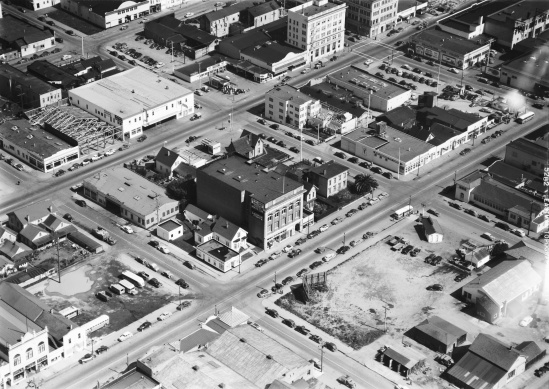 Dead center is the Lloyd Building, though at the time it was simply called the 219 5th Street Building. An enlargement, below, shows that it still had its original facade and hosted a health club and something called The Surplus Store: 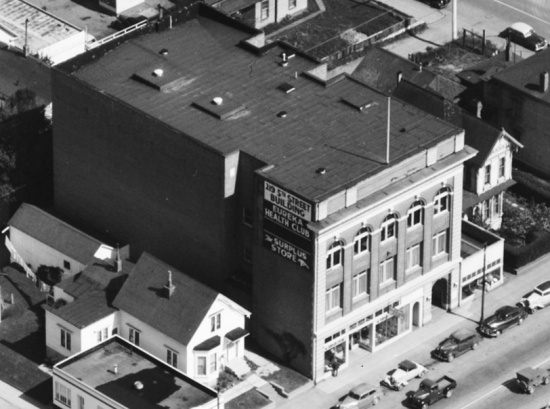 Here’s a link to the photo. Click through for the full resolution and look for the massive original Bon Boniere building, among other curiosities.

Born in Wichita, Kan., in 1887, Lloyd V. Bridges, Sr., moved to Eureka with his brother-in-law to start a beverage distribution company, and by the early 1930s Bridges emerged as a major commercial property investor. He co-owned and operated the Vance Hotel with his mother, and shortly before his death he bought the Lauff Hotel in Crescent City, renaming it the Surf Hotel. (Still the city’s tallest building, it’s now a senior-living apartment complex.)

The Bridges lived on the corner of Dolbeer and Chester streets in Eureka and had a summer home on the Klamath River. Before going on to stardom on stage and screen, Lloyd Jr. graduated from Eureka High School in 1931.

The senior Bridges’ death of a sudden stroke was announced in large font across the top of the Humboldt Standard on May 1, 1962. He was described as an avid sportsman (and Humboldt Crabs fan) and active member of the Masons, the Shriners, the Elks, the Lions, the Chamber of Commerce and the Ingomar Club.

Northwest Properties, Inc., a company founded by Bridges, Sr., owned the Lloyd Building until 1974, according to records at the Humboldt County Recorder’s Office. The County of Humboldt leased the building in its entirety for a couple years starting in 1972. The lease was $2,250, which seams a bit high given the option to purchase the entire thing for $110,000.

In 1974 the Lloyd Building was sold to a couple named Charles and Louise Emrick, and five years later, in 1979, it was sold again to the Aardvark Development Company, owned by Floyd Squires, III. 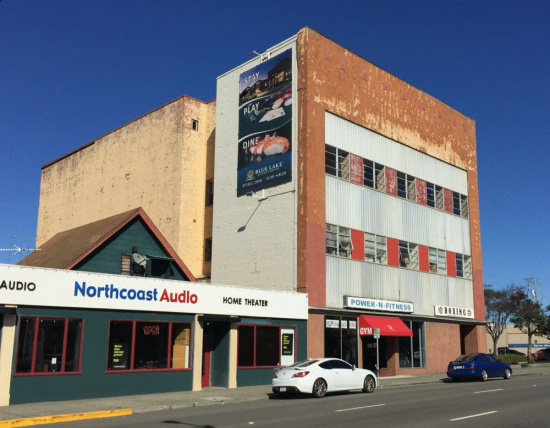 The Lloyd Building today is showing its age. Mismatched swaths of flaking paint cover the exterior, and the elegant stone facade with its arched windows has been replaced by a large grid with slatted wood siding and levered windows. The Power-N-Fitness gym is on the ground floor along with an entrance to the dim and dingy lobby at the east end.

According to the directory sign inside the lobby, this is now “Betty’s Building,” and its tenants include a boxing gym, an attorney and Squires, whose two property management companies are managed from his second-floor office. 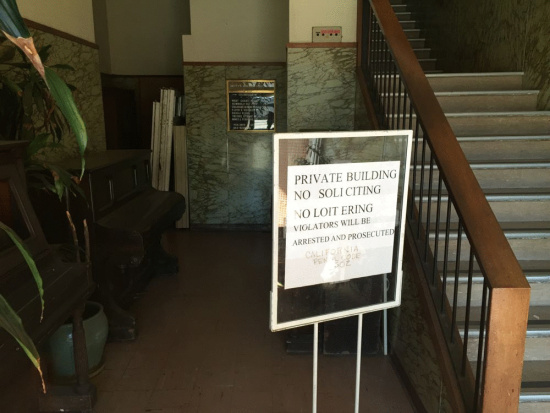 Three old stand-up pianos sit in the lobby of the Lloyd Building, aka Betty’s Building.

After the prospective tenant leaves, the Outpost sits down with Squires to talk about the history of the building. He affirms that it was built by the Eagles in 1915 and says it was Bridges who put the current face on the building.

Squires quickly shifts to what’s going on now. “We’ve completed about 60 or 65 percent of the upgrades,” he says. “We reinforced all the parapet walls; we put new strengthening all across the front of the building. We’ve spent about, oh, $150,000 on just upgrades for just seismic stuff so far.”

Like several other unreinforced masonry buildings in Eureka, the Lloyd Building suffered damage during the 6.5 magnitude earthquake that struck off the Humboldt County Coast on Jan. 9, 2010. You can see pictures here showing that the upper parapet pulled away from the building but did not crumble.

“We’ve still got a little separation in one corner up here, which we’ve got to screw it back in place a little bit,” he says, “but it’s not hazardous. It’s been inspected [and] approved by a structural engineer.” 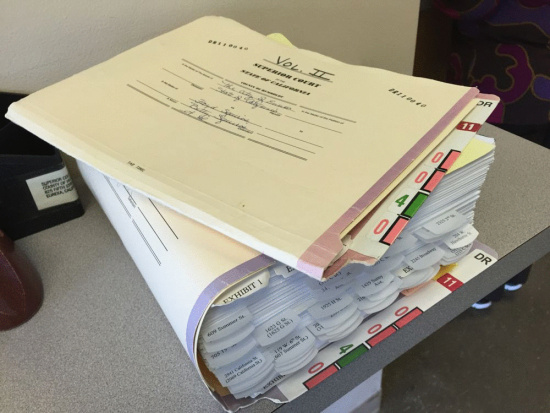 Two of eight files in the City of Eureka’s case against Floyd and Betty Squires.

City officials beg to differ. It’s been nearly five years since the City filed suit against the Squireses, and there have been many ups and downs, which we won’t rehash here. There are eight files for the case at the county courthouse, at least one of which is as thick as an L.A. phonebook. Humboldt County Superior Court Judge Dale Reinholtsen is expected to issue a ruling soon.

Regarding the Lloyd Building specifically, the county alleged, among other things, that it was not structurally sound, and in an interview last week Eureka’s Chief Building Official Brian Gerving said that’s still the case.

“The City still views the Lloyd Building as a significant hazard in the event of an earthquake, as with other unreinforced masonry buildings in city,” Gerving said. “It’s a priority for us to make sure those are upgraded and make them as safe as possible for occupants and passersby.”

“We’ve got a couple small cracks in it, but our structural engineer, he says, ‘You’ve got one of the best-built buildings in Eureka,’” Squires says.

Perhaps it will last another hundred years.