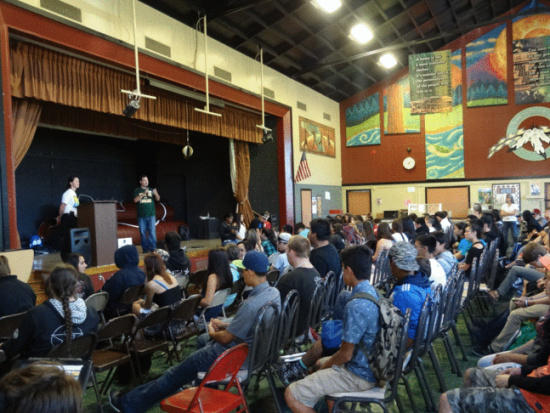 When the Klamath-Trinity Joint Unified School District asked Judge Richard Blake to speak at the graduation ceremony at Hoopa Valley High, the district’s high school, he accepted the invitation under one condition.

“My commitment to them,” said Blake, chief judge of the Hoopa Valley Tribal Court, in an interview with The Chronicle of Social Change, “is when they can get 75 percent of their incoming freshmen to graduation, I will speak. I have been judge for 14 years, and that has yet to happen.”

Through the Keeping Kids in School and Out of Courts initiative (KKIS), Blake and a team from the school district, social services and probation are working to get more students across that graduation stage, beginning with reducing the number of them who are referred to his courtroom for truancy or behavioral issues.

Launched by California Chief Justice Tani G. Cantil-Sakauye in 2013, KKIS fosters collaborative relationships between state and tribal courts and school systems to support K-12 students in staying in school through graduation and not entering the court system. Blake sits on the KKIS steering committee.

Blake also presides over the tribal court on the Hoopa Valley Reservation, which has jurisdiction to hear cases arising under the constitution or statute of the 3,600-member Hoopa Valley tribe, to which he belongs.

Hoopa Valley High and three other schools in the Klamath-Trinity district, which has about 1,000 students, are located within the boundaries of the Hoopa Valley Reservation. While the majority of the students in the district are members of the Hoopa tribe, all students who are referred to court for attendance or behavioral problems by the schools on the reservation are sent to the tribal court.

When he arrived in Hoopa in 2002, Blake said, he was disheartened to learn that more than half of the students entering Hoopa Valley High did not make it to graduation. To earn that diploma, students need to be in school yet the Klamath-Trinity district had a 48 percent truancy rate in 2013-14, with a 78 percent truancy rate at the high school. (The truancy rate in California is 31 percent, similar to the 32 percent rate in Humboldt County overall.)

Blake saw students in his courtroom who had been placed in alternative school settings due to attendance or behavioral problems, where they were only required to attend school a few hours per day, some even just one hour per day.

“Their education needs weren’t being met, and even more so if they had a current IEP [Individualized Education Program],” he said. “So they had all this other time to get themselves into the delinquency system as opposed to a truancy setting. So we were increasing the odds that they would end up in a court system, whether it be tribal or state.”

Over time he noticed a pattern: Most of those students never made it back into a regular classroom setting, and many dropped out.

“We had to find a way to work with the school district that would keep these kids in the school and not in our court system,” Blake said.

So when his jurisdiction was given the opportunity to participate in KKIS, Blake eagerly signed on.

The idea that would eventually turn the tide on the district’s high rate of court referrals came from the student representatives at that meeting.

According to Blake, he and the other adults in the meeting were surprised by the students’ request for a resource officer on campus they could approach when a problem arose.

“We were amazed,” Blake said. “We thought that was the last thing in the world they would want – a law enforcement-type position on campus that ultimately could make a referral to the court system if necessary.

“They [the students] felt that if the school district could provide an atmosphere that felt safe for them…it could eliminate that school-to-court pipeline,” Blake said.

So the superintendent of schools took the idea to the school board, which committed to hiring a resource officer to serve all of the Klamath-Trinity school campuses, most of which are within walking distance of one another. Within six weeks of that meeting, the school district had hired Will Hostler, a member of the Hoopa tribe and a trained police officer with 19 years’ experience in law enforcement.

While the school district directly hired Hostler, the tribal court partnered with the district to make the position an officer of the court.

Hostler received training from the school district before beginning his job as Chief of School Safety, and he says the job is much different from his previous work as a police officer, including his attire.

“Most days I’m in jeans and the school sweatshirt,” Hostler said in an interview with The Chronicle. As Chief of School Safety, Hostler said, he is “more of a mentor or counselor” to the students. He also coaches the JV football and softball teams, a role he says goes well with his other job on the campuses.

“He has done a phenomenal job,” Blake said. “If there’s an issue at school, he is the first line of defense in working with the students before they’re ever referred to probation…keeping those kids out of that track to the court system.”

To prevent a child with truancy or behavioral issues being sent to the School Attendance Review Board, which could lead to a referral to the district attorney’s office and/or probation, Hostler steps in to work with the student individually, and often makes informal contact with the family, referring them to resources to support their child’s school attendance or address behavioral concerns.

“So there’s no longer any need to involve a justice agency, whether it’s probation or the courts,” Blake said.

When a problem arises, Hostler looks behind the behavior.

“There’s a reason why they’re cutting this class,” he said. “Maybe they have a learning disability. Maybe we need to get them some counseling… . Before, when kids cut class, they’d be given detention or suspended. Now we’re getting to the root of the problem.”

And getting to the root of the problem is exactly what Blake and the rest of the KKIS team are aiming to do.

According to Blake, the high school made over 75 referrals to his court during the 2013-14 school year, and that number dropped to 23 in 2015 after Hostler was brought on board. In 2016, there have been only two referrals so far.

Noting the team effort required to make these changes, Hostler said, “We’re trying to get back to our old ways of culture on the reservation: It take a village to raise children.”

In addition to intervening when students need support, Hostler says part of his job is keeping other influences, such as drugs and alcohol, off the campuses.

“We tell them: ‘That’s not part of our culture,’” Hostler said. “In our tribe, we believe you must live your life pure. … If something goes on in our lives, we don’t resort to the bottle, the pill, the needle. We have other ways to deal with things. So that’s what we’re trying to do as a village, to help people.”

Encouraged by the downward trend of referrals to his court, Blake is hopeful that he’ll be able to honor his commitment to speak at the high school graduation before his tenure as chief judge ends in 2018.

Meanwhile, he speaks about the effort to other jurisdictions whenever he can.

“We want to let the nation know what the Hoopa Valley Tribe is doing to keep these kids out of our court system,” Blake said. In February, he spoke about the KKIS work at a Capitol Hill briefing hosted by the National Council of Juvenile and Family Court Judges.

“I want better for our tribal youth,” Blake said. “I want their self-esteem to be built by knowing that if they want to attend a four-year university, they can. If they want to work in law enforcement or the military or a job that requires a background clearance, they can. I don’t want these youth to be denied that ability based on something as simple as contact with a court system while they should have been in school.”

Blake, the current president of the National American Indian Court Judges Association, washonored in February by the Judicial Council of California for his work on the Tribal Court-State Court Forum, which addresses issues of mutual concern such as jurisdiction, information sharing and judicial education. The forum was launched in 2010 after Blake proposed the idea in a letter to then Chief Justice Ronald George.

“Seeing the smiling faces of my tribal community,” Blake said. “I recognize that I want to make a difference for the future of these people, and keep them out of the system because it’s very, very easy to get yourself into a court system and hard to get yourself out.”

Note: This story was originally published in The Chronicle of Social Change. See original here.