« (PHOTO) Who or What Was Spinning Sky Donuts Above Humboldt This Morning?

YOUR WEEK IN OCEAN: Go Look at Gray Whales (But Don’t Disturb the Snowy Plover) »

Humboldt County is approaching the second fiscal year of getting to spend revenues from the voter-approved half-percent sales tax, Measure Z. After the measure passed, the Board of Supervisors formed a citizens advisory committee tasked with reviewing all the applications for funding and suggesting to the supes which ones to choose, and how much to give them.

The board is not bound to follow the committee’s recommendations, though it did so last year. Below is a press release from the committee explaining this year’s suggestions:

The Citizens’ Advisory Committee on Measure Z Expenditures this week finalized its recommendations for projects to be funded in Fiscal Year 2016-17. In total, the committee recommended 13 new projects to be funded, in addition to projects from last year that require on-going funding. The final recommendations will be included into the county’s proposed budget, which will be presented to the Board of Supervisors on June 7.

The committee is recommending $6.59 million in expenditures, including $2.2 million to the Humboldt County Fire Chief’s Association for equipment; $1.5 million to the Department of Public Works for roads resurfacing; and $1.2 million to the Sheriff’s Office for seven positions and a rescue and recovery vehicle, among others.

It is expected that $5.93 million in Measure Z funding will be available next year. While the tax is expected to raise $9.86 million, there is an ongoing cost of $5.16 million due to projects that were funded last year, like hiring Sheriff Deputies, Deputy District Attorneys and Probation Officers. In addition, roughly $1.23 million in one-time funding was rolled over to FY 16-17, adding to the available funding.

The committee made its recommendations realizing that the total expenditure amount will need to be trimmed in order to balance with projected revenue. County staff will seek direction from the Board during the Third Quarter Budget Report on May 3 on how to balance the Measure Z budget.

In total, agencies submitted 43 applications requesting more than $12.5 million in funding. The committee held six meetings, including one public hearing, in which it took public input and evaluated proposals that sought a share of these funds. 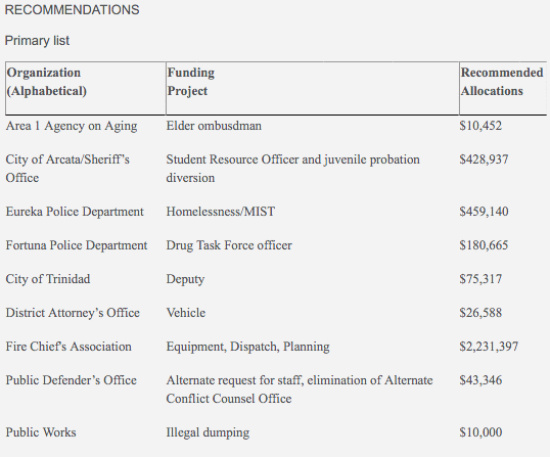 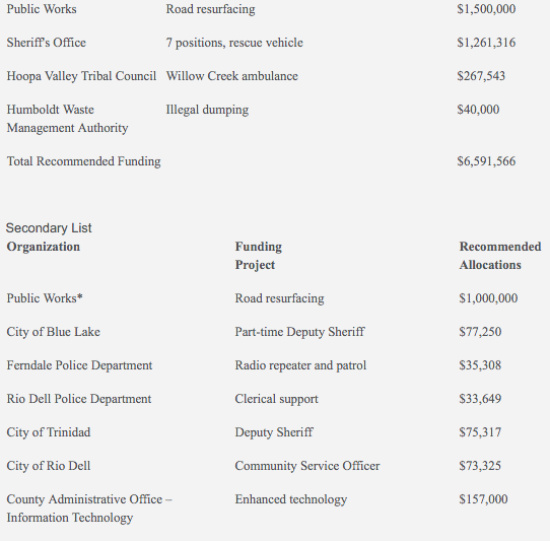 To see the full breakdown of proposals and all of the applications, view the Measure Z web page.