Forward progress of the fire stopped on the #StaffordFire. Fire at 35 acres and heavy mop up. Days of work ahead. 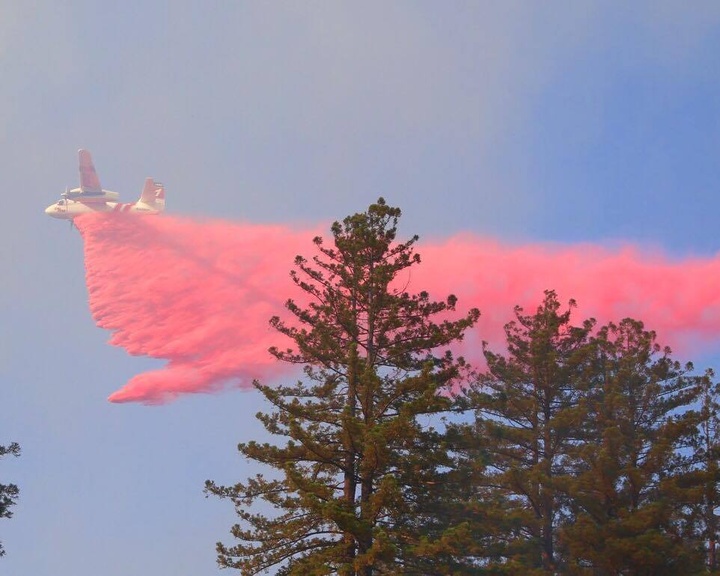 “[We’re] just getting hammered by the wind,” Renner said.

Eight separate fire agencies are working the fire at the moment, with more resources on the way. 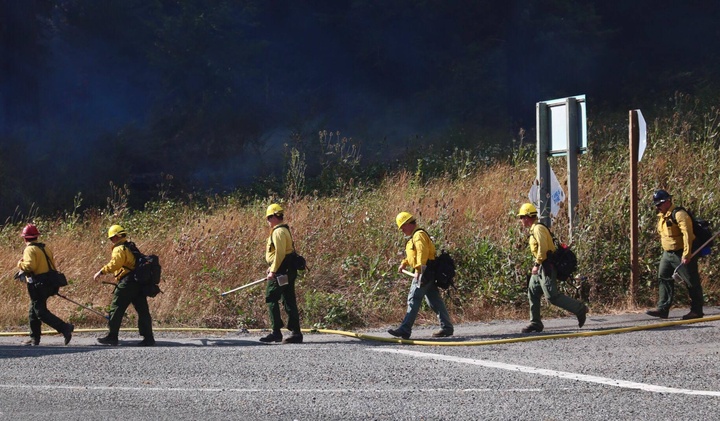 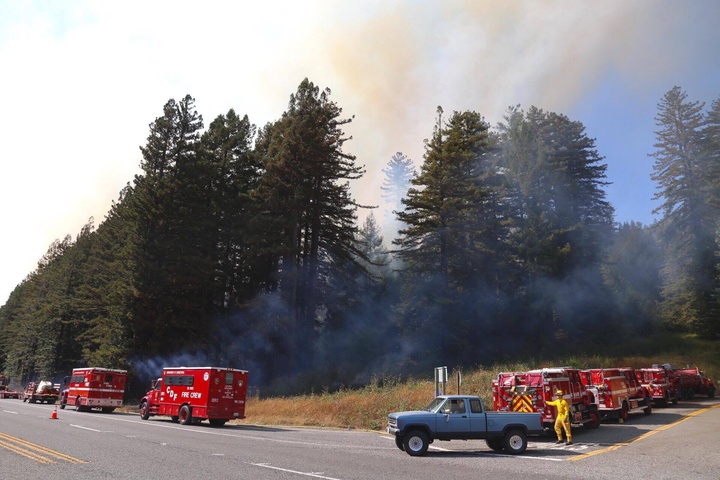 Renner said that the fire is holding at 10 acres with a slow rate of spread. He estimates that the fire will be contained by 12 p.m.

Traffic is still slow, but moving.

UPDATE, 4:26 p.m.: Estimates of the size of the fire, and the size it could grow to, seem to vary pretty widely depending on which air personnel or ground personnel happen to be looking at it. We’ve heard evera current size of aything from 5 acres to 10 acres to 20 acres — 10, most recently.

Video from reader Jennifer Leon, driving through the fire:

Video of helicopter making a drop, plus traffic, by Andrew Goff: 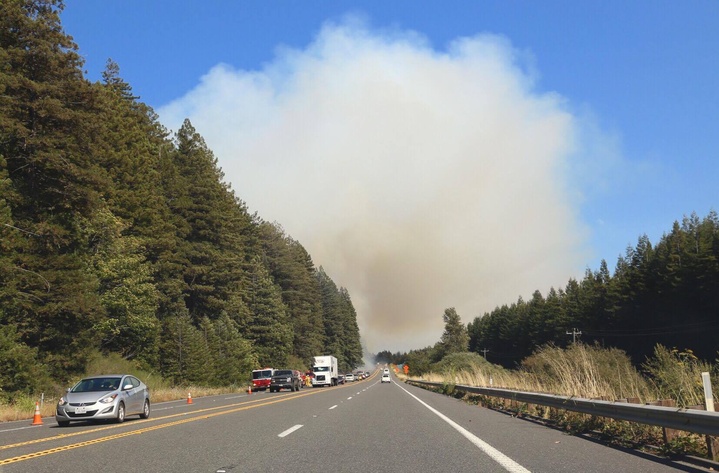 UPDATE, 4:10 p.m.: Tankers are bombing the fire from the sky, reports the Outpost’s Andrew Goff, on scene. Two helicopters are also working the fire, dipping into the river and hauling water back to dump on it. Ground crews are working their way upslope with chain saws.

UPDATE: The northbound #2 (right-most) lane of U.S. Highway 101 near Scotia in Humboldt County has been closed to traffic. Southbound lanes are flowing. Expect delays and potential low visibility as you travel through the area.

UPDATE, 3:56 p.m. Traffic is currently moving in both directions. A lot of smoke. 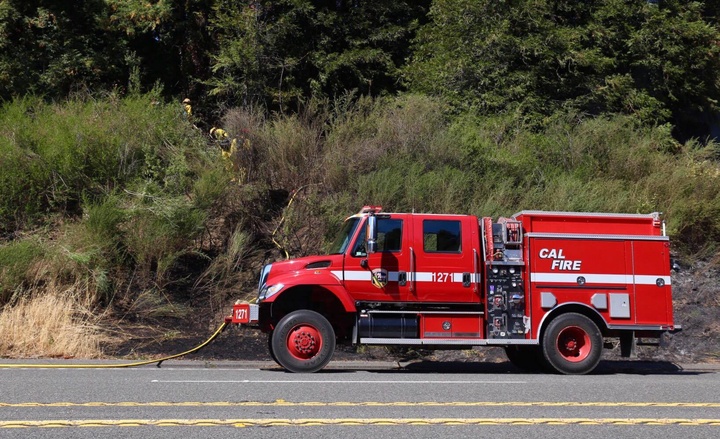 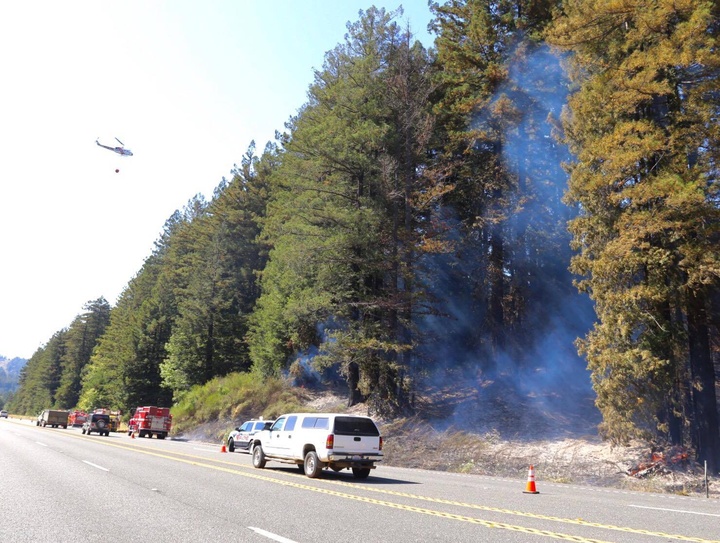 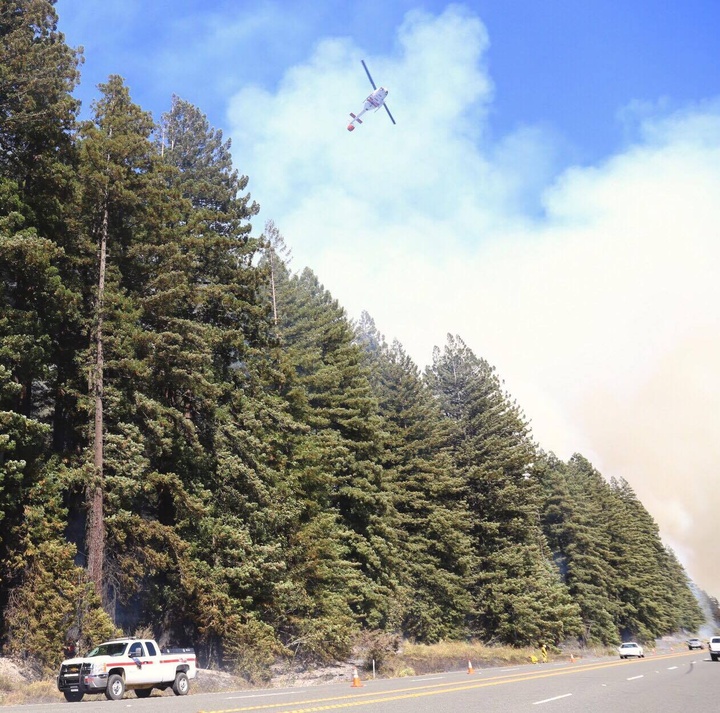 UPDATE, 3:30 p.m.: A firefighter on-scene describes “a mile of fire” along southbound 101 north of the Stafford Bridge. He says it’s burning in timber understory, and he estimates it has the potential to spread to as many as 100 acres.

UPDATE, 3:15 p.m.: Scanner traffic now estimates that the fire has grown to 20-25 acres with a high potential to spread. They are requesting a full shutdown of Highway 101.

LoCO readers and scanner traffic report that multiple fires have broken out along the side of Highway 101 near the south Scotia exit. Firefighters at the scene estimates that the largest fire is about an acre in size and is spreading with moderate speed through low vegetation and heavy timber.

“It could go big, here,” a firefighter at the scene said over the scanner.

Caltrans has been summoned to the scene to provide traffic control. The fires are being referred to as the Stafford Incident.