Woman Trapped in Car After Collision in Eureka »

City of Eureka Launches 14-Part Series, ‘Get to Know a Zone District,’ and It Is Pretty Fantastic

Question: Have you always wondered what Eureka’s RM-2500 zone is all about?

Answer: Of course you have!

Who on God’s green Earth would possibly know about such things?

So, I read the headline up there. Did staff really launch a 14-part series explaining how each zone in the City works?

Well, this month’s Eureka E-Newsletter did indeed introduce a 14-part series. It’s called “Get to Know a Zone District.” But the City actually has 21 different zone districts!

Weird! Which ones are gonna be left out?

We have no idea!

Well, I would very much like to read the first installment. May I? 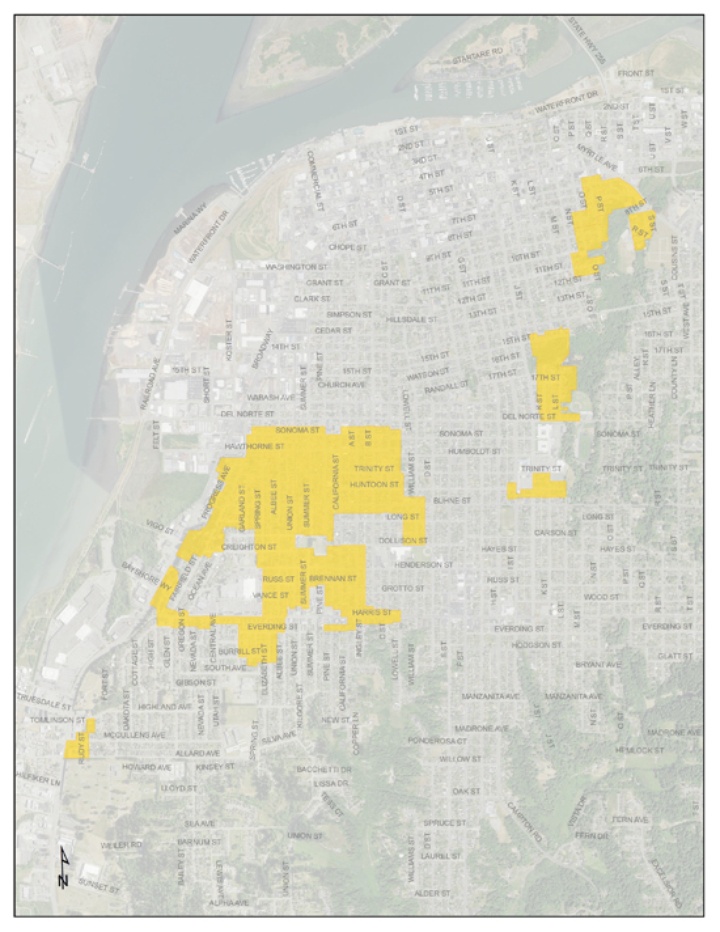 Welcome to the first installment of our fourteen-part series “Get to Know a Zone District.” In this series, a staff-member in the Planner Division answers questions about each Zoning District in the City. This month we will be exploring one of our most flexible zones: RM-2500.

So this is the zone for duplexes?

You might say that. Perhaps a better way to think of the RM-2500 zone is as a “middle step” between the single-family residential RS-6000 zone and the full-on multifamily RM-1000 zone. In practice, most City average-sized lots in this zone would “max-out” at a duplex or triplex.

What about single family homes?

Single family homes are allowed here as well. The difference is that in this zone a property owner has the option to build to a higher density if they so choose (and the site allows).

What about commercial uses, like banks and restaurants? Could those go in this zone?

Not under the current rules. This zone is all about maintaining a peaceful, quiet, medium-density residential environment. However, in the coming months the City Council will be entertaining a concept proposed by staff that would allow some existing or previously-existing neighborhood-scale commercial facilities to be located in the RM-2500 zone under limited circumstances. Examples of existing neighborhood-scale commercial facilities include Pat’ Market, Handee Market, Brick-and-Fire Bistro, and Harris & K Market. Each of these existing commercial facilities was made “non-conforming” under the 1966 Eureka Zoning Code, though they have been allowed to continue since then as “grandfathered.” The current proposal would reverse the 1966 decision and allow these residential markets to continue under limited circumstances.

What about home-based businesses? I taxidermy small woodland creatures into medieval battle scenes and sell them online. Could I do that from my house in the RM-2500 zone?

Most likely, yes. There are certain home-based business types that are allowed in this zone. A person must get what is known as a “Home Occupation Permit” from the Development Services Department first, however. Not all businesses qualify; they must be low-key businesses that won’t disrupt the neighborhood. If the business creates additional noise, traffic, etc. it probably would not be allowed.

What about Mother-in-law units? Are they allowed in this Zone?

Yes, with some limitations. Mother-in-law units, or Secondary Dwelling Units (SDUs) as we call them, are permitted. But because second units (distinct from ‘secondary units’) are allowed, it might make more sense to build a second unit if you have the room. Benefits of second units over secondary units are that second units can be built taller (35’ vs. 12’) and larger (maximum square footage for an SDU is only 640 s.f.).

Where can I get more information about other zoning stuff?

The Development Services Department (and Planning Division) is open Monday-Friday 8am to 5pm (closed from noon-1:00) at City Hall. Stop by or call 441-4160 to speak with a planner.