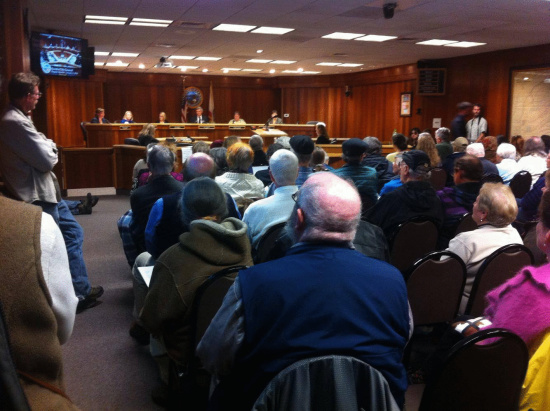 Note: KHUM DJ Bayley Brown, who happens to have a master’s degree in journalism, attended last night’s meeting of the Eureka City Council and was kind enough to take notes and forward them to the Outpost. Below is her informal report:

After several hours of deliberation and public comments Tuesday night, the Eureka City Council looked to continue its debate over declaring a citywide shelter crisis at its next meeting, Jan 19. Councilmember Linda Atkins had put forward the motion and fellow councilmember Natalie Arroyo had seconded it.

City Attorney Cyndy Day-Wilson said that it couldn’t be voted on because it was not an “action item”; it was on the agenda as a “direction to council.” After heated discussion, most council members felt that it would be best to read and have the staff look over the Declaration of Shelter Crisis Report that they had received just that evening.

State law — specifically California State Shelter Crisis Code 8698 — allows a governing body that has declared a shelter crisis to bypass some regulations and allow people to sleep in public buildings and churches.

Over the course of the open meeting, the council reviewed a report assembled by Rob Holmlund, Eureka’s director of development services. The report included estimated costs, proposed areas, and potential timelines for a camp.

It was also noted that Councilmember Natalie Arroyo may have a conflict of interest because of her work with nonprofit Redwood Community Action Agency. Arroyo responded that her position is paid through grants specifically for the area outside of Eureka.

See the Times-Standard for more coverage. And for those of you who wanted to attend but were unable to make it, you can watch the entire section of the meeting below: