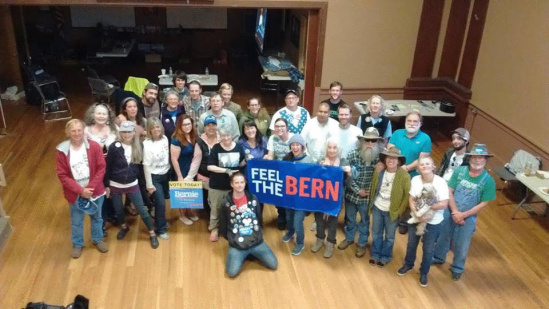 The Northern Humboldt for Bernie group at Eureka’s Labor Temple. Photo from their Facebook page.

Humboldt is the only county in California to exceed 70% for Senator Bernie Sanders in the Democratic presidential primary, and the local organizers who helped deliver this win are now poised to fight for many of the issues Sanders championed at the local level.

Totals released by the Humboldt County Elections Office on Tuesday, updated to include mail-in and provisional ballots, reflected an overwhelming level of support for Democratic presidential candidate Bernie Sanders, who beat Hillary Clinton in Humboldt County by a whopping 70.4% - 28.7%. These numbers have been submitted to the Secretary of State and are expected to be certified on July 15th.

Results for Humboldt County, as well as totals for all of District 2, can be found here.

Senator Sanders’ win in Humboldt County represents his highest margin of victory in the entire state of California. Many credit this success in large part to the organizing efforts of the local grassroots group, Northern Humboldt for Bernie (NHFB), which was formed in mid-2015 by local activists and organizers enthusiastic about Senator Sanders’ messages of justice and equality.

NHFB volunteers were trained in voter registration, phone banking, and canvassing, and dedicated hundreds of hours over the course of several months to these activities. During the final four days leading up to the Democratic primary alone, volunteers knocked on over 5,000 doors in Eureka to engage local voters and get out the vote.

“Humboldt is the only county in California where Bernie won with more than 70% of the vote. That’s a landslide and a direct reflection of the work volunteers put in ringing doorbells and making calls every day during the months leading up to the primary. The volunteer leadership, the canvas and phone bank captains and the volunteers who worked with them — everyone shares credit for the result,” according to Bernie2016 Field Organizer for California’s 2nd Congressional District, Dave Doering.

Humboldt County Democratic Central Committee Chair Bob Service comments, “The achievements of the Sanders campaign in Humboldt County have been truly amazing. I cannot overstate my respect for this achievement; nor can I escape the belief that the outcome of the primary election would have been substantially different had this organization, skill, dedication, and enthusiasm been extended across the state. The Humboldt County Democratic Central Committee is proud that many of its members were actively involved in the Sanders campaign. I look forward to expanding this relationship so that together we may build a fairer, more progressive community.”

Asked about what will become of the NHFB group after the Democratic convention later this month, one of the group’s lead organizers, Tamara McFarland responded, “We’re not going anywhere. So many of us have been inspired by Bernie’s ideas and empowered by the skills we acquired through working for his campaign. We’re excited to capitalize on this momentum and energy to begin working for positive changes at a local level, whether through ballot initiatives or by supporting progressive candidates for local office.”

Doering says, “It’s clear that lots of Humboldt County voters agree with Bernie’s progressive values. Sanders has called for the ‘political revolution to continue’ – and I really hope the volunteers who worked together so effectively will continue to work for other progressive candidates. The same energy that got 70% of the vote for Bernie can elect progressive candidates to city and county councils, state legislature, and Congress.”

McFarland reports that Northern Humboldt for Bernie volunteers are currently transitioning the group into a long-term progressive grassroots organization to work on justice and equality issues here on the North Coast. Projects will include working on local elections, providing education for citizens and activists, and serving as a central organizing point regionally for various issues such as climate justice, healthcare reform, getting big money out of politics, racial equality, and more.

Anyone interested in learning more, or joining the group, can email northernhumboldtforbernie@gmail.com, or visit Northern Humboldt for Bernie on Facebook.