Eureka Police Department PIO Brittany Powell tells us that one lane of 4th Street has been reopened.

The excavator was brought in to demolish the facade of the charred building after city officials deemed the stability of the structure to be unsafe. Footage of the demolition is posted posted below.

UPDATE, 11:27 a.m.: The excavator has gone to work, and the building is being demolished. 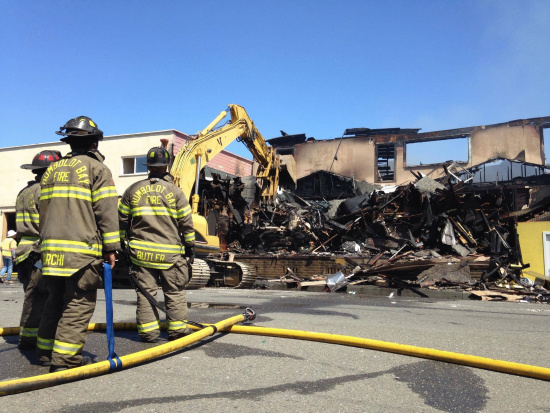 UPDATE, 10:45 a.m.: Humboldt Bay Fire Battalion Chief Chris Emmons tells the Outpost’s John Ferrara that there is still no word as to what caused the fire. “We haven’t even taken a look at it. Right now, all we are doing is getting initial statements, just trying to get an idea of where it even started in the building.”

Emmons said that the excavator pictured below is going to soon go in and tear down some walls, as the city’s building department is concerned about the stability of the structure.

UPDATE, 8:55 a.m.: Firefighters were still pouring water onto the fire as of 8:30 a.m. Video below by John Richmond. 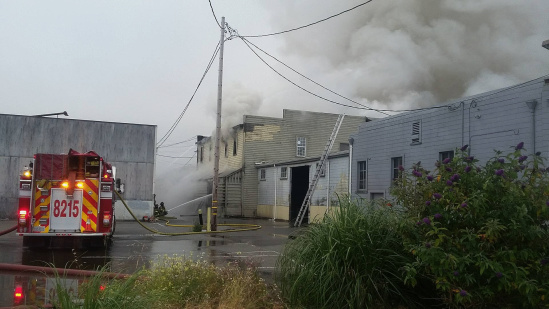 UPDATE, 7:24 p.m.: Humboldt Bay Fire Chief Bill Gillespie tells the Outpost that eight residents were displaced by the fire, which has been contained to a single building. (The apartment building and the Humboldt Honey Wine place turn out to be two parts of the same building, rather than separate structures. Fire agencies around the region have responded, either to battle the blaze directly or to cover other calls while Humboldt Bay is at the scene: Samoa Fire, Arcata Fire, Fortuna Fire, Loleta Fire, Calfire…

Fourth Street is going to be closed most of the morning. Seek alternate routes through Eureka.

UPDATE, 6:50 a.m.: The fire seems to be pretty much contained at this point as crews continue to hose down the structure. Two buildings have been gutted — the Honey Wine business and the apartment building — and another neighboring structure may have been damaged.

Fourth Street is going to closed for a good long while. 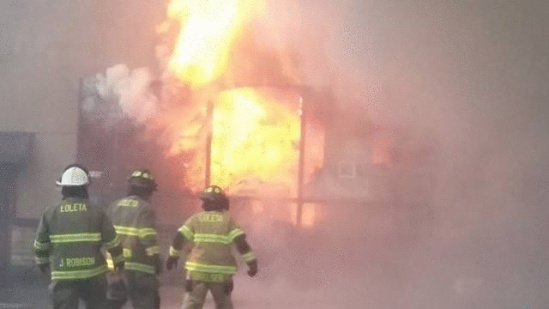 UPDATE, 6:28 a.m.: Fire crews had pretty much knocked down the flames until the little flareup pictured above occurred causing the front window of the building to crumble. Tensions are also flaring up as residents of the rear apartments vacate the area. Fire fighters are helping them load belongings into their vehicles. 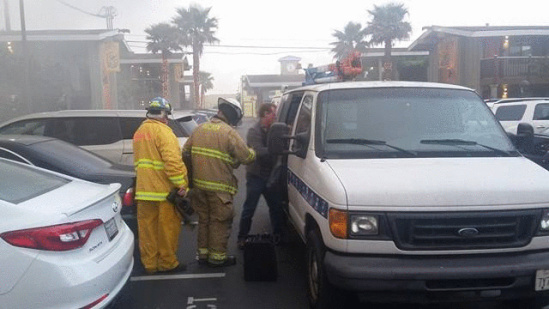 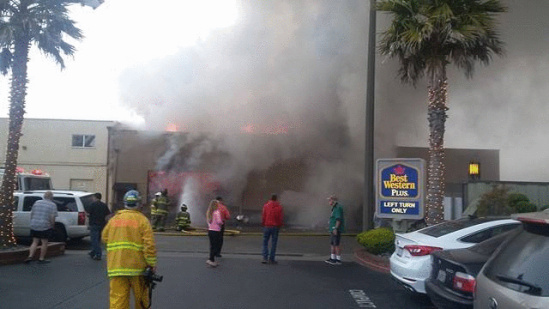 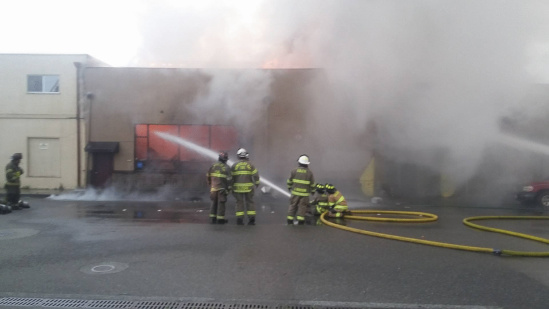 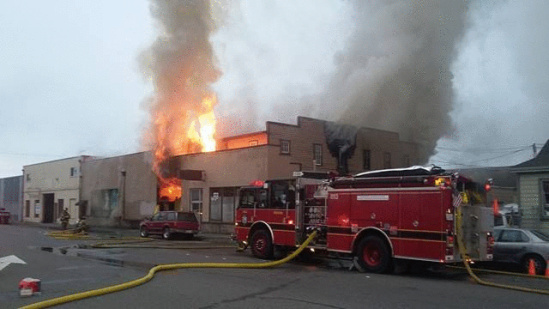 Original Post: A huge fire has erupted in a warehouse-type building in Eureka at the corner where Fourth Street turns into Broadway. Flames are pouring out of the structure and smoke is visible throughout downtown. Fourth Street is currently closed and likely will be for some time.

The blaze has drawn a huge firefighter response — The Outpost’s Hank Sims is at the scene and counts at least six engines. Humboldt Bay Fire, Loleta Fire and Samoa Fire are represented.

The front of the building carries signage that reads Humboldt Honey Wine while a connected structure in the back appears to be apartment units.

Fire crews have just started to spray water on the building causing things to get rather smokey. We will continue to update this post as the situation develops. 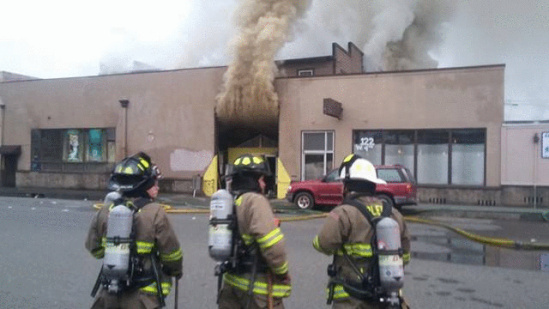 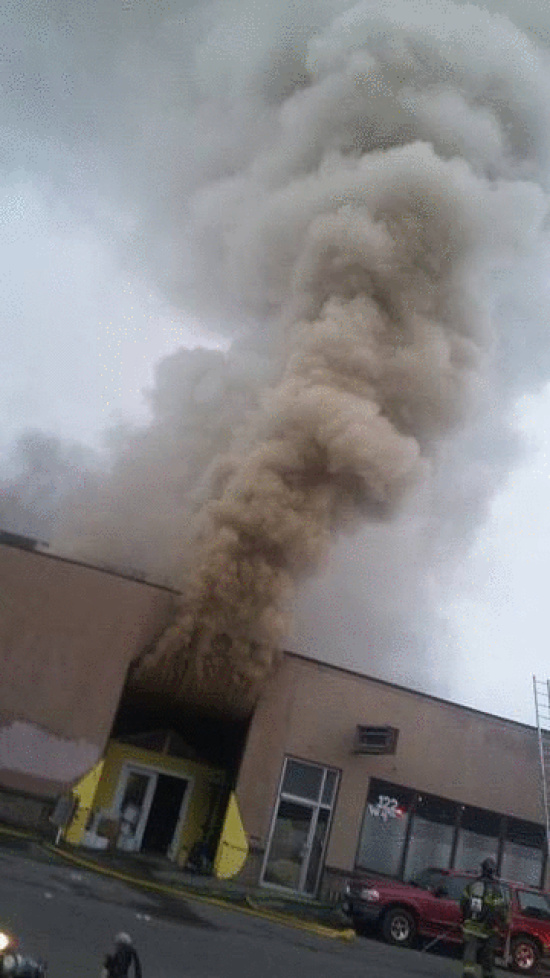 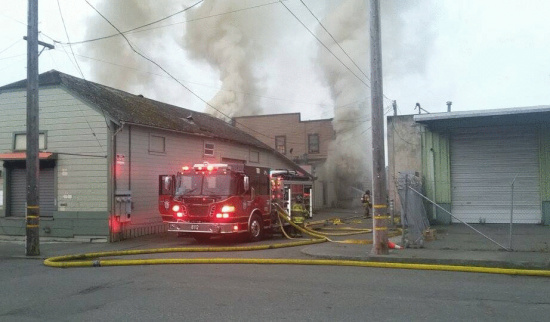 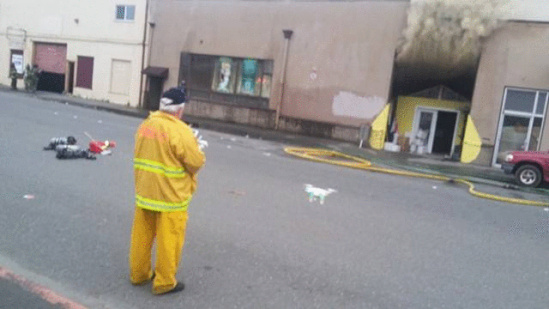 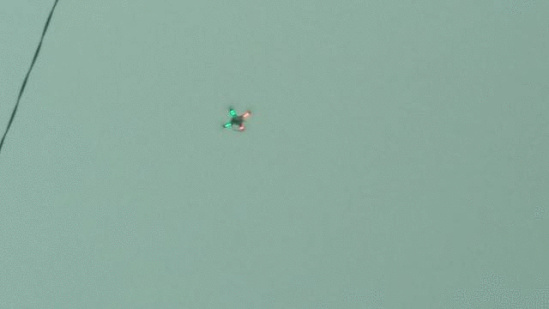 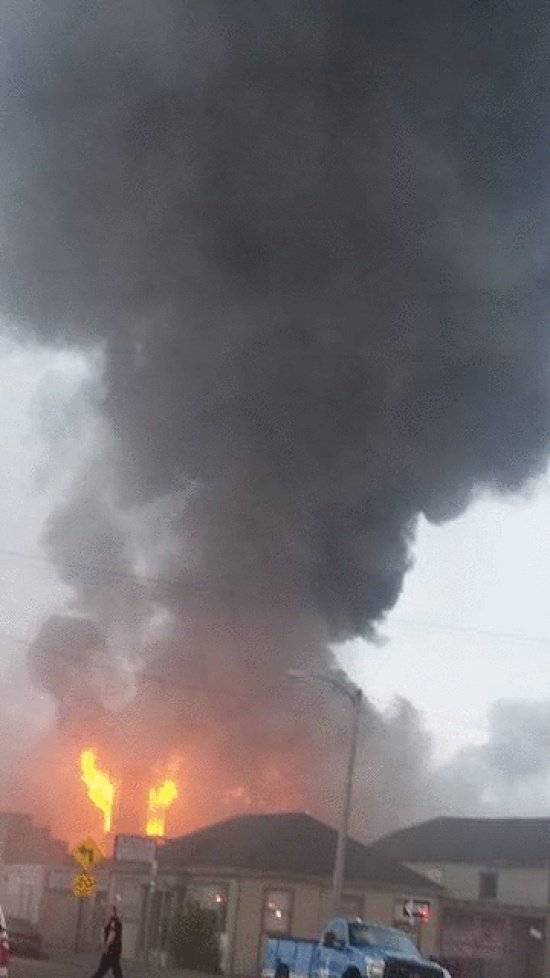 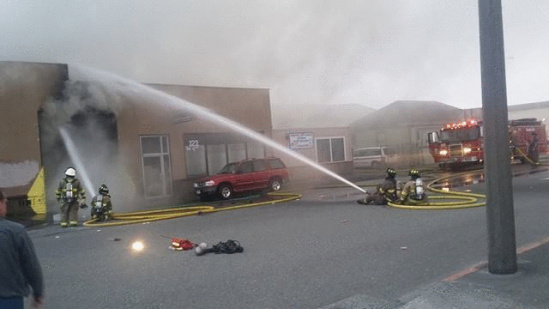