« HEY, SERIAL SHOPLIFTERS! The Eureka Police Department Has a New Plan to Keep You in Jail Longer 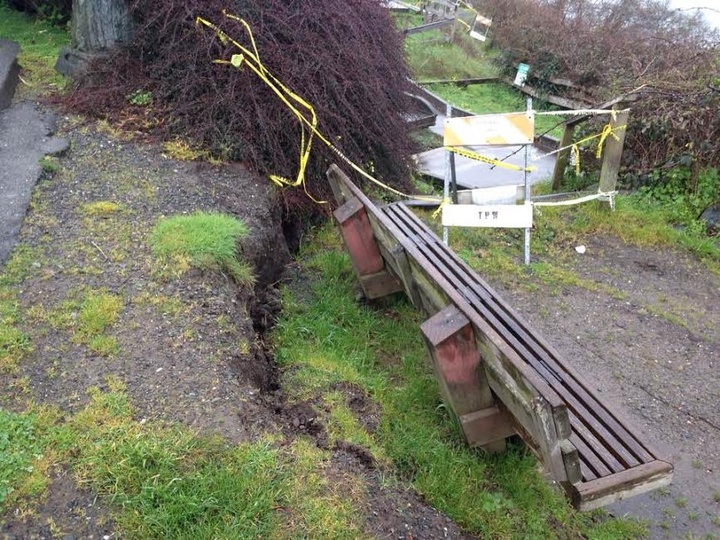 A bench at the edge of the slide that has since been removed. Photo provided by the City of Trinidad.

The present condition of the lighthouse. Photo taken today by Daniel Berman.

One of Trinidad’s most iconic hillside monuments is in danger of crumbling into the rocky seashore below.

An active landslide is sinking the lookout surrounding Trinidad’s Memorial Lighthouse, and it’s unclear how much time the city has to act before the cliffside gives way.

City Manager Daniel Berman told the Outpost today that although the slide is not directly underneath the lighthouse, it is only a few feet away, putting the monument at risk.

“There’s an active slow-moving landslide with big open cracks in the ground,” Berman said. “You can see a bunch of evidence; a big part of the land there is starting to move down the hill.”

The walkways and nearby parking spaces, mangled by the slide, have been taped off as the City of Trinidad awaits the findings of a geological assessment being done by SHN Consulting Engineers and Geologists. Berman said he expects to receive a report on the assessment sometime next week.

“The focus of the report is an initial assessment of the situation and what we are dealing with, what are the risks,” Berman said. “We’re also asking them to include initial suggestions to protect the lighthouse, parking areas and main road down the hill to the harbor.”

Although Signs of a slide were evident last winter, Berman said this year’s severe weather drastically accelerated the slide. Even as we enter the spring season the hillside continues to shift — sinking a few more inches within the last two weeks.

All other photos of the slide by local reporter Ted Pease.

“It’s not uniform — some areas are changing faster than others. When I walked it today there was a visible difference from a couple weeks ago,” Berman said. “[A sudden landslide] is not impossible, but I think what is much more likely is that it will continue to do what it’s doing — move gradually. The general condition of the bluffs around here is that they turn a little viscous and starts to ooze rather than a sudden massive landslide.”

Although the lighthouse itself — which is not owned by the city, but by the Trinidad Civic Club, is not in absolute sudden danger, Berman said the Trinidad community will work to protect the landmark, even if it means moving it to a new location.

“I think there is great interest in the city, and I hope in the county, to protect that lighthouse,” Berman said. “If it came to moving it, I think we would try to rally support to do that.”