Jurors From Goldberg Murder Trial Will Be Subpoenaed Over Misconduct; Retrial Could Be Ordered » 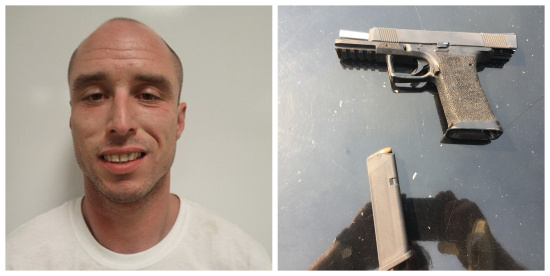 Gregory Tyrell Brunner and the gun with no serial number.| LCSO

On July 29, at 10:50 a.m., A Clearlake Police Officer who was assisting with patrols in the Scott’s Valley area observed a Ford Mustang traveling on Scott’s Valley Road near Hendricks Road in the evacuation area. The officer conducted a traffic stop on the vehicle contacting the driver who identified himself as Gregory Tyrell Brunner, 32, of Lakeport. Brunner told the officer he lived in the area and was on his way to the store. The officer determined Brunner’s driver license was suspended and placed him under arrest for driving on a suspended license and being in a disaster area. While conducting a search of Brunner’s vehicle, the officer located a loaded handgun that had the serial numbers removed. The officer also determined that Brunner was a convicted felon.

The Sheriff’s Office would like to remind the public that if they live in an evacuated area and have not evacuated, they are asked to stay at their property and shelter in place. This will help the law enforcement personnel patrolling the evacuated areas in determining people who should not be in the area and aid first responders with keeping roadways clear.